When the Census Bureau reported an increase in the number of people without health insurance in America, it sent political partisans reaching for talking points on the Obama-era health law and its travails. But the new numbers suggest that fears of the Trump administration’s immigration crackdown may be a more significant factor in the slippage.

Overall, the number of uninsured in the U.S. rose by 1.9 million people in 2018, the agency report this past week. It was the first jump in nearly a decade. An estimated 27.5 million people, or 8.5% of the population, lacked coverage the entire year. Such increases are considered unusual in a strong economy.

The report showed that a drop in low-income people enrolled in Medicaid was the most significant factor behind the higher number of uninsured people.

Hispanics were the only major racial and ethnic category with a significant increase in their uninsured rate. It rose by 1.6 percentage points in 2018, with nearly 18% lacking coverage. There was no significant change in health insurance for non-Hispanic whites, blacks and Asians.

“Some of the biggest declines in coverage are coming among Latinos and noncitizens,” said Larry Levitt of the nonpartisan Kaiser Family Foundation, who tracks trends in health insurance coverage. “These declines in coverage are coming at a time when the Trump administration has tried to curb immigration and discourage immigrants from using public benefits like Medicaid.”

Health care is the defining issue for Democrats vying for their party’s 2020 presidential nomination. Candidates wasted no time in Thursday’s debate highlighting the split between progressives such as Sens. Bernie Sanders and Elizabeth Warren , who favor a government-run system for all, including people without legal permission to be in the country, and moderates like former Vice President Joe Biden. He supports building on the Affordable Care Act and adding a new public plan option, open to U.S. citizens and legal residents.

Although the candidates did not dwell on the uninsured rate, Democratic congressional leaders have said the census figures show the administration’s “sabotage” of the Obama health law.

The administration issued a statement blaming the law’s high premiums, unaffordable for solid middle-class people who do not qualify for financial assistance. “The reality is we will continue to see the number of uninsured increase until we address the underlying issues in Obamacare that have failed the American people,” the statement said.

While the report found an increase in the uninsured rate among solid middle-class people the Trump administration wants to help, there was no significant change in employer coverage or in plans that consumers purchase directly. Those are the types of health insurance that middle-class workers tend to have. Other patterns in the data pointed to an immigration link.

Health economist Richard Frank of Harvard Medical School said the data “suggest that we are dealing with immigration ... potentially in some unexpected ways.” Frank was a high-ranking health policy adviser in the Obama administration.

The uninsured rate for foreign-born people, including those who have become U.S. citizens, also rose significantly, mirroring the shift among Hispanics.

Frank noted that immigrant families often include foreign-born and native-born relatives, “and you can imagine the new approach to immigration inhibiting these people from doing things that would make them more visible to public authorities,” such as applying for government health care programs.

Immigrants’ fears may also be part of the reason for a significant increase in the number of uninsured children in 2018, said Katherine Hempstead, a senior health policy expert with the nonpartisan Robert Wood Johnson Foundation, which works to expand coverage. Among immigrant children who have become citizens, the uninsured rate rose by 2.2 percentage points in 2018, to 8.6%. The increase was greater among kids who are not citizens.

“There are a lot of kids eligible for public coverage but not enrolled because of various things that make it less comfortable for people to enroll in public coverage,” said Hempstead.

The administration’s “public charge” regulation, which could deny green cards to migrants who use government benefits such as Medicaid was finalized this year. But other efforts to restrict immigration, including family separations at the U.S.-Mexico border, were occurring in the period covered by the report.

“People are interpreting ‘public charge’ broadly and even though their kids are eligible for Medicaid because they were born in this country, they are staying away,” said Hempstead. Children’s coverage often follows their parents’ status.

Other factors could also be affecting the numbers:

—Experts are debating the impact of a strong job market on the decline in Medicaid enrollment. It’s possible that some Medicaid recipients took jobs that boosted their earnings, making them ineligible for benefits. But if those jobs did not provide health benefits, then the workers would become uninsured. The Census Bureau report showed no significant change in workplace coverage.

TOPICS: Business/Economy; Culture/Society; Government; News/Current Events
KEYWORDS: aliens; healthinsurance; illegals; immigration; uninsured Navigation: use the links below to view more comments.
first 1-20, 21-36 next last
Hispanics, especially those of Mexican ancestry, have the highest uninsured rate. They also have the best infant and maternal mortality rate. And at the other end they have the best longevity rate.

Is there any relationship between health and insurance?

100% of people on Medicaid have insurance and they have the worst mortality rate.

Is there are relationship between health and insurance?

When we completely repatriate all of the illegal aliens we will find we have much less of a problem.

Illegals are dropping their insurance?

4 posted on 09/16/2019 3:25:52 PM PDT by jospehm20
[ Post Reply | Private Reply | To 1 | View Replies]
To: Lurkinanloomin
The AP loves debasing the English language. Notice that everywhere they use the word "immigrants" they actually mean "illegal aliens".

Legitimate immigrants have nothing to fear and are welcomed to our country. But criminal border jumpers are not "immigrants". They are criminals. They are illegal aliens and have no business participating in our health care marketplace.

We probably have that many illegals in our country. They should go back south and die there. Why should our citizens pay to keep them alive? They spread disease and use our medical resources while we pay the bills. Out, already.

“”They also have the best infant and maternal mortality rate. “”

Huh? Where did you get that from?

I’m surprised they didn’t blame it on global warming.

If illegals are afraid to be on the map they will avoid health insurance.

That’s a GOOD thing as they shouldn’t be getting it. 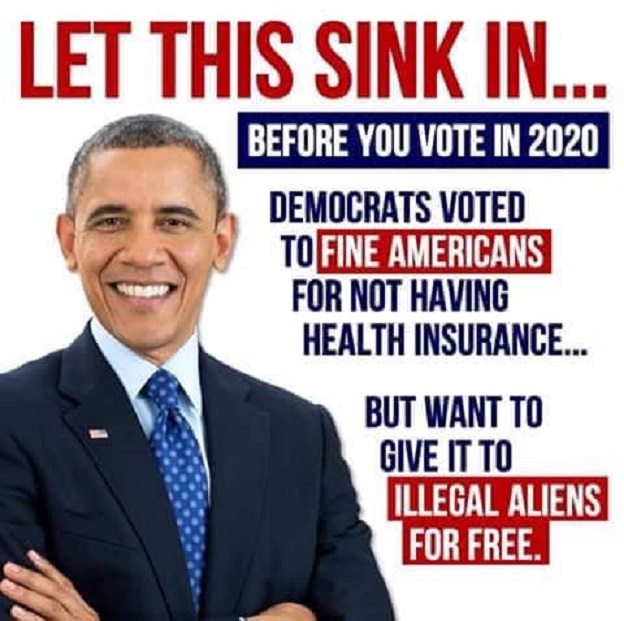 If we repatriate all the invaders, won’t we miss these hand-wringing, bed wetting, the-sky-is-falling, teeth-gnashing articles? What will we have to fill FR with and discuss?

Or, people realized their mandatory Obama care was a scam that was in effect worthless.

That being said, there do seem to be more people than ever who benefit from their health care and are living into their 90s. It's been said that baby boomers and younger are getting less healthy, every generation.

Maybe older people who lived and still live a healthy life style benefit from medical care, but those who were brought up over-medicated and over-vaccinated won't do as well. JMHO

Illegals often live in families with legal immigrants and citizens. Legal adult immigrants can be on Medicaid and SSI. Anchor babies can be on CHIPS, Kidcare, Peachcare or whatever your state calls it.

Of all demograaphic groups, those of Mexican ancestry have the lowest participation rate in welfare programs for which they qualify. Social workers are constantly having seminars on : How to reach the underserved .... translated how do we convince Mexicans to discard that chauvinism that says the man should provide and letting the government do it is an attack on his masculinity. Usually chauvinism is labeled a European cancer on the Noble Savages of the New World.

It has nothing to do with illegals, and everything to do with getting rid of the OBAMACARE MANDATE. Add to that the cost of monthly premiums, high deductibles. I told my healthy mid-20’s daughter to drop her insurance and should an accident happen, I will cover her bills.

On the contrary those of Mexican ancestry (legal and illegal) have the best infant and thematernal mortality rate. At the other end they have the best longevity rate. Mexicans are very, very healthy. One reason employers like them is that they rarely take a sick day.

Of course, in millions of them, we can find the execption to the rule.

Every healthcare statistic from hospitals, coroner’s offices, insurance companies, the CDC,conservative and liberal think tanks agrees on this.

If only those underserved people knew what was in their own self interest.