When I say “accidentally,” what I mean is that he likely didn’t know he was being secretly recorded and that his remarks would be made public.

Slate somehow got a hold of a recording of a company-wide meeting Baquet held with his left-wing staffers, and it is an illuminating look, not only at the fall of the Times’ own credibility, but how the news media in general has been infested with entitled, left-wing cry-bullies who only want to see the media used — not to inform the public — but to propagandize left-wing causes.

What I mean is that the whole reason for this meeting was to placate a newsroom full of babies who are still pouting over that one time the Times did not slam Trump in a headline.

It got trickier after [inaudible] … went from being a story about whether the Trump campaign had colluded with Russia and obstruction of justice to being a more head-on story about the president’s character. We built our newsroom to cover one story, and we did it truly well.

For two years he misled his readers into believing Trump colluded with Russia, even though there was not a shred of evidence...

Kind of reminds me of someone 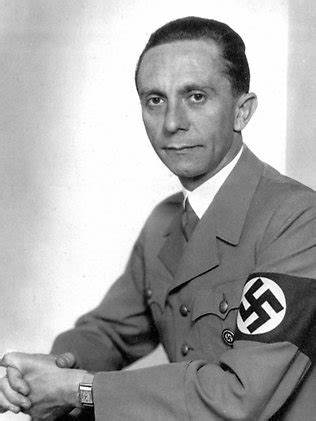 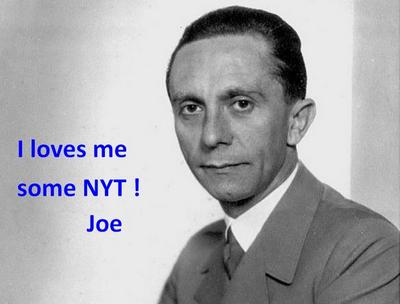 The New York Time motto was: “All the news that’s fit to print.” They need to change one word.

Nice to see you, Joe! How are the wife and kids?

"Accidently on purpose" I'd say.

7 posted on 08/16/2019 4:53:37 PM PDT by libertylover (Democrats hated Lincoln too.)
[ Post Reply | Private Reply | To 1 | View Replies]
To: tomkat
All this was inspired by the principle—which is quite true within itself—that in the big lie there is always a certain force of credibility; because the broad masses of a nation are always more easily corrupted in the deeper strata of their emotional nature than consciously or voluntarily; and thus in the primitive simplicity of their minds they more readily fall victims to the big lie than the small lie, since they themselves often tell small lies in little matters but would be ashamed to resort to large-scale falsehoods. It would never come into their heads to fabricate colossal untruths, and they would not believe that others could have the impudence to distort the truth so infamously. Even though the facts which prove this to be so may be brought clearly to their minds, they will still doubt and waver and will continue to think that there may be some other explanation. For the grossly impudent lie always leaves traces behind it, even after it has been nailed down, a fact which is known to all expert liars in this world and to all who conspire together in the art of lying.

This reads like the New York Times training manual.

Joe Biden summed it up — they all chose “truth over facts”.

Their “truth” is the narrative that OrangeManBad. There may be a lot of facts which argue against this concept, but they hold to their “truth” at all costs.

Please forgive me for making light of these murdered children.
I hope they are in heaven with so many other innocents.
May their father burn a hundred thousand painful deaths.

All the FAKE news that’s fit to print.

I did not need their admission to know.

14 posted on 08/16/2019 5:13:31 PM PDT by YogicCowboy ("I am not entirely on anyone's side, because no one is entirely on mine." - J. R. R. Tolkien)
[ Post Reply | Private Reply | To 1 | View Replies]
To: All
Exposed as a hoax, the Russian collusion story is in the rear-view mirror for Democrats and their kiss-up media pals.
However, AG William Barr, U.S. Attys John Durham and John Huber, and DoJ IG Michael Horowitz, are set to reveal
the seditious origins of the entire hoax.

AG Barr recently revealed DOJ investigations into media leaks determining how MSM had scoops
on the Trump-Russia investigation long before Congress was aware of the subject matter.

The linchpin is the Clintons.

Several top journalists and TV news anchors RSVPed “yes” to attend a private, off-the-record gathering at the New York home of Joel Benenson, the chief campaign strategist for Hillary Clinton, two days before she announced her candidacy in 2015, according to emails Wikileaks published from John Podesta’s accounts.

ITEM <><> The guest list for an earlier event at the home of her campaign manager, John Podesta, was limited to reporters who were expected to cover Clinton on the campaign trail. —snip—

ITEM <><> Wikileaks revealed earlier that late night talk host Stephen Colbert, and his team at Comedy Central, were making TV episodes at the request or order of the Clinton Global Initiative (CGI) back in April of 2013. So, viewers thought they were vote-smart because they’re informed by a comedian, yet same said comedian was doing Hillary’s bidding the whole time.

ITEM <><> Hillary frequently used the Democrats' "wrap-up smear."......leaking false info about her opponent to the media. When the obedient press published the smear, Hillary would wave it around indicating she was the superior candidate.

The Clinton Foundation listed "notable past members" they were cozy with.

This page was carried in the Clinton Foundation archives........until recently.

Glad to see your ps on that .. those childrens’ tragic fates could serve as examples (but one of many) of the awful EVIL of statism in ALL its forms.

There’s not a dime’s worth of difference in intention between Nazi Germany, Stalinist Russia, Maoist China, or the Dhimmicrat lunatics in the USA.

That was EXCELLENT - thanks.