Okay! It's time to update this. I'm sort of spurred on by this map thing: 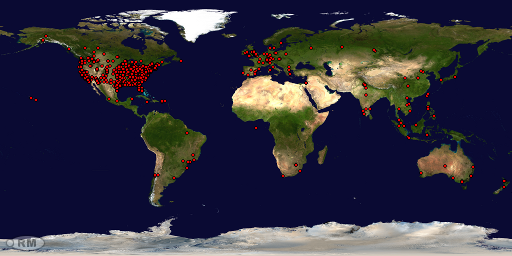 which I think is supposed to register the locations of people who visit this page.

I'm not even sure when I wrote the original version which I leave intact below. It was probably sometime around ten years ago. It's Jan 2012 as I type now. I only rarely call talk radio these days. And I missed a Travers back in 2008 when I decided to attend the wedding of a cousin in Israel that started about 40 hours after that year's race was declared official. My current stick-my-neck-out prediction, which I've been stating for a year or two already, is that there will not be a US Presidential Election in 2012. I see Obama as a "One man - One vote - One time" kinda guy.

Original version of this page follows >>>

Back in December of '93 I thought Bill Clinton would be out of office by the Vernal Equinox of 1994, because real news began leaking out about the murder of Vincent Foster. I was wrong about that, and I was also wrong about my prediction sometime in 1998 that the Commodities Scam Queen would be the Democratic nominee for President in 2000.

Besides that, I think I have a pretty good track record.

Some of you may know me as "Mike from North Caldwell." I've been on Rush's show about 20 times, and I used to be a regular caller to Bob Grant. During the past year I've only made a couple of talk radio calls though.

Others may know me from my "Who Killed Vince?" confetti, that I've sprinked about at various FR events; and that I leave in airline seat pockets and hotel phone books. (Each says "Who Killed Vince?" on one side and has a selected fact on the reverse.)

I've been posting my ideas and reading those of others since before my Vernal Equinox prediction. I started on Compuserve, then I moved through usenet, and on to FR and a couple of closed lists.

I'm passionate about the things I like. I've attended every Travers Stakes since 1967.