Textually, the amendment itself is almost toothless and easily amenable to regulation. Hell, “regulated” is written right into its text: A well-regulated Militia, being necessary to the security of a free State, the right of the people to keep and bear Arms, shall not be infringed.

See. You don’t have to be a constitutional scholar to conclude that this amendment is talking about the need for “militias,” not an individual’s right to own a bazooka; and you don’t have to be a historian to noodle out that the founding fathers—who revolted against a global superpower—thought that state militias were pretty cool.

It was only in the 1970s that the National Rifle Association basically invented the new constitutional theory that the Second Amendment conferred a personal right to own military grade weapons for “self-defense.”

Saw off, lib rag Nation, and take Ellie with you.

I think go back to UK and call it a day

What they meant by this is well equipped.

The militia supplied their own weapons. After the Democrat government assault at Waco that killed children.....

The Democrats want to commit politicide on us.

This idiot doesn’t understand the purpose of the Second Amendment.

10 posted on 08/07/2019 6:57:16 PM PDT by rllngrk33 (Time for all patriotic Americans to boycott liberals and all SJW/PC bullsh*t.)
[ Post Reply | Private Reply | To 1 | View Replies]
To: lowbridge
Those ignorant pimps. If their logic was correct then countries with no 2nd Amendment would have no gun homicides, but that's not accurate.

If their logic was correct then the stricter the gun laws in different state in the US, the strictest states concerning gun laws would have correspondingly lower gun homicides. Also false.

Gun laws have nothing to do with gun homicides. In fact, it seems that areas of the country that are gun free are actually more prone to gun homicide.

It was only in the 1970s that the National Rifle Association basically invented the new constitutional theory that the Second Amendment conferred a personal right to own military grade weapons for “self-defense.”

Bulls%#t. It was well known from the 1700s on that it meant personal ownership, not just militias.

We’ve got a real student of history here.

Let’s get rid of the first half. Have the Second Amendment simply read “The Right to Keep and Bear Arms Shall Not be infringed.

One woman (and not very bright one..) opinion...

We should split the country before cw2.
This will not end well. I don’t know anyone who is giving up their guns. 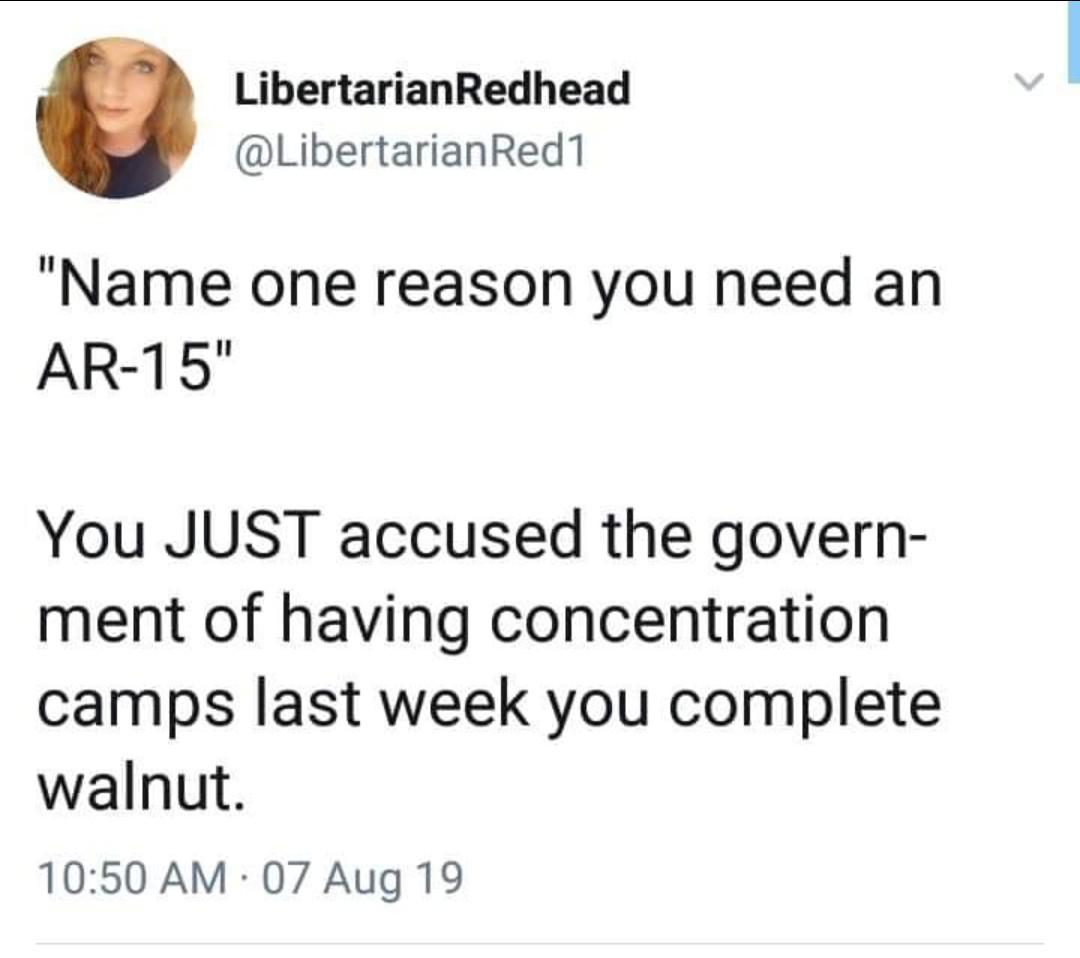 Is that Ellie, the author of this drivel?

18 posted on 08/07/2019 7:03:02 PM PDT by Jane Long (Praise God, from whom ALL blessings flow.)
[ Post Reply | Private Reply | To 8 | View Replies]
To: lowbridge
The liberal fascists have long promoted the mythology that the understanding of the second amendment was always a "collective right" until the NRA created the idea that it was an individual right, presumably sometime during the 1960's.  This is all projection on the part of the liberal fascists.   The mythology that the second amendment refers to a collective right instead of to individuals was created out of whole cloth by the Kansas Supreme Court in 1905, as the "Progressive" movement gained cultural clout and power.

Here is a summation of the liberal fascist mythology from The Huffington Post:

Following the Sandy Hook massacre, gun rights, gun laws and the Second Amendment have been the subject of a national dialogue. Any discussion of these topics is severely tainted by calculated messaging by the NRA to deceive and mislead our citizens to believe that the Second Amendment grants far reaching gun rights which have not and do not exist.

The Second Amendment became part of our constitution in 1791. For well over two centuries the Supreme Court never decided that the Amendment granted a constitutional right to individuals to bear arms. The widely held notion that such a right existed was a myth fabricated by the NRA for its own self interest and for the corporate profits of gun manufacturers. This fabrication altered the mindset of most Americans to accept fictional Second Amendment rights that permitted the proliferation of all manner and kind of dangerous weapons. We became a gun culture run rampant. The gun manufacturers reaped enormous profits as gun sales soared. In 2011 industry wide gun sales were $4.3 billion. Misconceptions generated by the NRA created a warped interpretation of Second Amendment that generated these sales.

The author then goes on to cite a number of prominent progressive judges and lawyers who all spout the "collective right" mythology.

One of the more famous of these quotes is from Chief Justice Tanney in the Dred Scott case, explaining why Negros could not be considered citizens:

It would give to persons of the negro race, who were recognised as citizens in any one State of the Union, the right to enter every other State whenever they pleased, singly or in companies, without pass or passport, and without obstruction, to sojourn there as long as they pleased, to go where they pleased at every hour of the day or night without molestation, unless they committed some violation of law for which a white man would be punished; and it would give them the full liberty of speech in public and in private upon all subjects upon which its own citizens might speak; to hold public meetings upon political affairs, and to keep and carry arms wherever they went.

There has been considerable scholarship on this issue and the idea that the second amendment was only considered a collective right for the first two centuries of its existence is simply laughable.   There are a number of other cases quoted here.

It was the rise of "Progressivism" that created the collective rights myth, and we know just where it was done;  In the case of Salina v. Blaksley, decided by the Kansas Supreme Court in 1905.

The First Collective Rights Decision
From the brief:


In Salina v. Blaksley , 72 Kan. 230, the court, in referring to the provision of the State Constitution declaring that the people had the right to bear arms for their defense and security, said (pp. 232- 233):


That the provision in question applies only to the right to bear arms as a member of the state militia, or some other military organization provided for by law, is also apparent from the second amendment to the federal constitution...

Here is what Halbrook says about the above decision:

...in Salina v. Blaksley (1905), the Supreme Court of Kansas, in upholding a conviction for carrying a revolver while intoxicated, took a restrictive view of both of the relevant state constitutional provision, guaranteeing arms possession for defense and security, and of the federal Second Amendment: the court declared that only "the right to bear arms as a member of the state militia" was intended. Contrariwise, the court treated the federal provision as applicable to the states and agreed that the "legislature can regulate the mode of carrying deadly weapons, provided they are not such as are ordinarily used in civilized warfare" The collectivist approach taken in Salina, that the relevant constitutional provisions only referred to the right to bear arms in a military organization provided by law, "went further than any other case" except for the opinion of one concurring judge in the early Arkansas case of State v. Buzzard. [Emphasis added] This approach appears illogical on its face: the members of a military organization constitutionally provided for by state law could hardly need any state constitutional right to bear arms.

Compare the above decision to one by the Michigan Supreme Court, People v. Brown (1931). Note this decision was only a few years before the Miller case, but we'll see why the government wouldn't quote anything from this case! Again Halbrook, quoting from People v. Brown:


When the bulwark of state defense was the militia, privately armed, there may have been good reason for the historical and military test of the right to bear arms. But in this state the militia, although legally existent and composed of all able-bodied male citizens...is practically extinct and has been superseded by the National Guard and reserve organizations... The historical test would render the constitutional provision lifeless. The protection of the Constitution is not limited to militiamen nor military purposes, in terms, but extends to "every person" to bear arms for the "defense of himself" as well as of the state.

The liberal fascists went on to win the presidency under Hoover, and the presidency and both houses of Congress under Franklin Roosevelt.   Then they enacted the first sweeping federal gun control law, the National Firearms Act of 1934.   The act was soon challenged with a test case contrived by a "Progressive" judge designed to gain Supreme Court approval for the constitutionality of the law.   Judge Ragon did not allow the defendant, Miller, to plead guilty as he desired, but carefully constructed a test case designed to circumvent the clear unconstitutionality of the National Firearms Act.

Even with such obvious deck stacking as the defendant not being represented before the Supreme Court, the Miller decision is reasonably clear that the right to keep and bear arms extends to individuals, merely stating that the arms must have some relationship to military usefulness.  From Miller:


In the absence of any evidence tending to show that possession or use of a 'shotgun having a barrel of less than eighteen inches in length' at this time has some reasonable relationship to the preservation or efficiency of a well regulated militia, we cannot say that the Second Amendment guarantees the right to keep and bear such an instrument.

And, a little later:


The signification attributed to the term Militia appears from the debates in the Convention, the history and legislation of Colonies and States, and the writings of approved commentators. These show plainly enough that the Militia comprised all males physically capable of acting in concert for the common defense.


Not many people were interested in challenging the issue in 1940.   Miller had been decided for individual rights, even if it could have been worded better.   The NFA was not aggressively enforced.  World  War War II and four terms of the Roosevelt revolution cemented "Progressive" control over the courts.

A number of activist judges in the lower level courts deliberately misinterpreted Miller to mean that there was no individual right to bear arms.  Few people were interested in machine guns and sawed off shotguns, and "gun control" remained quiescent until the current push for civilian disarmament started in the mid 1960's.  Most of the federal appeals cases can be seen at this site.  It is clear that they do not cite Miller accurately, often simply stating incorrectly that Miller found that the second amendment did not apply to individuals!

It is true that considerable scholarship was done during the current push for citizen disarmament from the 1970's to the present.  The scholarship showed that the second amendment had always been an individual right, just as it had been presumed to be up until 1905.  This had been decided so conclusively by academics that it had come to be known as the Standard Model by the time of the Heller decision.

Liberal fascists are particularly good at projection.  They constantly accuse their opponents of what they are openly doing.  The idea that the NRA created an individualist myth of the second amendment is an almost exact inverse of what really happened.   It was liberal fascists who created the "collective right" myth, starting with the Kansas Supreme Court decision of 1905.

©2013 by Dean Weingarten: Permission to share is granted when this notice is included.
Link to Gun Watch