Brooklyn: Mosque spokesman says women who show “any indication” of their form are cursed, disobedient and deviant

Why should anyone expect Ali Abdul-Karim Judan to have any different view of women?

The Qur’an teaches that men are superior to women and should beat those from whom they “fear disobedience”: “Men have authority over women because Allah has made the one superior to the other, and because they spend their wealth to maintain them. Good women are obedient. They guard their unseen parts because Allah has guarded them. As for those from whom you fear disobedience, admonish them and send them to beds apart and beat them.” — Qur’an 4:34

It declares that a woman’s testimony is worth half that of a man: “Get two witnesses, out of your own men, and if there are not two men, then a man and two women, such as you choose, for witnesses, so that if one of them errs, the other can remind her” — Qur’an 2:282

It allows men to marry up to four wives, and have sex with slave girls also: “If you fear that you shall not be able to deal justly with the orphans, marry women of your choice, two or three or four; but if you fear that ye shall not be able to deal justly, then only one, or one that your right hands possess, that will be more suitable, to prevent you from doing injustice” — Qur’an 4:3

It rules that a son’s inheritance should be twice the size of that of a daughter: “Allah directs you as regards your children’s inheritance: to the male, a portion equal to that of two females” — Qur’an 4:11

It allows for marriage to pre-pubescent girls, stipulating that Islamic divorce procedures “shall apply to those who have not yet menstruated” — Qur’an 65:4

A local Brooklyn mosque with a checkered history and once surveilled by the NYPD continues to promote radical content online.

Ali Abdul-Karim Judan, mosque spokesman and head of security for the at-Taqwa Mosque in Bedford-Stuyvesant, Brooklyn, posted a video on Facebook Live titled, “Are Muslim Women Who Are Covered According to What Allah Has Legislated in the Qur’an and Women Who Are Not Judged Equally?”

In the video, Karim argues that women who do not fully cover their bodies and who show “any indication” of their form, are “cursed,” “disobedient” and “deviant.” This includes “any woman who wears perfume in public,” as well as members of the trans community.

Preaching to a Facebook audience of over 5,000 followers, Karim claims that God’s laws assign men and women “different roles,” and that men are the designated “maintainer” of women.

He discusses the Islamic concept of Tabarraj, or “beautification,” which he argues is “forbidden” and “so abhorrent that it is associated with fornication, stealing and all other sins.”

He concludes that Allah does not judge equally women who are dressed in “clothes of righteousness” and those who are not, calling the issue of women’s dress a “crisis” in society that must be “managed.”

Despite its association with supposedly progressive Islamic organizations such as CAIR, MAS and ISNA, the at-Taqwa Mosque revealed itself to be an illiberal institution that espouses demeaning views toward women and the transgender community.

It is worth noting that the Council on American-Islamic Relations (CAIR), a prominent Islamic organization that emphasizes an alliance with progressive groups, claims to stand for women’s rights, and uniformly endorses Democratic candidates in local, state, and federal elections, has a close relationship with at-Taqwa.

SIRAJ WAHHAJ, the mosque’s leading imam and a regularly featured speaker at CAIR’s annual banquets, has called homosexuality a “disease” punishable by death, and declared in 1992 that he would set fire to a proposed mosque in Toronto that was tolerant of the LGBT+ community. Wahhaj previously defended stoning and other forms of punitive violence and, on several occasions, has come to the defense of convicted terrorists, including Omar Abdel-Rahman, otherwise known as the “Blind Sheikh,” who masterminded the 1993 World Trade Center bombing and inspired dozens of other terrorist plots

By golly that's one thing he is right about!

Wait, where are my glasses....

In the video, Karim argues that women who do not fully cover their bodies and who show “any indication” of their form, are “cursed,”...

Man, I had insecurity problems back in the day when it came to women (now if the guy is rich and pays our bills she has my permission to cheat).

But these nutcases take the cake.

And it IS insecurities driven to their furthest extremes.

It should not be hard to psychologically outwit these idiots as part of a battle plan.

Ilhan Omar needs to to go have a talk with that guy...LOL 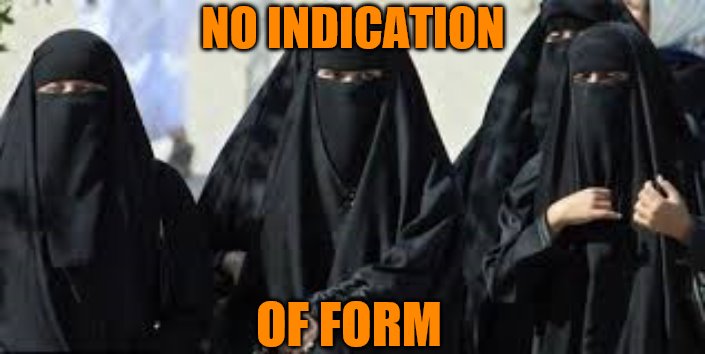 agreed to by many on the left, supported and protected by the politicians and the media, its white supremacist men and evil Christianity they need to worry about

I know a lot of women I wish they’d try that crap on.

My theory of why Muslim women, eh, look the way they do. Let’s just say there is no market place for beauty which would lead to an advantage in the gene pool.

Someone should ask him what he thinks of Omar

This is the ultimate fat-shaming. A woman who has gained a few pounds is bound to reveal more of her form.

This omar dude has a problem, it is called the 21st century. Someone needs to shove a cork in this asshole.

Maybe just send him back to his cave and close the door for good on him.

And it IS insecurities driven to their furthest extremes.


It’s religion. Muslim men need the ‘training wheels’ of oppressed women to keep them from thinking the lusty thoughts that Allah will condemn them to hell for. If the only lovely shape you ever see is that of your wife while in your own home (presumably with a young boy for sex because regular sex is revolting, I guess), then the guardrails are in place to prevent your driving off the narrow road.

It’s all about control of poontang, isn’t it mullah?

Mullas are cursed, disobedient and deviant.

Do you hear that, Omar? You need to go FULL NIQAB!!

Pretty sure we can all be thankful those “women” are covered. Every time I see an Arab women I understand the Burka. It is well deserved and a welcome eye salve.

This idiot’s words will only incite more Muslim violence against `uncovered’ women.

But since this is America and not UK, France, or Germany, it could mean more women explaining to police how their Muslim attacker got those fatal bullet wounds.

18 posted on 07/28/2019 12:09:42 PM PDT by elcid1970 ("The Second Amendment is more important than Islam.")
[ Post Reply | Private Reply | To 15 | View Replies]
To: dp0622
I had a professor of Ottoman History who (this was before any such conjecture would get a college instructor tarred and feathered) attribute Muslim males' misogyny to their being circumcised when young adolescents. He'd spent a lot of time in Turkey and had no illusions about any "Religion of Peace" nonsense.

At least in Turkey there's a whole ritual involved, like a surgical bar mitzvah, that is hugely traumatic even before the cutting begins. Add in generations of consanguinity in marriage and you've got a really f***ed up population numbering in the hundreds of millions.

Bedford-Stuyvesant was a Jewish neighborhood a generation ago. Couple of friends of mine in LA grew up there, really brilliant guys. They loved women.