NEW YORK (WCBS 880) — An emotional Jon Stewart, who was on Capitol Hill on Tuesday for a Congressional hearing on the 9/11 Victims Compensation Fund, was given the turnout coat of FDNY legend Ray Pfeifer, who died from 9/11-related cancer two years ago.

Pfeifer, who served more than 27 years with the FDNY, was at the World Trade Center after the buildings collapsed on Sept. 11, 2001 and worked for months on the toxic pile at ground zero.

He was diagnosed with cancer in 2009 and made the trip to Capitol Hill dozens of times to lobby for 9/11 health and compensation bills before his death at age 59 in 2017.

Really goes to show why they have such an abysmal approval rating.

Am I the only one who sees Stewart as a publicity seeking drama queen?

Yep! They are trying to give themselves a 4,500 dollar raise while ignoring real heroes. Congress is cess pool. Those that stayed away from that hearing yesterday are the lowest of pond scum.

Because these firefighters do not make them millionaires like their pet interests do. I saw Stewart speaking and while I might not agree with a great many things he’s stood for with his antics and other things, he really did show that great deal of sincerity in his speaking for these people in that instance.

He’s a leftist but a reasonable one. He looks like William Buckley compared to scum leech Stephen Colbert.

I heard that slip and fall lawyers got involved and started getting disability payments for everybody who was near the towers..

Does anyone know if this is true?

And the Left wing d-bag couldn’t even be bothered to shave before he went before Congress and the public — Letterman’s little brother.

Stewart is shilling for their unions.

The unions want a bailout.

Yes. I agree. Stewart has spoken up before on this sorrowful subject. I guess it’s true...there is something good in almost every human being, even John Stewart.

I’ve heard similar — a huge slush fund for NYC employees who already have gold-plated Cadillac health care plans. Same as every veteran who even heard of Iraq or Afghanistan has PTSD and merits 100% disability. The Left making everyone a victim and requiring taxpayers foot the bill.

Don’t know why Stewart is complaining, the subcommittee is part of the Judiciary Committee which was working on the all important milking of John Dean, and pre-Impeachement hearing so OF COURSE the members couldn’t be there John! We KNOW you’re itching for an impeachment because YOU ARE a TV comedian and that’s what comedy is all about now.

While I have no problem with Congress appropriating money to help legitimate "first responders" in a case like this, there is an angle to the whole 9/11 aftermath in NYC that doesn't get a lot of attention.

For one thing, many of the people experiencing these health problems weren't the initial firefighters and police personnel on the scene on 9/11, but were there for months afterward. There was no urgency to the work these NYC personnel were doing, and after the shock of the attack wore off the whole thing rapidly declined into an overtime scam for municipal workers and unionized construction workers. A contractor I know had volunteered to have his crews and equipment help with the cleanup at no cost, but he was told he could not help because his workers were not represented by a union.

The firefighters got into the act by getting the NYC government to agree that FDNY "honor guards" would be on the scene at all times during the cleanup -- to carry away the remains of any firefighters recovered at the scene. You can go to the 9/11 Memorial website today and find dozens of images like this showing this type of scene: 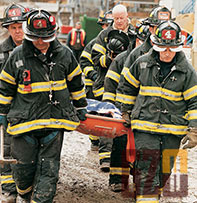 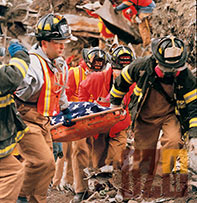 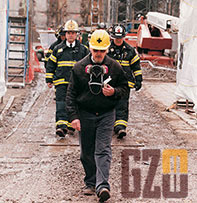 Keep in mind that this wasn't even close to a rescue operation anymore. There wasn't even a need to have any of these first responders on the scene at all. Most of the photos shown here were taken in the spring of 2002.

I'm sure this ain't politically popular for me to say this, but if I were a member of Congress I wouldn't vote to authorize one more penny of Federal money for any "victims compensation fund" anymore.

Pelosi is busy trying to take down the President. Schumer is even busier trying to get out from under Pelosi.

No. He is a POS. The 9/11 Victims Compensation Fund wasn’t for First Responders as he portrayed in his little drama act before Congress. It was for ANYBODY that claimed they were a victim of the event and to receive compensation they couldn’t sue the airlines. It was run by the corrupt DOJ. They knew the truth would come out during a lawsuit against the airlines so they bought people off with this money. Look what happened to Beverly Eckert when she refused to take the money and was going to sue to get to the truth. She went before Congress too.

Not a big fan, but he is on the right side on this one.

I saw that on Martha McCallum’s show yesterday. Those who were ‘near’ the towers have been claiming need and have been depleting the fund. Maybe it would behoove those awarding monies, to investigate the claims rather than just giving away money.

It's about time someone got past the political games that have become more important than solving problems. He blamed all of them! Wouldn't it be wonderful if all us little folk realized that NONE of them put us first?

True there is an avalanche of ads on the radio in NY asking potential victims to seek redress. Some are very authentic like the one on 104.3 FM. The reality is that EPA boss Christy Todd Whitman told everyone ten days after 9/11 that it was safe, so businesses reopened and residents returned. At the time I was teaching in a JHS in Sunnyside oh 5 miles straight line from GroundZero. We could still smell the crap emanating from the Pile. EPA said it was safe. It wasnt. In a way this is like people dying of radiation poisoning 10 years after Hiroshima. Radical Islam is still claiming victims from 9/11 with US Govt’s help.

I have questions about attributing all cancers of responders to 9/11, since nearly 40% of all men eventually have some form of cancer. Essentially, US taxpayers are being asked to give money to all responders who get cancer over their lifetimes.

FReepers, 95.945% of the Second Quarter FReep-a-thon goal has been met.  Click above and pencil in your donation now.  Please folks, lets end this FReepathon.  Thank you!