John Diepersloot squinted under a bright Central Valley sun, pointing to the damage to his fruit orchard that came with the California bullet train.

He lost 70 acres of prime land. Rail contractors left mounds of rubble along his neat rows. Irrigation hoses are askew. A sophisticated canopy system for a kiwi field, supported by massive steel cables, was torn down.

But what really irritates Diepersloot is the $250,000 that he paid out of his own pocket for relocating wells, removing trees, building a road and other expenses.

“I am out a quarter-million bucks on infrastructure, and they haven’t paid a dime for a year,” he said. “I don’t have that kind of money.”

Up and down the San Joaquin Valley, farmers have similar stories. The state can take land with a so-called order of possession by the Superior Court while it haggles over the price.

But farmers often face out-of-pocket costs for lost production, road replacement, repositioning of irrigation systems and other expenses, which the state agrees to pay before the final settlement.

Those payments and even some payments for land have stretched out to three years. State officials have offered endless excuses for not paying, the farmers say.

Eminent domain, the legal process by which government takes private land, is complicated enough, particularly in California with a maze of agencies involved. But the rail authority’s constantly changing plans, thin state staff and reliance on outside attorneys have made it more difficult,

Tos, the farmer who is waging a legal fight against the project, said that state agents during negotiations had shown a surprising lack of knowledge about agriculture.

I’m from the government. Now bend over, so I can help you... 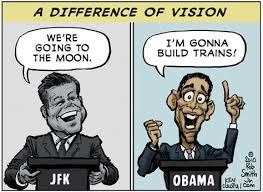 3 posted on 06/11/2019 4:38:55 AM PDT by Vaquero ( Don't pick a fight with an old guy. If he is too old to fight, he'll just kill you.)
[ Post Reply | Private Reply | To 1 | View Replies]
To: george76
“They shouldn’t have run this through the breadbasket of the state,” Wasser said, echoing a sentiment of the rail system’s critics that the state should have aligned the route adjacent to Interstate 5 and not through the nation’s richest agricultural belt.

These farmers are mainly white, therefore not deserving of any justice.

The state keeps this up and they will see true justice.

Their ability was to fork over huge tracts of their their rich, valuable farm land and spend millions of their own money rearranging their farm operations to accommodate the choo-choo. 8 posted on 06/11/2019 5:02:17 AM PDT by ProtectOurFreedom
[ Post Reply | Private Reply | To 6 | View Replies]
To: george76
When the rail authority wanted a strip of his land for a temporary construction easement, an agent suggested that Tos transfer his mature walnut trees to pots for five years and then put them back in the ground. “They don’t know what a walnut tree is,” Tos said.

It would be interesting to know who this particular state employee is, how he was hired, and what his educational background might be. There are a lot of good people in state and federal agencies, people who know their field and have enough dirt under their fingernails to know what is involved in a project. A state DOT/highways guy, for example, has probably been building roads most of his life and knows a good deal about moving dirt. But … it's not uncommon to find transportation planners who are oblivious to the damage done by driving their projects through the heart of attractive, livable neighborhoods, or state and county highway guys who try to build roads through the heart of a Civil War battlefield or other historic resource. In this case, the state guy sounds like an urbanite who thinks farms are on the backside of the moon and wouldn't know a tree if it fell on him.

FReepers, 92.976% of the Second Quarter FReep-a-thon goal has been met.  Click above and pencil in your donation now.  Please folks, lets end this FReepathon.  Thank you!
...this is a general all-purpose message, and should not be seen as targeting any individual I am responding to...

For sure. By forcing the citizens to use trains for transportation, they can control movement.

I think we can see how this is going to go: the California leftists are going to tell the farmers they would be paid were it not for the Trump administration halting payments. Therefore Orange Man bad, not them.

Hey, they’re mostly White and Republican, so no big deal.

I am shocked, SHOCKED at your cynicism!

They are doing business with a criminal enterprise. I would expect it to get worse.

How else can Ca give free land to the illegals.

California has to pay for illegals medical costs.