A $2 trillion mistake? Here’s what Washington must do to get infrastructure right
The New York Post ^ | May 15, 2019 | Brian Riedl

President Trump and Democratic leaders have discovered the one policy that unites Washington: spending money we don’t have. Yet their bipartisan pledge to spend an added $2 trillion on infrastructure over the next decade faces serious obstacles if these leaders are to responsibly improve our infrastructure.

First, Washington should spend only as much as it is willing to offset with other savings. Putting $2 trillion on the national credit card would boost deficits that are already on course to surpass $2 trillion a year within a decade, due mostly to entitlements.

These deficits are projected to push ­annual interest costs over $1 trillion. And if interest rates merely return to 1990s levels, interest on the debt will become the largest part of the budget. Yet Democrats are already calling for $40 trillion in other new spending over the decade, and Republicans just cut taxes by $2 trillion. Something has to give.

At the same time, $2 trillion is too much to finance in taxes. The $1,500-a-year-per-household cost would require either raising the federal gas tax to $1.53 per gallon from 18.4 cents or raising all income-tax rates by 2.2 percentage points. A different approach is needed — one with a much smaller price tag that is also offset with spending cuts.

Lawmakers should also drop the illusion that infrastructure will bring economic stimulus. House Speaker Nancy Pelosi recently said this initiative is “about jobs, jobs, jobs.” Yet with the unemployment rate ­already at 3.6% — the lowest since the 1960s — there is no significant slack in the economy to mobilize. All the government can do is transfer capital and jobs from one part of the economy to another.

Are there really two trillion dollars worth of Federal ifrsstructure??

The moment the government gets a credit card it’s all downhill.

In my area it’s been built and rebuilt continually since the 60’s. I am sure we could do it all again.

Although there is one bridge that a highway engineer told me to avoid—and if I couldn’t, he said the speed over it. It’s going to fall down.

“Lawmakers should also drop the illusion that infrastructure will bring economic stimulus. House Speaker Nancy Pelosi recently said this initiative is “about jobs, jobs, jobs.” Yet with the unemployment rate ­already at 3.6% — the lowest since the 1960s — there is no significant slack in the economy to mobilize. All the government can do is transfer capital and jobs from one part of the economy to another.”

Too rosy of a jobs outlook, too gullible to government statistics. The government unemployment rate is a function of politics and constantly changing definitions and demographic/economics methodologies. U6 is still at 7.3%. And even that is probably a low estimate.

Why can’t states pay for their own damn roads?

Putting $2 trillion on the national credit card would boost deficits that are already on course to surpass $2 trillion a year within a decade, due mostly to entitlements... Pelosi recently said this initiative is "about jobs, jobs, jobs." Yet with the unemployment rate already at 3.6% -- the lowest since the 1960s -- there is no significant slack in the economy to mobilize.

Lets put a little perspective on this $2 trillion.

Assume, we raise the tax on gasoline to cover this. How much would tax have to be to pay it of in say a year and a half?

Can you afford that?

They never tax us to pay for this stuff. The just crank up the debt. At some point, our creditors have to say “The U.S. is in a deep hole and there is serious risk of default. We demand a HUGE risk premium if we are going to loan you any more money.” Then all hell is going to break loose. 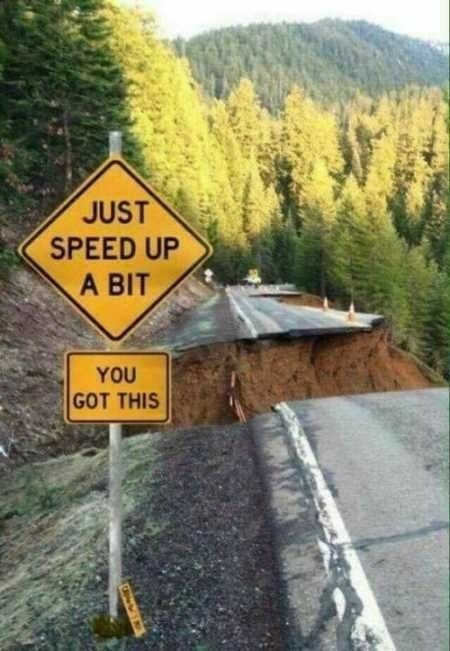 When Barry gave us the First Trillion in 2009, every current infrastructure project I saw in SoCal, which is hundreds, all put up the Obama Infrastructure signs as part of his big plan.

The wall is the first infrastructure project that I care to see finished before ANYTHING else.

13 posted on 05/19/2019 7:08:46 PM PDT by jdsteel (Americans are Dreamers too!!!)
[ Post Reply | Private Reply | To 1 | View Replies]
To: Tolerance Sucks Rocks
Lawmakers should also drop the illusion that infrastructure will bring economic stimulus.

When infrastructure spending is seen as a jobs program you start spending on anything no matter how stupid or useless.

The reason for additional infrastructure spending should be to increase safety and unsnarl traffic, not to create jobs. The additional hours spent in transit by commuters and trucks due to daily traffic jams in many areas must cost billions annually in extra fuel consumption - and then there's the value of lost time, which is hard to quantify but may be more costly than the fuel.

This is a short-term bailout to help states cover their skyrocketing public pension and Medicaid debt.

They do. By allowing the Fed Gov to overtax us and then telling the states how to spend twice as much.

So we’ll see the pensioners out there with shovels and jackhammers?

‘States can also follow the Canadian and British trend of including more public-private partnerships.’

Interesting that they are now forced to use code words for toll roads - seems that the term ‘toll road’ doesn’t focus group very well.

Actually what they can do is to ignite a rip-roaring inflation.

This will do two things:

1. It will give the temporary illusion of huge prosperity, and

I agree with the arguments.

Unfortunately I don’t think things will change all that greatly even if all those arguments won and were accepted across the country.

Why? The states themselves have often enough been lousy at setting infrastructure priorities on their own, and not merely because they think they can really on federal funding as often as they do. Their “priorities” on infrastructure become just as political and special interest driven as such decisions do in Washington D.C.

The primary gain from winning the author’s arguments will not in my view be a silver bullet that fixes the infrastructure priorities. It will merely be that the states will not be able to blame Washington D.C. when, as usual, the things that need to get done, on infrastructure, wind up being not the things that actually get done; while more waste will continue to be the main story about insfrastructure spending.