Shocking footage uncovered by the Investigative Project last week shows a skit produced by the Muslim American Society (MAS) in Philadelphia showing children calling for martyrdom as soldiers in the “army of Allah” and threatening to behead their enemies and subject them to “eternal torture” to wrest Jerusalem from Jewish control.

The horrific MAS-Philly children’s skit was posted to their Facebook page and shows a choreographed production as part of the group’s April 17th “Ummah Day” pageant dedicated to supporting jihad to control Palestine. A MAS statement on Friday said the songs and poems the children recited exhorting violence and terrorism were an “unintended mistake” and attributed the incident to a vetting error.

MAS has 42 chapters across the United States. A 1997 FBI file obtained by Judicial Watch identifies MAS as the Muslim Brotherhood in the United States controlled by Hamas sympathizers “known to conduct firearms and other military type training.” A Justice Department filing (p. 58, fn. 13) in a terrorism-related case states that “MAS was founded as the overt arm of the Muslim Brotherhood in America.” A September 2004 Chicago Tribune investigative report revealed that MAS had been founded by Muslim Brotherhood leaders, adopted the group’s strict code for secrecy, and promoted Islamic supremacy.

The article interviewed one former MAS member who explained the group’s vision for Islamic rule in America: “It would convert Americans to Islam and elect like-minded Muslims to political office.” Even more shocking is that freshman Rep. Ilhan Omar (D–MN), of other recent controversies, has openly supported MAS...

Of course she does, she supports freedom of religion for her religion only.

Rep. Ilhan Omar and those who voted for her should be regarded as suspected enemies of the United States of America. 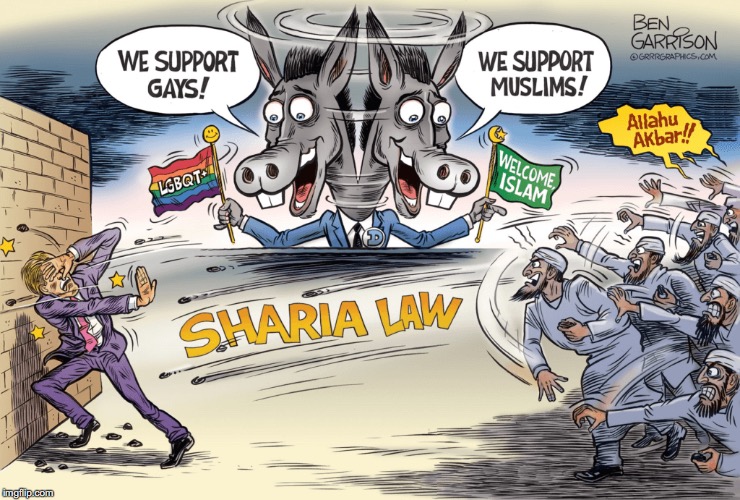 Sounds like our domestic enemies are going to start pimping out a kid with AOC’s “real” message on youtube.comm.

Suspected enemies? It is quite clear...

It is only all B Hussein Obama’s murderous coreligionists,: Death to all who don’t submit to Ialam,

The longer we wait, the harder it’s going to be.

She should serve out her term at Club Gitmo with other enemy combatants.

The MOTHER of all ironies: today they stand together, arm in arm, singing “we too shall overcome”. Some day soon the Muslims will be singing a verse from Van Morrison “ You LIGHT UP a FAG, say life is a drag....”

Suicide for the US.

They call this "religion" the Religion of Terror (i.e., The ROT) for good reason, y'know!

Partner, this piece of work Omar is just like the "America Hating Piece of Work Obama".

The reason we like President Trump is that he will not tolerate any Bravo Sierra from groups or individuals saying he is not doing the job of POTUS. I say a big Bravo Sierra to the DemonRat party and MSM who are constantly criticizing our POTUS.

President Trump always looks to the Constitution of the U.S., period and end of story.

President Trump knows that the Constitution of the U.S. was written by men of God and they were all Christian.

18 posted on 05/07/2019 6:50:33 PM PDT by TheConservativeTejano (God Bless Texas...)
[ Post Reply | Private Reply | To 4 | View Replies]
To: realcleanguy; All
Of course she approves of it. She is a fundamentalist Muslim. This is what is happening in the democrat party

Partner, I could not have said this any better than u just did!

They say a pic paints a thousand words well we have it in your pic.