The author of the anti-Clarence Thomas book Strange Justice appeared on CNN this morning. Introducing her, Alisyn Camerota said, "you say that you shudder to think what will happen" when Christine Ford is questioned at Monday's scheduled Senate hearing.

"I think that the Republicans, despite all the changes that have happened in the generations since those [Clarence Thomas] hearings, are still going to go in with a strategy to save this nomination at all costs. And if that means destroying, destroying Dr. Ford, I hate to even think about it, but I think it's going to be the same kind of political circus that we saw back in 1991. That's what worries me." 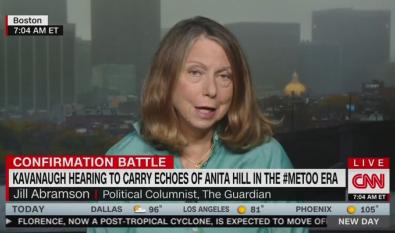 No qualms whatsoever, though, about the trashing of Brett Kavanaugh.

I hope Dr. Ford is utterly destroyed. Make an example of her so that other fools do not follow.

I wonder if she shuddered when the Democrats used Christine to trash Kavanaugh???

Because she knows that the bitch is lying! Nevermind about slandering Judge Kavanaugh!

She is best known as the former executive editor of The New York Times. Abramson held that position from September 2011 to May 2014.

But you dont care about HER sliming a good man over some high school stuff?

That sounds less and less like ‘attempted rape’ and more like HER AT A DRUNKEN PARTY claiming to be groped (which is something that they think, apparently, is so odd for teenage boys)

Where’s that pic of Bluto’s reaction to the flashing of Flounder’s photo on the Delta basement wall?

This from the people who used to scream about “the politics of personal destruction.”

Christine Ford’s is simply too distant and uncorroborated a story to warrant a new hearing or to delay a vote. We’ve heard from all three principals, and there are no other witnesses to call. The only purpose of another public hearing would be a political spectacle in which Democrats could wax indignant for the cameras while Mr. Kavanaugh repeated his denials.

The timing and details of how Ms. Ford came forward, and how her name was coaxed into public view, should also raise red flags about the partisan motives at play. The Post says Ms. Ford contacted the paper via a tip line in July but wanted to remain anonymous. She then brought her story to a Democratic official while still hoping to stay anonymous.

12 posted on 09/18/2018 7:40:58 AM PDT by Liz ( Our side has 8 trillion bullets; the other side doesn't know which bathroom to use.)
[ Post Reply | Private Reply | To 8 | View Replies]
To: governsleastgovernsbest
you say that you shudder to think what will happen" when Christine Ford is questioned at Monday's scheduled Senate hearing.

So, I guess all the questions that implicate her and/or her family and her attorney to:

1. Left wing anti GOP and Trump forums and rallys.
2. Donations to left wing and anti Trump groups.
3. Involved with George Soros.
4. Drill her on the facts of the night in question, which see seems to be surprisingly lax and confused.
5. Drill her on her background, ie has she ever lied to anyone ever before in her lifetime?
6. Drill her on why she didn’t report Judge K by name to anyone 35 years ago or even during her counseling.
7. etc etc etc etc etc

This lady is right, it’s going to be a blood bath, but it will serve notice to anyone else out there, who is thinking of going after Trump with abandonment of the truth.

This is an adversarial situation. Either the accuser or the accused must lose. This is an attempted rape allegation only one of the parties can be believed.

That picture makes me shudder.

I hate these seditious creatures.
Literally.