(CNN) - After almost a full year of Donald Trump's presidency, and with a new year freshly started, I think it's safe to say that we're all exhausted.

I remember thinking after the first few months of 2017 went by, "He can't possibly keep this pace up -- governing by tweet -- it's unsustainable." Clearly, I was wrong.

Just three days before 2018 began, in an impromptu interview with The New York Times, President Donald Trump declared that one of the reasons "I'm going to win another four years is because newspapers, television, all forms of media will tank if I'm not there because without me, their ratings are going down the tubes. Without me, The New York Times will indeed be not the failing New York Times, but the failed New York Times. So they basically have to let me win."

After reading this, I realized that Trump won't relent in 2018 and, to the contrary, will ratchet things up.

Trump's words to the Times indicate that the press will abet him out of self-interest. But in a broader sense, he's banking on the idea that the rest of us -- media, commentators and citizens alike -- can't or won't keep pace with his blusterous attacks and that by the default of complacency, he'll win.

That's why the most meaningful New Year's resolution we can make is to get serious about really participating in the political conversations happening in this country.

Does that mean the media plans to LISTEN to the opposing side?

Or will they just harangue us harder?

That’s OK, and we keep winning

Nobody is trying to pass a law saying you can’t print what you want or say what you want, you jackasses. The people in the left hate when somebody punches back at them like POTUS. They want to say and do whatever the hell they want and nobody’s allowed to defend themselves or come back at them.

Trump complains about the press. Obama spoke openly about shutting down FNC and talk radio.

That’s it they convinced me. Not.

That’s why the most meaningful New Year’s resolution we can make is to get serious about really participating in the political conversations happening in this country.

8 posted on 01/01/2018 8:06:59 PM PST by dowcaet
[ Post Reply | Private Reply | To 1 | View Replies]
To: E. Pluribus Unum
Bardella thinks that when you criticize the press you threaten the first amendment. Never mind even, that Trump is criticizing Fake News. Propaganda.

Honestly that's probably the dumbest idea I've heard from the media in a long time. Without exception. And there are plenty of dumb things that they say.

This seems to be more Very Fake News from CNN.

pre-Trump, Twitter was like the private domain of the FakeNewsMSM - a place where they had almost no followers, but where they could boost each other’s egos by tweeting and re-tweeting each other’s propaganda pieces.

no wonder they hate him.

They have never known anyone like Trump before. GOD I love this President!!

Kurt Bardella is confusing being critical of a corrupt biased MSM with being anti-First Amendment. What a puffed up self 9indulgent fool....

Maybe they could try reporting both sides???

There is no such thing as THE PRESS in the sense that term is used by elitist Progressives today — some sort of elite group whose members are allowed preferential treatment under law. In the Constitutional sense, “the press” is a technological device for disseminating information.

One cannot be a “member” of the press. One can only have access to a press.

Any device which enables one to state and publicize one’s views is a “press,” whether it be moveable type, offset, TV, radio, or the Internet. We all have free access to “the press,” meaning we have the right to pay any provider who wishes to sell us access to publicize our ideas.

In this regard, no CBS anchor has anymore claim to special treatment for being part of “the press” than does any blogger.

“Freedom of the press” applies equally to every citizen seeking to use a technological device to record and publicize his or her opinion.

And they do HATE Him

Or, they could try reporting events that happen. 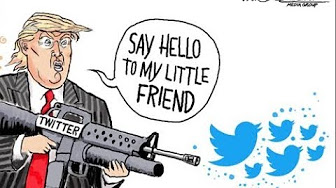 President Trump is actually helping to restore freedom of the Press. You do not have freedom of the press when one viewpoint is allowed to dominate the media and others cannot be heard because of regulation and a conspiracy of ideology.

That is the way it used to be, for about 50 years. President Trump is helping to break that oligopoly, or more correctly, mediacracy.

What the **** did “da press” ever do to deserve the “freedom” they flaunt in our faces? All of the lying bastards need to be in jail for journalistic malpractice.