Senator Schumer wants to argue about tax reform at Thanksgiving dinner. And he has a handy chart for lefties to take along and wave at their more conservative relatives while screeching about the 1 percent. In an article titled, “The Case for Ruining Thanksgiving,” GQ Magazine urges its readers to punish their parents who voted for Trump by staying away, insulting them or ranting about police brutality.

The Scientific American wants readers to push Global Warming over mashed potatoes. The organizers of the Women’s March want you to accuse your uncle of having “white privilege.” Desperate lefties can text Standing Up for Racial Justice at the dinner table and get anti-Trump talking points. “You Should Absolutely Fight About Politics With Your Relatives This Thanksgiving,” Quartz insists.

And then it just gets worse.

"Thanksgiving: The annual genocide whitewash," declares Al Jazeera. "The Thanksgiving Day story represents the violence of colonialism," fumes Bustle. Retelling the story of Thanksgiving, pardoning a turkey and watching football are all "offensive, racist, or just plain problematic". And if Thanksgiving with lefties wasn’t miserable enough, the Village Voice offers 5 politically correct television episodes to inflict on your "terrible aunt or insufferable uncle" who don’t want to admit they voted for Trump.

When Sarah Huckabee Sanders, the White House press secretary, asked the press corps to state what they were grateful for, a collective howl went up from the media. “How Sarah Sanders Humiliated the Press,” wept a CNN editorial. The New Yorker railed against, “The Degrading Ritual of Sarah Huckabee Sanders's Pre-Thanksgiving Briefing.” Asking lefties to be grateful is humiliating and degrading.

Just ask LaVar Ball, who has spent days reveling in his refusal to say, “Thank you.” And the media, which believes that gratitude is humiliating and degrading, has been cheering on his ingratitude.

It’s Thanksgiving 2017. And gratitude has become a partisan issue.

Why is it so hard for the left to be thankful? The answer is as easy as pumpkin pie. The left is a movement built on resentment. And resentment and gratitude are opposing emotions.

That is why the left really hates Thanksgiving.

The revisionist autopsies of American history and the guides to sensitively calling your uncle a racist are about substituting resentment for thankfulness. Whether it’s a family getting together once a year, the Pilgrims and the Indian tribesmen breaking bread or the White House press corps being asked to talk about the good things in their lives, a moment of thankfulness has to be ruined with resentment.

Resentment is the force that gives the left meaning.

The militant lefty is an overgrown brat who never made the emotional transition from the funk of total unfairness that teenagers inhabit to the appreciation for life of the mature adult. Picking a fight at the Thanksgiving table is exactly the sort of thing a teenage brat would do. That’s why there are a dozen guides telling lefties exactly how to pick an unwinnable fight whose only purpose is to ruin a meal.

The family argument isn’t an unfortunate side effect of leftist politics. It’s the whole point.

That is why the best antidote to leftist resentment is conservative thankfulness.

There are plenty of problems in our country and the world. But if we can’t stop to be thankful for the good things, we will sink into the same swamp of resentment as the left.

To be thankful is to be reminded of what we are fighting for. The resentful left doesn’t really fight for anything. Its resentful causes have no end point. There will never be a time when race relations, the environment, social mobility and caloric intakes are good enough for them to hang up their hats. The left maintains a perpetual state of crisis because it justifies a perpetual state of resentment.

The left can’t be thankful because it can’t admit that there’s anything worth appreciating. Revolutionary movements don’t create, they destroy. But we can and should be thankful for what we conserve.

Thankfulness is not just a passive act. It’s a moving and transformative experience that changes us.

Choosing between gratitude and resentment is a fundamental personal and political choice. It defines how we respond to the challenges and blessings of life. And it shapes how we view our country.

Thanksgiving is the tradition of an optimistic and humble people. That is who Americans are.

The War on Thanksgiving is the campaign of a hostile leftist movement that is pessimistic and arrogant. Ruining Thanksgiving is its mission. And it isn’t out to win an argument, but to ruin an America tradition.

If we lose our ability to be thankful for the good things in our lives, we lose everything.

We can win, as Sarah Huckabee Sanders did, by countering resentment with thankfulness. 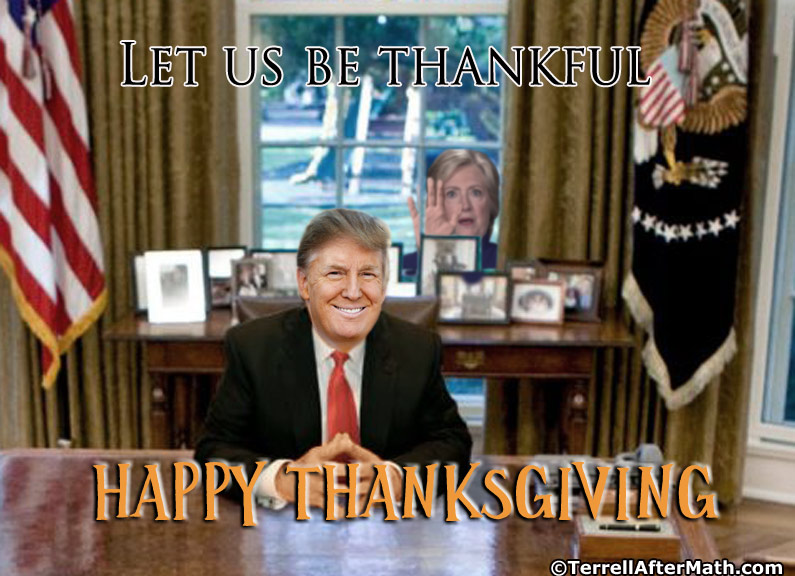 I am thankful that we can still visit FreeRepublic. Life is tougher when this site is down.

I like Greenfield and he nails it again. I’m thankful that no one in my immediate family will pull any of the crap he mentioned.

“Senator Schumer wants to argue about tax reform at Thanksgiving dinner. And he has a handy chart for lefties to take along and wave at their more conservative relatives while screeching about the 1 percent”

And remember that this guy is bought and paid for by companies like Citigroup, JPMorgan Chase, and Goldman Sachs. Can you spell “hypocrite”, big time? I’d send those lefties upstairs with no dinner or dessert, lol.

LIBs/Lefties are such unhappy people. They realize at some level that their ideas are worthless, that they are wasting their lives and that they are on the cusp at all times of being shunned into eternity. I give thanks every day that I am not a LIB/lefty.

I’m thankful that G-d in heaven saw fit to allow me, a sinner and imperfect man, to find the most wonderful women in the world to spend my whole life with.

As for me, I have come to despise thanksgiving day because it’s become an exercise in being driven insane.

I’m all for the real meaning of T-day, please don’t misunderstand.

I’m thankful that G-d in heaven saw fit to allow me, a sinner and imperfect man, to find the most wonderful women in the world to spend my whole life with.

“Senator Schumer wants to argue about tax reform at Thanksgiving dinner. And he has a handy chart for lefties to take along and wave at their more conservative relatives while screeching about the 1 percent”

And remember that this guy is bought and paid for by companies like Citigroup, JPMorgan Chase, and Goldman Sachs. Can you spell “hypocrite”, big time? I’d send those lefties upstairs with no dinner or dessert, lol.”

We don’t invite lefties to dinner or into our home. I started this when I turned 50, and I’m rapidly approaching 80!

Life is too short to knowingly allow liberals to insult you in your home.

In short, Leftists are misanthropes.

Our leftie relatives get a full blown battle out of me if they try this crap. Also I insist that a prayer be said before the meal. That means we don’t do Thanksgiving together anymore.

I don’t miss them and Thanksgiving is celebrated in peace.

Left and right is a flowery description of the spiritual war in which we are engaged; most unwittingly.

What miserable lives these lefties must have - seeking out “injustice”
and “racism” where none exists (they can move to Cuba).

Imagine spending your life dedicated to making others miserable.

What an ungrateful, unhappy lot they are - egged on by the likes of GQ and Planned Parenthood to sow dissention and misery.

Schumer, that, may cause you to be considered AS the Thanksgiving Turkey, to BE CARVED UP.