Are recruiters, particularly in the Army and Marines, lying to (or at least misleading) young women who they try to recruit into military service? That’s a question which is asked and answered in the LA Times this week by two people who should know. Julie Pulley is a former West Point graduate Army captain and Afghanistan veteran. Rear Adm. Hugh P. Scott was a Navy medical officer and is an expert in medical physical standards. They discuss the current push to drive up the number of women going into combat roles and the unique stresses which the demands of those duties put on the bodies of women. The difference between the genders in this scenario is significant and worrisome.

The first example is based on nothing more than the fact that men produce a lot of testosterone, leading to larger hearts and more muscle mass.

M]ales have 40% greater aerobic capacity, and higher endurance compared with females. Women’s smaller hearts require more blood to be pumped each minute at a given level of exertion because they have less hemoglobin in their blood to carry oxygen.

These differences will put women at a distinct disadvantage in newly opened infantry jobs, where they will be expected to carry 100-pound packs routinely, or in armor jobs, where they will have to load 35-pound rounds again and again. If you don’t like the rather basic argument of “guys are just stronger” you might want to consider that the different body designs between the genders. These leave women open to more injuries and long term health problems if they have to endure that much physical stress over long periods of time.

Many of the consequences of taking on additional combat roles won’t be obvious until years later. Just ask Marine Capt. Katie Petronio, who wrote in the Marine Corps Gazette of muscle atrophy, endurance problems, weight loss and infertility she considers the results of two combat deployments. Women have proved themselves in combat, Petronio said, but in the most physically demanding roles, can they endure “and are we willing to accept the attrition and medical issues that go along with integration?” There are more risks, such as bone marrow loss among women who take common hormone treatments to avoid menstruation while deployed. All of the wear and tear which does a number on the men to begin with is multiplied in women over long periods of time. The reason? I know that the SJW crowd absolutely despises hearing this, but as these expert author reaffirm for us yet again… “men and women are not the same.” Those difference are wonderful in so many ways and are woven into the fabric of human society around the globe, but they also put women at a severe disadvantage in certain high stress, physically demanding activities over the long run.

But even as the military pushes to drive up their enlistment numbers for women, actively recruiting female athletes out of high school and college, nobody at the recruiting stations are issuing them warnings about this. That’s despite the fact that the Pentagon has published studies examining these gender differences and the likely medical complications.

By way of full disclosure, I’m one of those old dinosaurs who doesn’t want women in combat to begin with and I’ve made no secret of that here in the past. But if we are going to have to go down this road (and it looks too late to turn back now) we should at least be honest with the young women who volunteer for this dangerous duty. If the training and rigors of deployment are posing a particular medical threat to them they should be going into it with their eyes open.

They enter service wounded already and take about a week to stop the bleeding.

If they are wounded again in battle, how will their original wound affect their ability to perform...?

Wow, who would have ever thought that man and women are different physically?

Would future enemies treat captured American civilian women different knowing that they could eventually face them on the battlefield?

4 posted on 07/27/2017 7:29:55 PM PDT by blueunicorn6 ("A crack shot and a good dancer")
[ Post Reply | Private Reply | To 1 | View Replies]
To: NKP_Vet
Which is fine - but the real risk of having young women serving with the young men in the service is distraction: the distraction of attraction, the distraction of sexual relationships (in which the primary loyalty goes to your partner(s) and not the unit), and the distraction of those left out of the relationships who will harbor resentment. Unlike civilian workplace couplings, the ones who don't have a partner will be less likely to risk their lives for the winners in this little hothouse of relationships and they are all armed with a rifle.

Combat units must be focused on the mission and their individual part in it. Combat troops have to know going in that their primary job is killing the enemy while keeping the soldier/Marine to his right and left alive, if possible. Combat troops will only function successfully if they are sure that everyone shares the risks equally and that there is no bias in critical decisions.

Distractions get people killed and are not worth marginal worth of making interest groups happy.

No. The odds of them encountering the same woman on a battlefield are so miniscule as to be non-existent.

>>M]ales have 40% greater aerobic capacity, and higher endurance compared with females. Women’s smaller hearts require more blood to be pumped each minute at a given level of exertion because they have less hemoglobin in their blood to carry oxygen.

These differences will put women at a distinct disadvantage in newly opened infantry jobs,<<

We just have to tell our enemies not to be so damned sexist in how they fight us.

They certainly do. But you can't make an omelet without breaking a few eggs!

Does that mean they must integrate low power rounds into their machine gun ammunition belt?

During WWII, the Soviets thought women combat soldiers were a good idea.

That lasted about two weeks.

What? You mean there really are differences between men and women’s bodies? Who knew?

But they can serve honorably and ably in other roles.

Here is a woman that served very honorably and rose to Admiral...This brilliant woman was wonderful!!!! A true role-model for young women who yearn to serve this great nation.

She created the first high-level language compiler..COBOL. It was an amazing feat..she had the RIGHT STUFF! 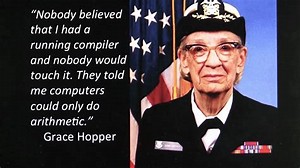 Maybe, just maybe, we as a society can have a discussion, about how the military is different in many ways from civilian life.

Which would mean, among other things, that laws and policies in civilian life to ensure equal opportunity for women, are not always appropriate in the military.

Liberals are caterwauling about Trump’s ban on transgenders in the military. They do so from what I think is a false premise, that the military should conform to how civilian life treats such people.

WE should have the meanest toughest fighting force needed to defend our country. And if that means transsexuals or women or other groups can’t serve or can’t serve in certain positions, tough blank. Go bitch about it on MSNBC. The military is not the civilian world.

Your post reminds me, of how girls on navy ships have become pregnant. I think we all know what has to happen for a pregnancy to occur. Which begs many questions about the military and the missions, and the wisdom of mixing the sexes together.

Here is a beautiful Russian sniper from WW2. she has a Mosin Nagant rifle with original scope.. A dear friend of mine gave me one of these rifles...wish I had an original scope for it :-/

That’s a bit different than serving on the front lines with other troops.

Is anyone really named Jazz?

Try forty-two days in the bush. A shower was clean fatigues every third resupply, maybe.

Everyone came off of that with rashes, boils and other skin problems. Get dusted off for a boil? Not likely.

I can’t imagine a woman physically standing up to that wear and tear.

But every war is different and maybe these sorts of conditions won’t be encountered in the future.

Your thinking in these matters is, IMO, flawless!

I have absolutely no problem with women or trans people serving...just not in certain roles.

The military is, as Rush says, “To kill people and break things” Anything that makes them less effective in that role is to be AVOIDED!

It is VERY different, it requires no great physical strength and that makes it a good fit for a few very brave women.

That said, I DO NOT want women to be snipers in the US military...it was done in WW2 out of necessity... I wish those women did not have to go through that :-(