Lucy Languishes as a Human-Ape Link

Human evolution has consistently been shown to be without scientific or biblical merit. Although a parade of supposed transitions are displayed in every conceivable outlet, non-Darwinists maintain that the links between people and our alleged ape-like ancestors are—missing. 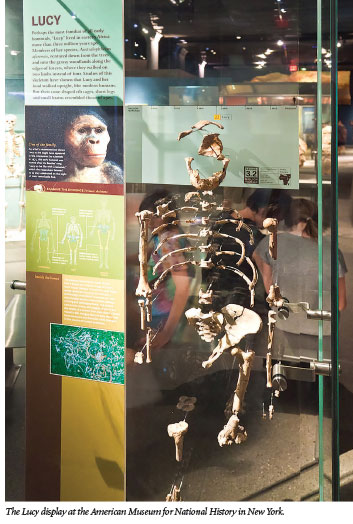 From the article footnotes:

"Evolutionary anthropologist Peter Dodson states in a video display in the Perot Museum in Dallas, “I have to tell you that imagination is a very, very important trait for paleontologists.”" 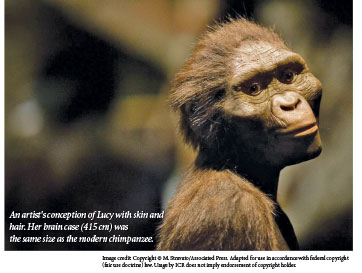 Imagination is very important for climate scientists, too.

Science, meet Art. I hope you’ll enjoy your life together. And don’t forget your artistic license.

Christ they can’t even get their terminology right, keep trying to prove Lucy was an ape. She was, and so are we. I hate those people.

Uncharted Territory
While evidence that core duplicons are a driving force behind human evolution is growing, many questions remain. For example, it’s unclear what triggered the creation of these cores or how they spread. One popular theory points to a class of viruses known as retroviruses, which can insert DNA into their host’s genome that is then passed from generation to generation. Perhaps a retrovirus was responsible for the initial core duplicons. A significant portion of our genome is known to arise from viruses that have left the imprint of their DNA but are no longer active in our cells. “My favorite hypothesis is that at a key point in great ape evolution, there was a burst in retroviral activity,” said Edward Hollox, a geneticist at the University of Leicester, in Great Britain.

Some creationists (those that seek to discredit Darwinian evolution), engage in what the other side disdainfully calls the “god of the gaps”.

No matter how many gaps in the evolutionary record are filled, for every gap that is filled, two gaps are created. It is the nature of the fossil record.

Find a fossil that has feathers and reptilian features? Now there are gaps on both sides of that fossil! Two more “gaps” for every “gap” filled!

It is a stupid and foolish argument.

Numerous intermediary forms have been found.

That is how evidence for scientific theory builds up.

Arm length to leg length ratio was between the great apes and humans.

She obviously walked upright, unlike any other great ape.

marktwain: ** “ Find a fossil that has feathers and reptilian features?
Now there are gaps on both sides of that fossil!
Two more “gaps” for every “gap” filled!
It is a stupid and foolish argument. “ **

I’ve seen that argument made on Free Republic, but not recently, some years ago I’d say.
Reminds me of the ancient Greek paradox wherein Achilles can never catch the rabbit even though his speed reduces the distance by half every minute.
Mathematically yes, but practically something else.

** “ Human evolution has consistently been shown to be without scientific or biblical merit.” **

Only in the minds of people whose religious beliefs prevent them from accepting evidence for the scientific theory.

** “Although a parade of supposed transitions are displayed in every conceivable outlet, non-Darwinists maintain that the links between people and our alleged ape-like ancestors are—missing.” **

But regardless of how many transitional forms are found, anti-evolutionists will still claim “no transitions”.
That may sound foolish, but actually is one reason evolution is still in large part classified as scientific theory, not fact.

It is a fallacy to claim fossils as evidence for evolution, for the simple reason that no genetic information can be obtained from fossils. Ultimately, fossils are merely petrified skeletons, and some of them (like Lucy) aren’t even complete. Everything we think we know about fossilized animals comes from the imaginations of paleontologists.

She has some ‘splainin’ to do.

We know roughly how old the Earth is. According to the Bible, it’s about 6,500 years old, maybe a bit less. Evolution would have to take billions of years. So, clearly, evolution is a crazy theory that cannot possibly be true.

I hate that any tax dollars are spent to study topics like the origin of mankind or how the universe came into existence. We know that stuff already. GOD TOLD US!