It seems as though everyone has an opinion on what the Egyptians should do with their country and government. Iran wants the Muslim Brotherhood restored to power; Russia is worried about civil war; most of the West wants new elections and an end to military rule. The US is currently debating on whether to call the coup a coup at all, as that designation would force a suspension of American aid to the Egyptian military. The Obama administration demanded the restoration of “a democratically elected civilian government” rather than “the democratically elected civilian government,” a nuance that was not lost on CNN. A bipartisan statement from the House Foreign Affairs Committee on Friday used less nuance and implicitly endorsed the coup:

The Republican chairman of the House Foreign Affairs Committee and its ranking Democrat have released a joint statement suggesting support for the Egyptian military’s July 3 coup against President Mohamed Morsi.

The statement, by Reps. Ed Royce (R-Calif.) and Eliot Engel (D-N.Y.), argues that Morsi and the Muslim Brotherhood had not pursued “real democracy.” It also urges the military to “exercise extreme caution” in moving forward and to “support sound democratic institutions” as it does so. The House Foreign Affairs Committee could play an important role in determining how Congress guides or pressures the Obama administration’s response to events in Egypt — which may itself be a key factor in how the coup-backed government behaves. …

The decision by the Egyptian military to take state authority out of the hands of the ruling Muslim Brotherhood government marks another sharp turning point in Egypt’s incomplete revolution. What the Brotherhood neglected to understand is that democracy means more than simply holding elections. Real democracy requires inclusiveness, compromise, respect for human and minority rights, and a commitment to the rule of law. Morsi and his inner circle did not embrace any of these principles and instead chose to consolidate power and rule by fiat. As a result the Egyptian people and their economy suffered greatly.

It is now up to the Egyptian military to demonstrate that the new transitional government can and will govern in a transparent manner and work to return the country to democratic rule. We are encouraged that a broad cross-section of Egyptians will gather to rewrite the constitution. All parties in Egypt must show restraint, prevent violence, and prepare to be productive players in the future democratic Egypt. We encourage the military to exercise extreme caution moving forward and support sound democratic institutions through which the people and future governments can flourish.

One key player, though, is keeping very quiet about the affairs in Egypt. Israel has mostly refused comment on the turmoil within its Suez partner, attempting to stay as far out of the mix as possible:

Benjamin Netanyahu only went so far as reminding Israelis that the security fence they built to control illegal immigration and smuggling from the Sinai certainly is a handy asset at the moment, considering the circumstances:

Israel’s new security fence along the Israel-Egypt border has stemmed the tide of illegal immigration to Israel and has been protecting Israel from terrorists operating in the Sinai Peninsula, Prime Minister Benjamin Netanyahu said Sunday.

“The fence that we built is making a significant contribution to blocking illegal migration to Israel,” Netanyahu said ahead of the weekly cabinet meeting, noting that the fence has blocked 99 percent of African migrants from reaching Israel. …

Every day that passes “underscores how correct and how important the decision was to build the fence in the south,” the prime minister said. “You must remember that this fence is equipped with very advanced means… to protect the State of Israel against the double threat of illegal migration and terrorism from Sinai.”

Israel got another reminder of the barrier’s value this morning:

Armed men attacked four security checkpoints on Sunday in the North Sinai town of Sheikh Zuweid, close to Egypt’s border with Israel and the Gaza Strip, part of an upsurge of violence there since Wednesday’s overthrow of Islamist President Mohamed Mursi.

Gunmen in pickup trucks exchanged gunfire with soldiers and police in the lawless province in the early hours of the morning, but there were no casualties, security sources said.

According to the group launching the attacks, they have turned their attention from Israel to Egypt’s security forces:

On Sunday, the Salafi Jihadi group, one of the biggest Sinai-based Islamist militant groups, issued a statement on a jihadist website saying that “current events ravaging the country” were affecting Sinai.

It also threatened attacks on the “repressive practices” of the police and military forces on people in Sinai.

The group has issued statements threatening attacks on Israel previously, but this was the first known direct threat they have issued against Egyptian security forces.

Yes, that fence is coming in mighty handy. And that will probably be the closest Israel comes to a public comment on the unrest next door. 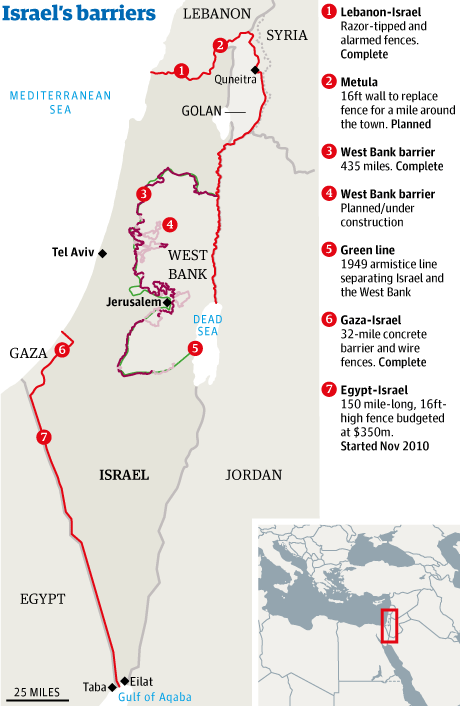 I bet a fence like that on our Southern boarder would be effective.

We all know that the fence doesn’t work, all it takes to defeat a 20’ fence is a 21’ ladder, besides it’s too expensive, this is just right-wing propaganda attempting to make government look bad for not protecting our borders.

So why don’t the Palestinians make the 21’ ladder?

They have a crack team on The Ladder Project, and once they get an Israeli 21’ ladder to copy they are confident they will be able to construct a reasonable facsimile.


You answered your own question when you introduced the word "Palestinians" ...

I use to patrol fence like that in Jordan valley about thirty years ago. Was effective indeed. Mine field was even better. :-)

“The US is currently debating on whether to call the coup a coup at all, as that designation would force a suspension of American aid to the Egyptian military. “

Why bother when our muslim-in-chief can simply write an executive order and do anything he wishes without fear of consequences?

A fence, what a novel idea.

Because the Israelis understand the principle that barriers which are not combined with observations and direct fire are only an annoyance to the enemy. In other words, putting a ladder up against an Israeli fence gets you shot by an Israeli sniper.

One needs a 21ft ladder on both sides, or one ladder and a large bouncy toy on top of a VW van.

If fences don’t work, then should all fences around prisons be taken down immediately to save money?

should all fences around prisons be taken down immediately to save money?

If I was a democrat I’d say yes, because it’s obvious
that the fences are not keeping people out of prison.

The Israeli government built a fence because they actually care about Israelis.

Maybe they could build one for us?

Border fences ar eonly for governments without a death wish.

19 posted on 07/07/2013 5:37:25 PM PDT by Blood of Tyrants (Inside every liberal and WOD defender is a totalitarian screaming to get out.)
[ Post Reply | Private Reply | To 2 | View Replies]
To: Darteaus94025
If fences don’t work, then should all fences around prisons be taken down immediately to save money?

Last I knew there is still a fence around the WH.