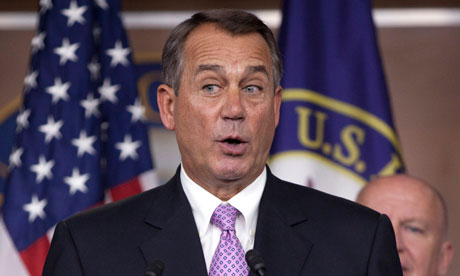 House speaker John Boehner is set to sign an offer from Obama to accelerate negotiations.

Republicans in the House of Representatives have capitulated in the showdown over the payroll tax, handing Barack Obama an important victory going into election year.

Under pressure from other senior Republicans for blocking a bill that would extend tax cuts to millions of Americans, the House speaker, John Boehner, is backing away from his insistence that any deal must cover a full year.

A deal agreed by Republicans and Democrats in the Senate on Saturday covers two months, to allow further negotiations in January. It appears that Boehner will sign up to an offer from Obama to accelerate these negotiations.

The deal means that, after a year of humiliation at the hands of congressional Republicans who have repeatedly threatened to close down the federal government, Obama is close to a much-needed victory.

The decisive moment came when ther Republican leader in the Senate, Mitch McConnell, after days of silence, lined up behind Barack Obama and the Democrats.

Boehner was blocking passage of a bill that would extend tax breaks to 160 million Americans, a measure introduced by Obama last year to help stimulate the US economy. If the bill is not passed by 31 December, American taxpayers face cuts in their pay of an average of $40 every two weeks. About 1.3 million people stand to lose unemployment benefit.

Hey Boner. Is that a new Ferrari in your driveway ???

Why do the idiot Republicans ALWAYS allow the Democrats to get them into a “do this and you lose, or do THAT and you also lose, ha ha!” situation? WHY?!!

3 posted on 12/22/2011 2:36:06 PM PST by Pravious
[ Post Reply | Private Reply | To 1 | View Replies]
To: MinorityRepublican
Boehner statement: "We will ask the House and Senate to approve this agreement by unanimous consent before Christmas. "

Anybody know ONE patriotic person in the House or Senate?

I suspect the House is going to link FICA changes to deductibility of certain business expenses ~ to wit, pay for illegal aliens.

BTW, that's not an original idea of mine ~ picked it up from some other sites discussing tax policy and it made a lot of sense. (This goes back a couple of years ago before we owned the House too).

I’m done! So done with the GOP, politics, I’ve had enough!

Hey, everybody! Let’s all send lots of money to the RNC to support this guy!

Republicans cave in to Obama


WOW that’s something you don’t see everyday/sarc
Its a shame that its scarce to find a Republican with a SPINE these days..all they constantly do is bend over for the Dems

Hey, Obama can go to Hawaii now and keep spending lots of money.

“Bath-House” Barry really MUST be satan...
or, the repubics really ARE p*ssies.

Not exactly an Obama triumph, if that's the case.

The House GOP always had a great weapon which they never used...

Knowing the Weaper of the House like we do, that was a no brainer!

17 posted on 12/22/2011 2:42:24 PM PST by Conservative Vermont Vet (l)
[ Post Reply | Private Reply | To 1 | View Replies]
To: MinorityRepublican
the front top page story of our local rag featured a poor, poor me article about how people are really going to have to cut back because you know, that whole $20 for the average family is life and death....

the media in this country is just crooked and rotten....

“Senator Reid and I have reached an agreement that will ensure taxes do not increase for working families on January 1 while ensuring that a complex new reporting burden is not unintentionally imposed on small business job creators. Under the terms of our agreement, a new bill will be approved by the House that reflects the bipartisan agreement in the Senate along with new language that allows job creators to process and withhold payroll taxation under the same accounting structure that is currently in place. The Senate will join the House in immediately appointing conferees, with instructions to reach agreement in the weeks ahead on a full-year payroll tax extension. We will ask the House and Senate to approve this agreement by unanimous consent before Christmas. I thank our Members – particularly those who have remained here in the Capitol with the holidays approaching – for their efforts to enact a full-year extension of the payroll tax cut for working families.”

Heck, I’m going to email my Rep and ask him to object to the “unanimous consent”!
I don’t expect he will but just voting against this won’t work and I’m letting him know it’s a mark against him.

We need get through this cycle, and with prayers get what we need to at least stop the bastards currently manning the helm from dashing us on the rocks, and then get busy developing a political party consisting of citizens concerned with real American values.

We haven’t anyplace to turn to but ourselves. We have to retake our government from the self interests, the radicals, the Leftist political whores, the Unions, the sludge the Democrats have pumped into the carburetor of our governing engine.

We have no choice.