Gun owner registration … bans on semi-automatic firearms … adoption of a UN gun control treaty -- all of these issues could very well be decided over the next 24 hours.

Both houses of Congress will be voting on a debt ceiling bill that establishes a legislative committee with TREMENDOUS powers. Fox News is calling this committee a SUPER CONGRESS, because its legislative proposals (which could include gun control provisions) CANNOT be filibustered or amended in the Senate or House.

To understand what a huge deal this is, consider that House Speaker John Boehner is able to keep a mountain of gun control bills from coming to the floor of the House. That’s the power of the Speaker.

And in the Senate, we have been able to kill much of the gun control agenda by filibustering legislation (that is, requiring the Majority Leader to get a supermajority or 60 votes in order to pass gun control).

The most recent example of this occurred earlier this year when we defeated a radical, anti-gun judicial nomination (Goodwin Liu) using the filibuster. The filibuster has been our saving grace in the Senate, but that could be tossed within the next 24 hours.

Regarding the debt ceiling compromise, here’s what one legislative analyst (inside a Republican office on Capitol Hill) had to say:

Right now, we have limited protection from the schemes of the left – even if they have some Republican support, we have a speaker who wouldn’t bring horrible bills to the floor, and we have the Senate filibuster.

Both of these are rendered moot by the Super committee. There is NO Senate filibuster on the product they report. The Speaker CANNOT stop a vote in the House….

A super highway for gun control legislation? This is incredibly unconstitutional! We don’t elect a Congress, which can then turn around and elect a SUPER committee. We need to make sure this never lands on the President’s desk.

ACTION: Please email and call your Representative and Senators. Urge them to vote NO on establishing this SUPER CONGRESS with unconstitutional powers.

TOPICS: Constitution/Conservatism; Crime/Corruption; Government; News/Current Events
KEYWORDS: banglist; congress; constitution; cw2; gungrabbers; guns; rkba; supercongress; thisisit Navigation: use the links below to view more comments.
first 1-20, 21-40, 41-57 next last
The time is fast approaching, patriots, when you must decide whether to stand and deliver or cower and wither under the oppressive fascism of the US government. When is enough finally enough? Will you let the feds cross yet another line in the sand?
1 posted on 08/02/2011 10:10:41 AM PDT by ronnyquest
[ Post Reply | Private Reply | View Replies]
To: ronnyquest

You want them,come and get them. 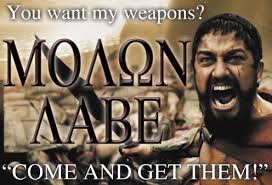 When I know I have taken out at least 10 of these a$$holes to me I will rest easy in my grave .

Drawn too many lines in the sand already.

Let’s get ready to rumble!

Didn’t know the super congress had this power.

Though I am not surprised. The plans were for a North American Union a decade agao, and this will speed things along.

7 posted on 08/02/2011 10:20:47 AM PDT by redgolum ("God is dead" -- Nietzsche. "Nietzsche is dead" -- God.)
[ Post Reply | Private Reply | To 1 | View Replies]
To: ronnyquest
I've got news for these a**hats, the so called "Super Congress" can't do anything unless the rest of the legislature(both houses)votes on it. They can suggest things, just as any other member of the legislature can do but the deciding factor are the votes of the whole legislature.

This BS of acting as if this stupid committee has some degree of power more than the whole body is just that: BS. As for calling them the "Super Congress" I strongly object to that.

This whole debt-ceiling debate was a smoke-screen. The goal the whole time was ramming through this dictatorial SuperCONgress.

The military have more weapons than Kongress. Right now they are not on Kongress’ side after that deal to gut the military finances. So Kongress..try and get em’ We’ll call in the Marines.

“The beauty of the Second Amendment is that it will not be needed until they try to take it.” Thomas Jefferson

I don’t have any guns! Boating accident!

Hmmmm.
I just re-read my copy of the United States Constitution.

I see nothing in there about anything like a, “Super Congress.”

I DO, however, see something about a, “Second Amendment....”

Go right ahead, start the next phase of this damn Civil War.

I seriously don’t believe that our country is going to survive until 2012.

1. No the debt committee, or "super congress" if you prefer, can't unilaterally approve treaties, they still require a 2/3 majority per the constitution.

2. No the debt committee can't impose gun control, and, (there is some debate on this point), probably can't even introduce anything that is not budget related (Cantor says they can't even propose tax increase only spending cuts).

3.Even under a worst case scenario, that the committee did insert gun control into some debt bill, it would still require a majority vote in the house and senate.

4. No the Republican majority in the house are not going to throw away their political careers by voting for gun control.

5. No the Republicans won't be "held hostage" by the threat of debt triggers and forced to support gun control. The triggers don't go into effect until 2013 even if activated, giving republicans plenty of time to reverse the defense spending cuts in other must pass legislation. Cantor has already said the Republicans in the house would allow the triggers before voting for a tax increase if the debt committee included one. The triggers are essentially toothless political theater.

6. And finally, No the "super congress" is not an all powerful entity that is going to dominate congress from now on, for one thing it's mandate expires at the end of every congress and has to be renewed by the next on, because no future congress can be bound by the actions of a current one. For another, it only has a much power as the House and Senate decide it has, in fact, constitutionally the House and Senate leaders could simply ignore it with impunity, because the only recourse would be to get the courts involved and they aren't going to touch an internal congressional dispute with a ten foot pole.

>> I think this story was pretty thoroughly debunked yesterday <<

Oh, c’mon. Don’t be a spoil sport. Conspiracy theories are a lot of FUN!

Political leaders be advised, the people are passed the pissed off stage.