Returning to the airwaves this morning after a seven-month exile, Don Imus seemed intent on demonstrating two things. First, that he was unequivocally contrite concerning the comments he had made about the Rutgers University women's basketball players that resulted in his firing. Second, his contrition notwithstanding, he wasn't going to change his irreverent ways when it came to the country's political leaders.

To prove his iconoclastic bona fides, Imus concluded his monologue by observing "Dick Cheney is still a war criminal, and Hillary Clinton is still Satan."

Listen to audio here [with apologies for the mediocre sound quality.]

But before ending on that defiant note, he took several minutes to describe his meeting with the women of the Rutgers team, and the way the entire experience had changed him. 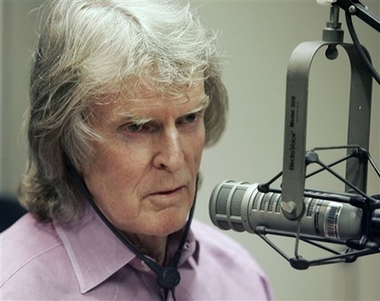 Any suggestions as to who else is out there to listen to from 6am-9am in the NYC area or on the internet. I tried to listen to this schmuck for 5 minutes and I cant get through it.

From today on, Imus will be replaced with Ipod.

Who is Don Imus, and why does anyone care what he thinks?

6 posted on 12/03/2007 4:46:49 AM PST by norwaypinesavage (Planting trees to offset carbon emissions is like drinking water to offset rising ocean levels)
[ Post Reply | Private Reply | To 1 | View Replies]
To: samtheman

Maybe they will let him do the women’s NCAA basketball championships this year from Rutgers.

I guess that's "fair and balanced". I am glad he's back, he's always entertaining even though I rarely agree with him. His return has to piss-off hilary and sharpton which is good enough for me

It has been my Kubie backup for years.

CBS, News Radio 88...more hard news and less political spin than most, although the spin IS there.

I don't give a flip what he thinks about any subject.

I listen to WABC in the morning very often doing house work. I will not listen to attacks on the President or Vice President Cheney. I have this http://www.prizes1.com/images/WDC-BOB-58819-lDickChaney.gif
right on a shelf in the living room mr. imus.

Don’t know if he is on a station you can hear but Bill Bennett starts at 6 am.

Howard Stern on Sirius.
Imus always has been absolutely unlistenable. Between the mumbling speech pattern and the incoherent thought process, it’s just horrid.

He had uber liberal (and plagerist) Doris Kearns Goodwin on. The arrogance of that woman forced me to abandon my curiosity and go back to sleep.

If you have XM, tune to #158, Quinn and Rose in the morning. You may be able to get them over the air, depending where you are. Certainly much preferable to Imus.
http://www.warroom.com