On July 23, 1967, Black Panthers and assorted other Black extremists (with White hippies and far-leftists backing and encouraging them) eventually wrote their political epitaphs with it (though their movement unfortunately died a long, slow death--far past its time, if there ever was a time). But they robbed and killed Detroit--and a significant portion of Black America with it. 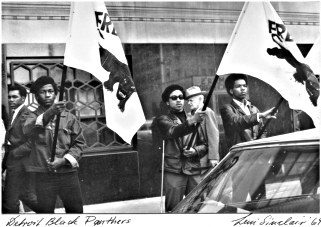 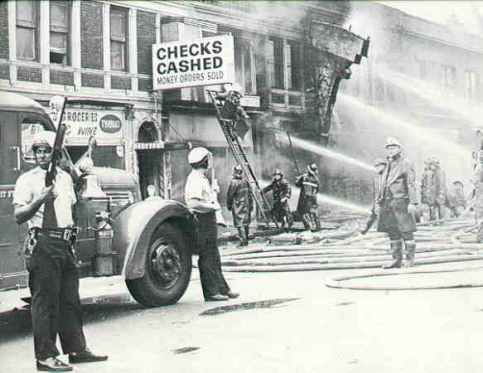 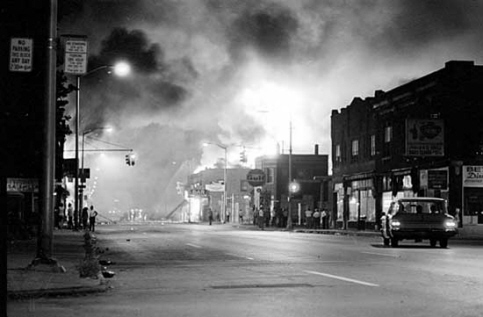 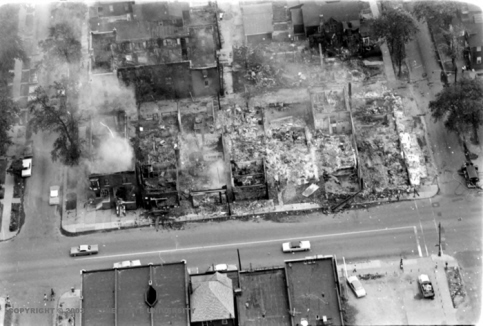 Today, they have all those things. And they have nothing. They won the riots, they lost the war.

As my Dad says, when the riots began, Gentile, White Detroiters ran out to buy bullets. Jews ran out to buy guns (way too late). But eventually, they all ran out--and away--from Detroit. Today, more than nine out of ten Detroiters are Black. And even Blacks are leaving the Detroit morass faster than Roger Bannister. The city is losing population by the tens of thousands, every year. Black Americans, like White Americans, don't want to live in the crime, failed schools, and other living conditions brought to you by the Detroit riots. Crime under Detroit's Black police chiefs (the city has had several) is at an all-time high, and Detroit Public Schools, under its Black superintendents and school boards (there have been several of those, too), are at their worst, with record high drop-out rates and numbers of illiterate graduates.

When Black radicals started the riots, they achieved their goal of driving out White Detroiters, but their separatism only isolated them. Unlike every other inner city in America, Detroit is not a tourist destination. It's not a place where suburbanites generally clamor to go to nightclubs and restaurants. It's simply too dangerous.

The violence and destruction of the riots never really went away, just the press coverage of it. Such prominent figures as the son of former Detroit Mayor Dennis Archer and the daughter of Detroit Tigers/Red Wings owner Mike Ilitch have been mugged.

During the Superbowl, with thousands of FBI and Homeland Security agents roaming around, there were two murders in the vicinity of the temporary bars and restaurants dotting the main drag of Woodward Avenue. I say "temporary" because that's what they were. Despite all the moving around of cranes to make it look like something--anything!--positive was going on in the city, Detroit Superbowl Committee personnel had to lease out shops, restaurants, and bars on 7-day leases. Any more than that, and they couldn't convince anyone to do business on the normally abandoned streets.

Crime is rampant, the city can't attract a major business, and the banana republicans on the city council junta are busy passing resolutions to name a tunnel after John Conyers, declaring Dubai a sister city of Detroit, and maintaining Sanctuary City status for illegal aliens. Monica Conyers (wife of the radical Congressman) is symbolic of the city council. Drunk and in fist fights at bars, she's a mess. And so is her legislative body and the city it governs.

With a pimp daddy mayor, Kwame Kilpatrick, who dresses like a Gangsta and is involved in scandal after scandal, the city is the laughing stock. But, hey, the Mayor made an appearance on "Living Large," a now-cancelled national hip-hop show. Thank you very little. Kilpatrick, whom I like to call Kwame the Kingpin, was suspected in the drivebuy shooting of "Strawberry," a stripper who allegedly performed in the Mayoral Manoogian Mansion for "His Honor." He used his 21-bodyguard posse of police officers to serve as his personal harem-recruiter and to ferret him to and from different girlfriends.

These are the people who betrayed Blacks in Detroit, not the Whites who took White flight (followed by Black flight) from the city and gave them free reign to "run" the city . . . and fail magnificently. And, yet, they still blame even this on the White man.

Is it any surprise with "leadership" like this that the city is a ruin much used by Director Michael Bay as a set for movies. With the city a ghost town, even at lunchtime, he has a cornucopia of empty, decrepit, vandalized buildings--once grand palaces of business and industry--to choose from. And he doesn't have to deal with much traffic--by foot or car--interrupting his shoots.

Instead, Detroit is a burnt out shell. It is the only inner city in America that has not undergone a revival, a gentrification (even Cleveland--the former "Mistake on the Lake" was reborn). While some of that can be attributed to recent, never-ending downturns in the auto industry, this is a phenomenon that has metastasized throughout the city, even when Ford, GM, and Chrysler were at their height. Now, that they, too, are on the unreclaimable decline, it only helps solidiy Detroit's rigor mortis.

Drive down the Lodge Freeway, the main artery from Detroit's Northwest suburbs into the city, and you will see burnt out house after burnt out house dotting the freeway. All of them are in Detroit, and all of them--in their burnt out "splendor"--have sat vacant and ashen for years.

Ten years ago, when I was sworn in to practice before U.S. District Court, my father took me to lunch. We walked down the streets of downtown Detroit on a beautiful spring day, but there was hardly a soul as far as the eye could see. Ten years later, nothing has changed. It's only gotten worse.

Detroit is in the worst condition of any major city in America, except perhaps New Orleans, and that took a hurricane, an act of G-d. Three weeks ago, A&P-owned Farmer Jack--the last national supermarket in Detroit, the last large national retailer in the city--closed its doors and said Sayonara to the environs South of Eight Mile.

This is the legacy of the Detroit riots. And despite all the Detroit newspaper and media hype that those days are over, their legacy has only just begun.

To the last Black Panther leaving Detroit: Don't forget to turn out the lights. And start your usual fires, in their place.

Osama Bin Laden has a better chance of getting elected President than Detroit has of arising from the dead.

As Mark Twain might say, reports of its rebirth have been highly exaggerated.

TOPICS: Crime/Corruption; Culture/Society; Editorial; Government; News/Current Events; Philosophy; US: Michigan
KEYWORDS: aintcominback; americanzimbabwe; blackpanthers; bladerunnerwasteland; bluezone; deadmotown; debbieschlussel; detroit; freefirezone; july231967riots; raceriots; turnthelightsout; urban; urbanwasteland Navigation: use the links below to view more comments.
first 1-20, 21-40, 41-60, 61-80 ... 141-142 next last
Forty years ago, riots erupted in Detroit. Since then, its all been downhill. The city keeps losing population and the area down the Lodge Freeway, you'll see mile after mile after mile of burnt out housing. Just like out of "Blade Runner." Detroit ain't staging a revival any time soon. As Debbie Schlussel said it, "Osama Bin Laden has a better chance of getting elected President than Detroit gas of arising from the dead." Touche!

But we do have the Tigers.

And the Red Wings.

Look on the brite side, they have a large and growing Islamic population.....

6 posted on 07/23/2007 4:29:36 PM PDT by Old Sarge (This tagline in memory of FReeper 68-69TonkinGulfYachtClub)
[ Post Reply | Private Reply | To 1 | View Replies]
To: tet68
Dearbornistan.... even Debbie doesn't live in Detroit. Its just too dangerous. No one wants to live there. The crime, high taxes and corruption have strangled it to death. I don't think its gonna come back.

Reminds me of the flick “Kentucky Fried Movie,” during the Bruce Lee parody, the villain passes judgment on a poor fellow by saying, “Send him to Detroit!” The guy is dragged away screaming.

Just what old Detroit needs!
10 posted on 07/23/2007 4:35:40 PM PDT by Bommer (Global Warming: The only warming phenomena that occurs in the Summer and ends in the Winter!)
[ Post Reply | Private Reply | To 1 | View Replies]
To: goldstategop
Anyone want to see how Detroit has been rotting away. A once great city festers and dies. Depressing stuff.

All my life I heard stories about Detroit when - believe it or not - it was a once-great city of fine auto plants, beautiful Belle Isle, a vibrant Downtown, and, of course, the Hudson's Christmas parade. When my father was dying of cancer, he wanted to go back for "one last look." When he returned, he was so depressed that all he would say was "I wish I'd never gone back. It was better to remember it the way it was."

To: goldstategop
This is a job for a Giuliani-type politician.

The first step for Detroit is obviously addressing crime. Copy what NYC did in the 90s with the broken window theory. All city police officers should be put on administrative leave temporarily and an outside force should be assembled to tackle crime in the short run. The police officers placed on leave would have to go through re-training and background checks to weed out the corrupt or don't-give-a-damn officers.

Next Detroit needs to get rid of its city income & property taxes, and replace them with a .05% sales tax and a land-value tax. This will spur investment into those old abandoned buildings and put people to work. The half-percent sales tax would generate needed revenue to upgrade basic city services.

Once the crime is addressed, people will start visiting again, and the magic of the free market will accelerate growth. Detroit probably won't be where it used to be but it won't be the Snake Plissken-like environment that it is now.

A lot of Canadians tell me that Windsor is getting pulled under by Detroit as well.

“With a pimp daddy mayor, Kwame Kilpatrick, who dresses like a Gangsta and is involved in scandal after scandal, the city is the laughing stock. But, hey, the Mayor made an appearance on “Living Large,” a now-cancelled national hip-hop show. Thank you very little. Kilpatrick, whom I like to call Kwame the Kingpin, was suspected in the drivebuy shooting of “Strawberry,” a stripper who allegedly performed in the Mayoral Manoogian Mansion for “His Honor.” He used his 21-bodyguard posse of police officers to serve as his personal harem-recruiter and to ferret him to and from different girlfriends.”

A rising star in Democratic circles to be sure, at least a House member, maybe a Governor even...

One thing that has always surprised me about places like Detroit is “why” a Libertarian type though process never takes hold, the place sounds like a pit.

Until there is an apology from the rioters, not more excuses, there can not be healing.

The lesson from the riots can be seen in downtown Detroit, in the Fist of Joe Lewis. It may be said it is just a memorial to a boxer, but everyone knows what it really means.