WASHINGTON (AFP) - American Muslims chafe at the US government's hands-off approach to Israeli reprisals and worry about countless relatives and friends trapped by violence in Lebanon.

merican Islamic Congress director Zainab Al-Suwaij, seen here in 2004, had an even more immediate goal, urging the US to actively lobby for an end to violence. "The policy for the US should be stopping the violence, period, and starting to solve the problem through negotiations."(AFP/File/Stephen Jaffe)

US officials say Israel "has the right to defend itself," since its incursion into Gaza three weeks ago and air raids on Lebanon, but President George W. Bush's stance offends Americans who are Muslims or of Arab descent.

Early last week, a coalition of 11 major Muslim organizations publicly called on Bush to forcefully condemn the attacks on Gaza and to designate as "war crimes" the destruction of Palestinian civilian infrastructure.

After the Israeli bombing of Lebanon, the appeals for denouncing Israel have multiplied.

"Once again America's image and interests worldwide are being harmed by one-sided support for Israeli actions," said Ibrahim Hooper, spokesman for CAIR, the Council on American-Islamic Relations, the largest US Muslim rights group.

"We're urging Muslims in America and other people of conscience to contact their elected officials to tell them that we have to have balanced foreign policy for the Middle East, one that is driven by American interests, not Israeli interests."

American Islamic Congress director Zainab Al-Suwaij had an even more immediate goal, urging the US to actively lobby for an end to violence.

"The policy for the US should be stopping the violence, period, and starting to solve the problem through negotiations."

The American Arab Anti-Discrimination Committee announced a rally outside the White House Tuesday to "protest Israeli military action in Lebanon and Gaza."

The committee, founded in 1980 by former US senator of Arab descent James Abourezk, calls itself the largest Arab civil rights group in the United States.

And on Wednesday, leaders of Arab-American communities around the United States plan to meet in Washington to discuss the crisis in the Mideast.

The plight of an estimated 25,000 US citizens in Lebanon, many of whom are dual nationals, has injected a sense of urgency to the gathering.

The Arab American Institute, which says it represents the policy and community interests of US Arab Americans, said 40 percent of the 3.5 million Arab-Americans are of Lebanese descent.

The institute has posted on its website photographs of Arab-American vacationers, children and visitors trapped in Lebanon by the fighting.

"In many cases (there is) no way for them to leave, even if a plan were to be developed, they can't go from one part of the country to the other to get out," said James Zogby, president of the Arab American Institute.

The United States has chartered a cruise ship for evacuations that can carry 750 passengers on each five-hour voyage between Lebanon and Cyprus, beginning Tuesday under protection of a US destroyer.

US helicopters flew 64 Americans from Beirut over the past two days, according to the military, without specifying whether they were embassy personnel, dual nationals or tourists.

Janah El Horr, a 24-year-old Lebanese who has been living in the US for three years, said she had been optimistic about Lebanon's prospects after the end of the country's devastating civil war in 1990.

"We were all happy with how (much) the country was able to achieve -- and in such a short time after the (civil) war and how the Lebanese people always thrive and have the will to overcome their civil war," said Horr, who recently returned from a a visit to her native country.

"It brings chills all over to see what this country is going through, so much destruction and pain and being threatened with a new war," she said.

so thats all i have to say about that.

Another claim of victim status by Mad Moe's filthy vermin.

Maybe Jorge is finally seeing Islam for the cancer it really is...

Ought to be a lesson not to harbor terrorists. 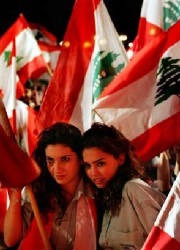 The US and Israel have tried negotiations...they don't work with terrorists. If you want the US to stop the violence we can send a couple of divisions to kill all the terrorists in Lebanon...that'd bring peace...eventually.

And everyone knows it takes sooo much to get them riled up.

I'm sure they were equally condemning of Hezbollah for firing rockets into Israel.

James Zogby has been on all the TV shows,....anyone know if he is Sunni or Shia?

11 posted on 07/17/2006 9:24:08 PM PDT by Ernest_at_the_Beach (History is soon Forgotten,)
[ Post Reply | Private Reply | To 1 | View Replies]
To: Flavius
"Early last week, a coalition of 11 major Muslim organizations publicly called on Bush to forcefully condemn the attacks on Gaza and to designate as "war crimes" the destruction of Palestinian civilian infrastructure. "

Did they demand the President nominate Hezbullah for the Nobel Peace Prize, too?

get the HELL out of our country then, you pieces of garbage

13 posted on 07/17/2006 9:24:58 PM PDT by stuck_in_new_orleans
[ Post Reply | Private Reply | To 1 | View Replies]
To: pissant
Lets set the record right. muslims cross into Israel and kill their military and then kidnap two soldiers. Israel proceeds to kick muslims butts. muslims don't like getting what they deserve in a fight they started. muslims try and tell the world that they are the "victims."
World tells muslims "BS". Even other islamic countries condemn muslims who invaded and attacked Israel.
I know it's a lonely place at the bottom of the pig crap heap but that is the hole that islam keeps digging for itself.
14 posted on 07/17/2006 9:26:54 PM PDT by oldenuff2no
[ Post Reply | Private Reply | To 7 | View Replies]
To: Flavius
The policy for the US should be stopping the violence, period, and starting to solve the problem through negotiations

whooope f**king dooo! what else is expected from a Muslim but anger? what are they gonna do? turn on us?

Someone tell the "American Muslims" that AMERICANS are ANGRY that they whine more about poeple defending themselves against terrorism, and freakin' cartoons than they do about TERRORISM!

It is LEBANON's job to protect their families- but Lebanon embraces the terrorists...

Yeah...they are a tolerant bunch of folks (although that babe with the dishtowel on her head must be having a bad hair day).