US celebrities and rights activists have lamented the execution of Stanley Tookie Williams at his funeral.

Hundreds of mourners came to the violence-wracked area of Los Angeles where Williams founded the murderous Crips gang three decades ago.

Vendors sold T-shirts with Williams' picture, and a large TV set up in the parking lot allowed the overflow crowd to watch the service.

Williams was executed on December 13 despite clemency pleas from celebrities and others who said he had rededicated his life to peace.

"It's nine-fifteen on twelve-thirteen and another black king will be taken from the scene," hip-hop star Snoop Dogg told mourners, reciting a poem about the execution.

The line "I don't believe Stan did it" drew wild applause in the parking lot.

Williams, 51, was put to death by injection at San Quentin Prison for the 1979 shotgun murders of a convenience store clerk and three motel owners.

"The war within me is over. I battled my demons and I was triumphant," Williams said in a recording played to mourners, whom he asked to spread a message to loved ones.

"Teach them how to avoid our destructive footsteps. Teach them to strive for higher education.

"Teach them to promote peace and teach them to focus on rebuilding the neighbourhoods that you, others and I helped to destroy."

The veteran civil rights campaigner Reverend Jesse Jackson decried the execution of Williams, who Jackson said saw himself in the end as a "healer, not a predator".

To: beaversmom
The line "I don't believe Stan did it" drew wild applause in the parking lot.

That attitude may have been the biggest factor in him failing to get clemency. Tookie did teach his followers something from jail, stupidity.
4 posted on 12/21/2005 3:40:03 AM PST by msnimje (Political Correctness -- An OFFENSIVE attempt not to offend.)
[ Post Reply | Private Reply | To 1 | View Replies]
To: GBoettner

That can also go to the little white guy "wannabes" who are little advertisements for BET.

by the way, your post says it all except for one thing. That is that this idiot should get the injection too.

"When Tookie gets where he's going, he will sizzle.
That's forshizzle.
Word."


Speak for yourself and those you purport to represent Jesse Jacksoon.

I and my family are safer and more secure.

As for being more humane? Is it not "humane" to put a dog out of it's misery, as the state did to your boy, Tookie?

Dang, he only got the first one right, not good odds.

My understanding is that his refusal to inform on what he knows/knew about the Crips and their organization is the most significant reason for denying him clemency.

A man of peace, does not withhold information that would end violence (by helping to disband the crips) and promote peace.

"It's nine-fifteen on twelve-thirteen and another black king will be taken from the scene," hip-hop star Snoop Dogg told mourners, reciting a poem about the execution.

Always a king, prince, queen or princess.
What is it with these?

Throw another shrimp on the barbie.

15 posted on 12/21/2005 4:19:16 AM PST by toddlintown (Lennon takes six bullets to the chest, Yoko is standing right next to him and not one f'ing bullet?)
[ Post Reply | Private Reply | To 1 | View Replies]
To: beaversmom; All
You all really, really do need to see zombies photos, videos, and commentary-- all of it, not just the unaptly-named Tookie files, but the others as well:

http://www.zombietime.com/tookie/
(MUCH MORE TO COME SOON!)
After a tense showdown, one of the Christian protesters was assaulted by a large group of Tookie supporters. Click here to see the action. (QuickTime mpeg video, 7.7mb) (Clicking on the link above -- and on all the similar links below -- will open a QuickTime video file in a new window. Below each link is an exact transcription of the speaker's words.)

"Racist, sexist, anti-gay! Right-wing bigots, go away!" (Repeated many times.)
(Later tonight I'll be posting more eye-popping pictures and videos of this ongoing showdown between the anti- and pro-Tookie forces.) 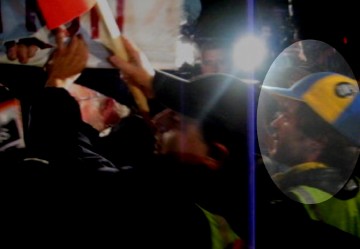 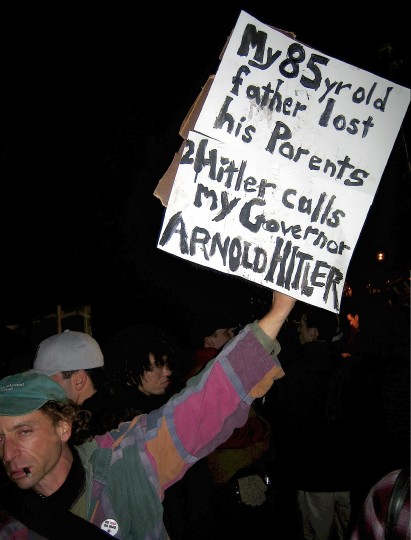 Queers for Palestine decided to branch out a little thematically by making a new banner. Those wacky queers -- they're always thinking up something to be for or against! 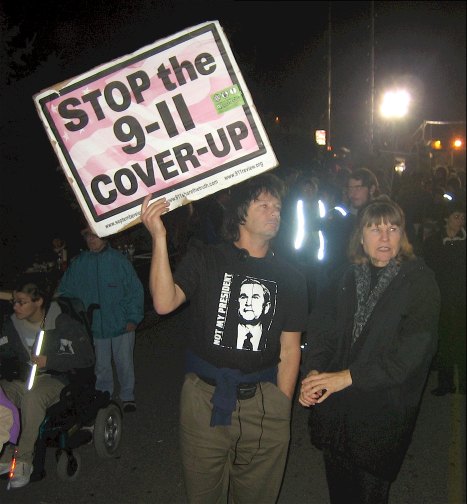 And of course it wouldn't be a true protest without some comforting "9/11 cover-up" signs.

After I left, apparently, some anarchists burned an American flag outside the prison. I missed that glorious moment, but it was captured by an Associated Press photographer and included in the San Francisco Chronicle's coverage of the event.
This software will play the above videos:
http://www.videolan.org/
VLC is a free cross-platform media player.

In particular, seek out the photos of the "dicks not death," "breasts not bombs," the Lesbian Masturbators, and The Scrotum Inflator.
Found here:

No, I am not kidding and I aplogogize for the bluntness but that's what they call themselves.

You really need to see what sort of extremists, manipulators, frauds, and fakirs plague some parts of the US.

These disreputable charlatans use, abuse, and manipulate America's laws and hospitality- but they are no friends of America, or Americans.

Listen carefully to some of the chants featuring "Right-wing bigots, go away!" and you will hear "Born-Again Bigots," instead.

These characters don't seem to have much use for religious folks- just butchers.

Thanks--my husband was telling me about these just last night.