In the United States, we already have laws prohibiting torture. But, that wasn't enough for Sen. John McCain (R-AZ). McCain apparently "feels" (one of those liberal things) that torture is 'anything that makes terrorists uncomfortable'. Holy Smokes, Senator! Terrorists are supposed to be uncomfortable. Not only does McCain not want those who blow up people, buildings and behead those they haven't already killed to be treated with a gentler and more soothing attitude, he has also managed to push this anti-American enemy bill through--with terrorists now being extended rights under the US Constitution!

Personal Message to Senator McCain: It really is time, Sir, for you to run under the flag of your true belief system--the Democrat Party. Senator, we already know you that don't like conservatives and will attempt to run for President under some liberal platform. Certainly, you say you support the troops. But, your new "Al-Qaeda Rights Package" contradicts your words. I guess Hillary already has the Dem nomination pretty well sewn up--despite the insincere protestations from the Left. So, you won't be able to run as Prez for the Dems. I'm also guessing that joining Hillary as her running mate--for VP--is completely out of the question. But, with your ongoing liberal antics, do you really believe you'll win the Republican nomination? If so, you've been out of touch with the voters for way too long. To the mainstream liberal press, you're the Republican darling. But, it's the majority of Republicans--not Democrats--who will nominate a Republican presidential candidate. And like it or not, Senator, a great many Republicans still support a conservative ideology. Do you still remember what that entails?

If not, please allow me to assist in refreshing a few lost memories. To name but a few, Conservatives believe in less government, meritocracy and protecting American citizens from their enemies. The American people do not believe that extending more rights to barbarians and murderers will have any positive effect on either our country or to aid in their protection. In actuality, the Islamo-fascist terrorists see this move on your part and the parts of your liberal brethren as an act of appeasement and weakness. Surely, you know that. Or is it that you truly believe that there is a large enough liberal contingent in the Republican Party to nominate you for POTUS in 2008? This would be the contingent that includes liberal Senators Craig, Sununu, Murkowski, Hagel and Specter. Note: This is another gang of Democrat groupies that really should consider a switch in their Party affiliation.

Senator, both you and your state would be better-served if you flew the colors of the Democrat Party. Besides, you've been moving in that direction for years. You would be more comfortable there. Then, your constituency would actually know where you stand! And at least the Democrat Flag and Banner still contains one color that appears in the US Flag. Or is white considered a non-color?

Now? A little slow in the get-along aren't we?

Senator McCain is a mental disorder.

McCain is a good conservative who will more often than not, be on our side as opposed to the democrats who will always be on the wrong side.

Americans will die because of this.

McCain has always been liberal...He's gotten worse since he had his cancer.....

No commitment to a philosiphy....just pander to whatever audience is in front of him at the time....

He is defective a traitor a loose cannon puts tacks on Bush's chair, a shameful vet. 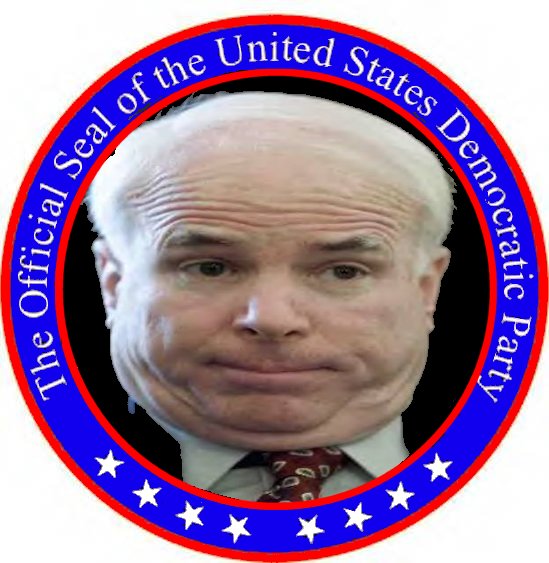 This guy has always been a lib republican. He will never switch parties.. He gets more press being a republican thats a lib then a rat thats a lib. Press is 2nd only to money when it comes to running for office.

This may all be part of a concerted effort by the powers that be...to accept a truce with the Sunni Muslims so they can join us in liberating Iran.

If we are seen as "becoming less violent" the Sunnis can pretend that they were the innocent peace loving crowd all along...and we only just got the message not to try to settle things with "violence".

It is clear that Bush/McCain want to "take a dive" for one reason or another...and I suspect that it has something to do with the overtures of the Sunnis to stop the insurgency.

Meanwhile, the cover of Der Spiegel in Germany this week is all about the CIA torturing people, but the photo on the cover is of Canadian soldiers leading prisoners to an airplane in Afghanistan! When I tell Germans that, they start laughing about how demogogisch Der Spiegel is these days.

Local newspaper headlines yesterday read "Bush changes position on torture". Thinks to the nut case, the papers got the headlines they wanted.

Shouldn't the American people decide what extent their government will go to to protect them? I personally would have a terrorist torured to near-death to save a family member.

Rush was right: It's the Al-Qaeda Bill of Rights...

C'mon...the guy was seriously considered by the Kerry camp as a running mate. And this guy is only now realizing that McVain is a Liberal? Hell, it was clear as crystal the moment we realized that McVain's base is the frickin' Leftist media!