MARINE CORPS BASE HAWAII, KANEOHE BAY, Hawaii (Dec. 2, 2005) -- Like hail during a thunderstorm, the bullets landed all around the Marine as he simultaneously fired two M-16 service rifles, one in each arm. His own weapon and the weapon of his platoon sergeant, who was busy carrying another wounded Marine on his back to safety, continuously erupted as he methodically emptied magazine after magazine into the insurgent position.

The four Marines were in an open field in Fallujah, Iraq, with no cover. It was later called a miracle that any of them survived, especially considering that two rocket-propelled grenades had also been fired upon them, the shrapnel going every which way but inexplicably missing their flesh.

For his actions that day, and throughout Operation Iraq Freedom II, while serving in an officer’s billet as the platoon commander for 1st Platoon, Charlie Company, 1st Battalion, 3rd Marine Regiment, Staff Sgt. Ralph Scott was awarded the Bronze Star with the “V” device — authorized for acts or service involving direct participation in combat operations.

But that medal only begins to tell the story of Scott, a man with an unyielding sense of duty toward his fellow Marines, according to his platoon sergeant who served with him that fateful day — Sgt. Michael Chambers of Lexington, S.C.

“When Staff Sergeant Scott first came to us in Charlie Company, all he said to us was, ‘My whole entire job — I don’t care if it takes my life — is to bring you all home,’” said Chambers, recalling his initial meeting with Scott. “I’m here to tell you that he stood behind his word.”

Nine of the 14 Marines in Charlie Company’s 1st Squad from 1st Platoon were wounded that day in Fallujah, but all of them survived, and are alive today, either directly or indirectly because of Scott’s leadership and actions, noted Chambers.

“Anybody from that platoon, seeing what he did …” started Chambers, his words drifting off into the contemplative reflection of a man who has seen things others care not to imagine. “My words can’t do him justice,” continued Chambers. “All I can say is you won’t meet another man like him. Every battle we were in, while Marines would naturally and instinctively hit the deck when the first barrage would hit, Staff Sergeant Scott would be there standing, already simultaneously returning fire. We would follow his lead. There’s no finer man, no fiercer warrior that the Marines have ever sent into battle than that man. I would go back to combat with him in a second.”

Chambers may get his chance, as both he and Scott are slated to deploy with 1/3 on its upcoming deployment to Afghanistan in support of Operation Enduring Freedom, although Scott, who currently serves as the 1/3 assistant operations chief, is no longer in Charlie Company.

“In my heart, I’m still with Charlie Company,” said Scott, a Tallahassee, Fla., native who joined the Marine Corps at the age of 17, soon after graduating high school. “Whatever job the Marine Corps gives me, I will do it to the best of my ability, but I’d be lying if I said I’d rather be here than back with the grunts.”

The men of Charlie Company said they felt the same way, in particular, the ones who served with Scott in Fallujah.

“Staff Sergeant Scott is one of those Staff NCOs who you can tell cares about his Marines,” said Lance Cpl. William Duffield, a 1/3 rifleman from Ridgway, Pa. “I saw with my own eyes the way he was over in Iraq. It would be hard for me to pick a particular day where he distinguished himself, because he was distinguishing himself every single day, every single battle. It makes me proud to know I served with him.”

“I got hit with 13 pieces of shrapnel from my legs all the way up my back in Iraq,” added Lance Cpl. Christopher Harris, a 1/3 rifleman from Jasper, Texas. “There were other Marines who got shot up worse than me that still lived. Sometimes I feel lucky to be alive. Marines like Staff Sergeant Scott are a big part of the reason we are still here, still breathing. He would never leave another Marine behind. We were like a big family over there. Staff Sergeant Scott knows what it’s like. He was raised in the grunts.”

Indeed, just two years into his first enlistment, Scott found himself in Iraq during the Gulf War in 1991, but he characteristically downplays the numerous accomplishments throughout his Marine Corps career.

“I wake up every morning, and I come to work,” said Scott. “Whether work happens to be behind a desk in Hawaii or on a battlefield in Iraq isn’t really the point. The point is to do your best and give your best effort at all times and in all situations.”

According to Maj. Michael Miller, 1/3 executive officer, Scott’s philosophy is one he respects. “Nobody goes out and says, ‘Hey, I’m going to get the Navy Cross today or the Bronze Star today,’” said the Boalsburg, Pa., native. “You just stumble into a bad situation, and the only way to make it go away is to prevail over your foe. It is an exceptional person who steps up above and beyond what is considered normal duty — and those types of Marines have prevented some catastrophic events due to their personal actions.”

There is no argument among the Marines in Charlie Company who served with Scott in Iraq that he is one such Marine.

“He (Scott) stepped up to the plate in Iraq,” said Lance Cpl. Justin Deleon, a 1/3 anti-tank assaultman from Marquez, Texas. “He was holding an officer’s billet. He was an underdog, but he stepped up and delivered. Under his leadership, we all formed a bond in Charlie Company that can never be broken.”

“If Staff Sergeant Scott gets a mission, it gets done. Simple as that,” added Lance Cpl. Chris Berggren, a 1/3 rifleman from Lincoln, Neb. “Seeing with my own eyes what he did over in Iraq, it doesn’t surprise me at all he was awarded the Bronze Star for valor. He deserves it.”

As Scott prepares to deploy to Afghanistan, he reflected back to his days in Charlie Company.

According to Sgt. Maj. Michael Berg, 1/3 sergeant major, men like Scott are a breed apart.

“Most people hear gunfire and they run away from the danger,” said the Plymouth, N.H., native. “Marines don’t have that luxury. Marines run directly into danger, and Marines like Staff Sergeant Scott lead the way.”

Scott, a 1989 graduate of Amos P. Godby High School in Tallahassee, Fla., is currently in the process of writing a book about his experience in Iraq. He also plans on completing his degree in criminal justice from Florida State University before attending law school at FSU after he retires from the Marine Corps.

“I had two dreams as a kid,” said Scott. “The first one was to be a Marine. The second was to graduate from law school. I don’t know if I’ll ever be a practicing attorney, but I want to have the option.”

According to Scott, after retirement, he plans on settling down in Florida. Though he plans on doing some traveling with his wife Ingrid, including a trip to Europe, he said after seven deployments — Afghanistan will be his eighth — that he is ready to stay put for a while.

It was a deployment, however, that led to Scott meeting the woman who would eventually become his wife.

“I was on a goodwill float to South America in 1993 and was on liberty just walking around,” recalled Scott. “It was God’s will that we even met. We struck up a conversation, and after I returned to the U.S. we started corresponding, then dating, and eventually we married. It was the best thing that ever happened to me.”

For her part, Ingrid, a professional language translator, said she is proud of her husband’s accomplishments, but worries about him just the same.

“Before my husband left for deployment, I had the chaplain bless him,” said the Valparaiso, Chile native. “Having your husband deployed to combat is very stressful. I couldn’t find the words enough to describe the stress you go through; how you become a slave to the news — not knowing who’s dead — waiting endless hours for the knock at the door. It’s something that can really tear you apart.”

Ingrid said her faith in God and the emotional encouragement she has received from the 1/3 key volunteers has been a blessing.

“It helps so much, having the support of the other wives from 1/3,” commented Ingrid. “It makes you know that you’re not alone — that you’re not the only one going through it.”

As Scott gears up for another combat deployment, he speaks with the confidence of a man who knows what he’s headed for.

“I’ve never been to Afghanistan, but I’ve been to war before,” said Scott. “I can tell you 1/3 is ready. I’m ready. The Marines will always be ready. That’s just a fact. Our commanders are the best infantry commanders in the world. They’re ready. They got a game plan. I’m excited — not for the purpose of loss of life, because I know Afghanistan is going to be hazardous — but from the perspective that I know we are ready to accomplish the mission. I feel totally confident.”

Staff Sgt. Ralph Scott, a native of Tallahassee, Fla., stands in front of a burning building in Fallujah, Iraq, during Operation Iraq Freedom II. Scott was recently awarded the Bronze Star with combat “V” for his heroism in Iraq while serving in an officer’s billet as the platoon commander for 1st Platoon, Charlie Company, 1st Battalion, 3rd Marine Regiment. Photo by: Photo Courtesy of Staff Sgt. Ralph Scott 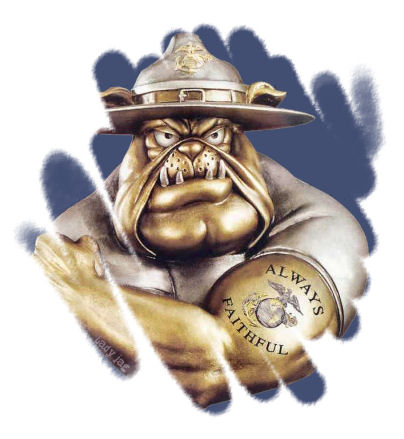 "We never leave anyone behind!"

Thank you, Sgt. Scott - from the bottom of my heart, thank you.

I pray that God continues to guide every combat move you make - and to keep an eye on you in all other endeavors.

You are truly special.

I see the glint of your Scots ancestry in your eyes!

When an enlisted man gets the Bronze Star he usually deserves it.

But no offense to any officers on here but the standards for Bronze Stars for officers is way lower. That is why I am not impressed with Murtha's Bronze Star because he was an officer

8 posted on 12/02/2005 6:03:41 PM PST by Swiss
[ Post Reply | Private Reply | To 6 | View Replies]
To: SandRat
The man has more guts and character in his little finger than I do in my whole body. The country is blessed to have those like him. Most of our 'leaders' in Washington aren't fit to clean his boots.
9 posted on 12/02/2005 6:14:19 PM PST by paul51 (11 September 2001 - Never forget)
[ Post Reply | Private Reply | To 1 | View Replies]
To: ducks1944; Ragtime Cowgirl; Alamo-Girl; TrueBeliever9; maestro; TEXOKIE; My back yard; djreece; ...
The four Marines were in an open field in Fallujah, Iraq, with no cover. It was later called a miracle that any of them survived, especially considering that two rocket-propelled grenades had also been fired upon them, the shrapnel going every which way but inexplicably missing their flesh.

For his actions that day, and throughout Operation Iraq Freedom II, while serving in an officer’s billet as the platoon commander for 1st Platoon, Charlie Company, 1st Battalion, 3rd Marine Regiment, Staff Sgt. Ralph Scott was awarded the Bronze Star with the “V” device — authorized for acts or service involving direct participation in combat operations.