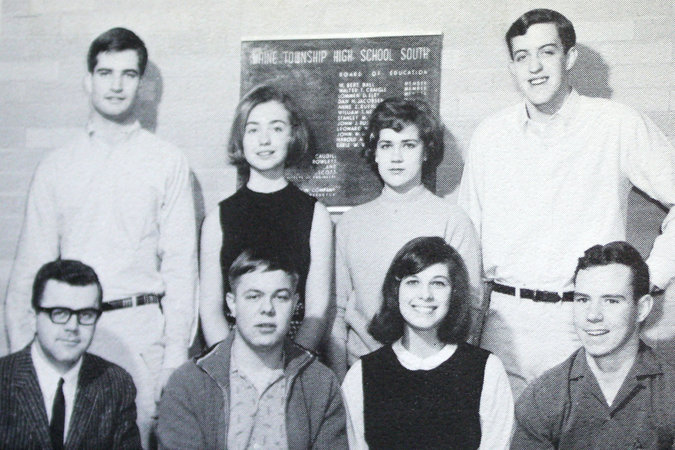 Hillary Rodham, second from left in the back row, with her debate team in 1965 at Maine South High School in Park Ridge, Ill. She was known for her debating skills as a student.

When Hillary Rodham’s high school government teacher in Park Ridge, Ill., insisted she play the role of Lyndon B. Johnson in a mock debate of the 1964 presidential election, she protested.

Ms. Rodham, one of the school’s standout debaters, was a proud Barry Goldwater supporter (she wore a hat with an “AuH2O” logo) and an active member of the Young Republicans. But the teacher, Jerry Baker, was intent on challenging her to argue the other side.

Always a dutiful student, she agreed, settling into the library to pore for hours over Johnson’s positions on civil rights, foreign policy and health care. She prepared with such ardor and delivered such a compelling case that she even convinced herself. By the time Ms. Rodham graduated from college, she was a Democrat....

She is going to be so CHARMING we won’t recognize her.

Trump’s track record would suggest that we don’t know that and you just think that.

Trump knows how to prepare, and can be good when he’s focussed. Plus, his style is getting more polished each day as the campaign continues.

A real open debate between Trump and Hillary would be good, and you can be damn sure Hillary will be facing tough questions & accusations, and will also - for the first time in her life - have nowhere to hide.

They will protect Mrs. Clinton at all costs.
She most probably has been given all the questions she will be asked like usual.
Moderators wil do their best to make this sexual predator enabler look presentable.

What did I miss? When is HRC debating Trump?

The fake, proud, mocking, beaming, smiling smirk she gave with that response really got my goat.

I hope her failure is spectacularly televised.

I just lost my breakfast... what ever happened to the “Barf Alert”? I guess I should have taken it for granted when I saw it was a NYT article.

This is nonsense. Hillary was a horrible debatot against Obama and got her butt kicked every time they were on stage.

Don’t want Carley as prez candidate, but would love to see her debate Hitlary.

(for the record, both the Weather Underground AND the Black Panthers were communist-revolutionary domestic terrorist groups -ETL)

HILLARY:
"I also believe that Senator Obama served on a board with Mr. Ayers for a period of time, the Woods Foundation, which was a paid directorship position.

And, if I'm not mistaken, that relationship with Mr. Ayers on this board continued after 9/11 and after his reported comments, which were deeply hurtful to people in New York and, I would hope, to every American, because they were published on 9/11, and he said that he was just sorry they hadn't done more.

At Yale, Hillary helped edit the Yale Review of Law and Social Action – a left-wing journal which promoted cop-killing and featured cartoons of pig-faced police. (3)

As long as there is no fact check she will do well.
That holds especially true for Biden, when he jumps in, and he will.

She may have been doing these things since childhood but she remains a poor liar and deceiver. Bill far outclasses her in the lying, deceiving, corrupting, retaliating, and cheating categories.

Go to the end of the line! (13 seconds long clip) https://www.youtube.com/watch?v=fiRZiANcbco

We want her to debate. She is hiding and has been for months. The more she is in the public’s view, the less she is liked. She is not smart as portrayed earlier. She flip flops on positions because she can. X % will vote for her anyway. She is starting to lose the Unions. Dems will kick her out soon enough.

Ah yes, but we get to decide who is lying! Nevermind, most folks won’t watch and the media will tell them who is lying.

What is it with libs and school? All of them take their best memories and life experiences from...school. Decent Americans get their life experiences from WORK and/or The Military. But you’ll notice that libs are obsessed with their degrees, their averages, their valedictorian status and belong to endless alumni clubs. It makes them nitwits.

And I don’t remember Hillary outshining Obama in their debate.