A Florida man angry with his homeowners association set his unit on fire, causing an explosion that damaged other units and shot himself afterwards, authorities said.

Marc Hermann, 53, was arrested Monday and is being held in the Seminole County jail on four arson charges.

The fire broke out on Jan. 14 in a small apartment community in the Orlando suburb of Longwood, according to a police affidavit. A responding deputy found Hermann sitting on the ground draped in towels and bleeding, the documents said.

When asked about his injuries, Hermann allegedly told authorities they were caused by a gun. He then blamed the apartment management company, saying it was responsible for what happened.

He allegedly told a paramedic who was treating him that he "started the fire in an act of revenge against the Homeowners Association in charge of his property." Hermann also said he "shot himself in the neck after starting the fire," the report said.

That’s one way to get back at the man.

I had a look at his photo and, going by that, I am sure this made perfectly good sense to him.

Now the man AND his neighbors will all be fined by the HOA for failing to maintain their property.

“...and shot himself afterwards, authorities said. Marc Hermann, 53, was arrested Monday and is being held in the Seminole County jail on four arson charges”

I guess he missed?

Wow! This Florida Man is a litany of Epic Fail.

Seems like just his appearance would disqualify him from a HOA. 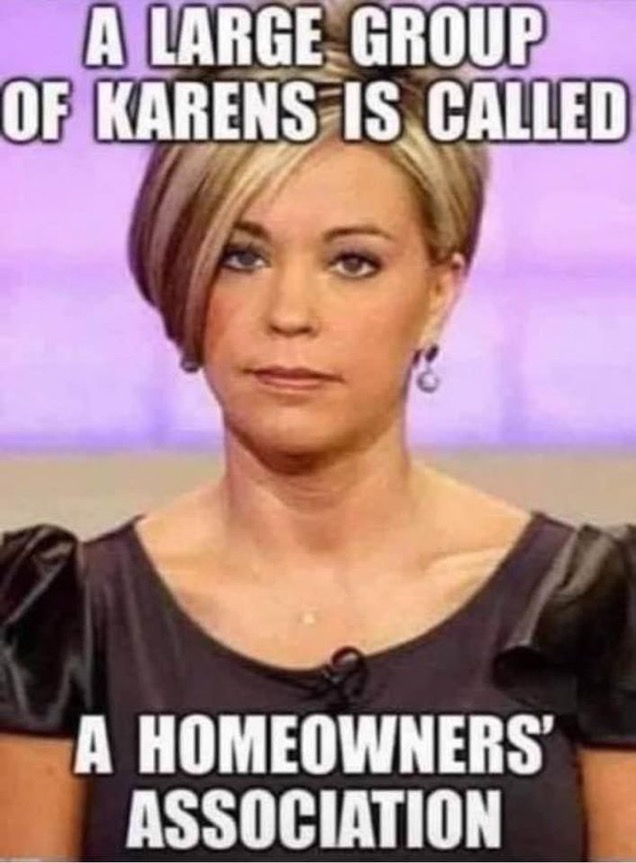 Just look at his “After HOA” picture.
Looks like Amityville Horror, Part 2.

Before reaching this point, most people would conclude it’s time to move, even if you have to break the lease agreement.

We live in a condo and thus -— HOA

The HOA president is a black woman who fired the office staff that were making more than $100K a year. She had landscape companies bid to mow the grass (Then took two - one every other time to see which is best). Took the slumlords who hadn’t paid HOA fees to court and repossessed the properties. She has re-roofed the entire complex and hired security to patrol the ground. According to the maintenance man, she also had the stray dogs in the complex disposed of under the table. She wants to charge landlords $15.00 a month more than owner residents in HOA fees because renters cause more problems. But her name is Virginia, not Karen

No use talking to him. This guy reminds me of the Stir Crazy scene where former record holder for serial killing victims, Grossberger is in his cell.

(Gene Wilder): “I wonder what triggered all that violence? He seems so gentle. I see what it is. Nobody has ever just sat down and honestly talked to that man. Poor kid.”

Looks a little like a blowed up Matt Bracken.

“.... he “started the fire in an act of revenge against the Homeowners Association in charge of his property.”

I totally understand his sentiments. “Not guilty” your honor.

My family and I are about to put my late mother’s rural 10 acres and house, located in a southern red state, on the market. I understand the fact that it is surrounded by farm land and nowhere near an HOA is a big selling point.

Sorry he is indeed guilty. All of his problems with the HOA were self-inflicted. Guy is a yo-yo.

My brother lives in that development and is quite well acquainted with the whole situation. The man has been an ongoing canker sore for his neighbors and the association.

If you live in a condo, you are the association. That president is just another owner. If you want things done right, get on the board.