Putin has no questions about the money allocated for the army, also for the reason that in exchange for the stolen, Defense Ministry officials are ready to carry out any, the most “dirty”, order of the head of the Russian Federation.

High-ranking officials with real estate abroad and fabulous incomes that are not declared – this is what the new investigation of Alexei Navalny’s team is all about. It was dedicated to the Deputy Minister of Defense of the Russian Federation Alexei Krivoruchko.

According to the plot of the FreeDom project, according to international financier Bill Browder, such officials in the Russian Federation as Krivoruchko became the main cause of corruption in the army.

“Corruption in Russia is so widespread that virtually nothing works. Everything related to the state does not work. They are not in a position to conduct military operations. 80% of the money that should have gone to war was stolen, and that’s good,” – Browder said in an interview with The Wall Street Journal.

Lawyer Nikolai Polozov also agrees that corruption has affected the combat effectiveness of Russian troops. Thanks to officials such as Shoigu and Krivoruchko, Russian tanks are left without dynamic protection and become fairly easy targets.

“The corrupt nature of the Putin regime and its officials, it just manifests itself in the fact that for a long time, more than 20 years, the main idea was to steal as much as possible in those positions, with the opportunities that these officials had. And to provide these stolen future for their children,” Polozov says. Ruslan Shaveddinov, an employee of the Anti-Corruption Foundation, said that the Russian Defense Ministry is one of the most corrupt departments. And so Shoigu himself became fabulously rich and “made rich” his family. Everyone in his circle in this ministry is also corrupt.

According to Shaveddinov, the Ministry of Defense of the Russian Federation was one of the most corrupt and unpopular departments among the people, for which more and more money was allocated from the budget every year. And at the same time, more and more was stolen. He stressed that no one was engaged in either reforming the army or any kind of training of their own soldiers.

“They (officials in the Russian Ministry of Defense – UNIAN) were not ready for this war, they lived simply by enriching themselves and pocketing the budget,” the FBK official noted.

Journalists asked Shaveddinov if Putin would not ask Shoigu where the money allocated for the army for all these years had gone.

“He does not ask such a question. Shoigu knows that there are no such questions, some small contractor of the Ministry of Defense of the Russian Federation periodically also covers Shoigu for the press. The contractor is imprisoned, and then those huge sums that are stolen” – explains the FBK employee .

In addition, Putin has no questions about the money allocated for the army, also for the reason that in exchange for the stolen, Defense Ministry officials are ready to fulfill any, the most “dirty”, order of the head of the Russian Federation.

Earlier, the Navalny Foundation said that the daughters of Russian Deputy Defense Minister Alexei Krivoruchko found American citizenship and the right to receive it. At the same time, the top official himself owns luxury real estate for half a billion rubles. 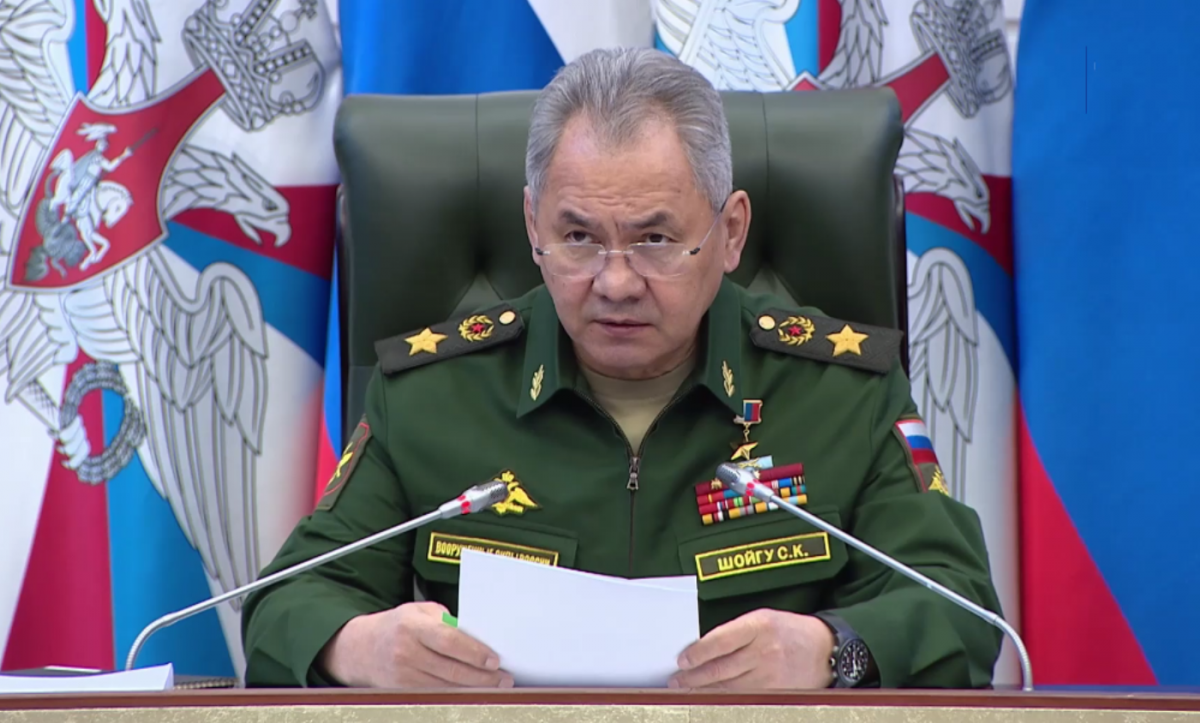 VIDEO:
Shoigu and his entourage stole 80% of the money for the war
https://www.youtube.com/watch?v=amq4PEmeds8

I read today via the German news....contracted Conscripts for the Russians are being rotated out to some remote Russian base...given their civilian clothing back, and the cash promised for their couple of months in the war-zone...was NOT forthcoming. The base didn’t even offer a ride to the local bus station.

Even now, someone is still taking a major cut on funding.

“They (officials in the Russian Ministry of Defense – UNIAN) were not ready for this war, they lived simply by enriching themselves and pocketing the budget,” the FBK official noted.

—
When early reports on just how bad the Russian Army was (in training and equipment) I posted it was most likely because of corruption (from top down).

All bureaucracies have to potential for corruption but the communist system actually encourages it (indirectly).

The biggest problem (but not the only one) is that every one is on the take. The next problem is that the leadership at each level does not want to hear any bad news. Good news is rewarded and bad news is punished, so who is going to be a whistleblower?)

Deflecting to highlight the corruption in Russia while never ever once highlighting the utter corruption of Ukraine. Typical. Truth be told, the deflection is more akin to changing the topic off of high Ukraine is imploding militarily....given that vaunted million man army never materialized, Ukraine has resorted to recruiting handcapps, the elderly, the mythical Kherson offensive did not happen as foretold and will not happen, Ukrainian tanks. planes, and artillery are nearly exhausted, half the HIMARs sent by the US are destroyed, the German artillery sent is sh*t, etc., etc. Ukrainian pin pricks won’t win this conflict nor turn the tide of its inevitability.

The replies at the site are interesting:

“Yes, this unabashed and deep-seated corruption in mafia land saved a lot of Ukrainian lives and cost a lot of cockroach ones. And, fortunately, there is no end in sight to this enormous corruption. Every new effort to pump more money into the military complex will also result in the funds being drained away into dark channels.”

Think about it - Russia is a much larger (by 3X in population), more so in per-capita developed resource value, in GDP, in exports, in military budget per capita, in military infrastructure, stockpiles, production, technology, etc. and etc.

And most important, the degree to which it is a potential or actual threat to its neighbors - a function of its size in all dimensions, as above.

Nobody fears Ukraine. Its corruption (to the degree it is as corrupt as Russia, if it is, no such assertions are proven, the usual rating agencies say Russia is worse), is on a vastly smaller scale (because, as above, Ukraine is so much smaller in every dimension) and has no bearing on its potential threat to anyone else.

Russia matters, and if its military is crippled by corruption that is of interest to everyone. That has global strategic and political implications.

Of global strategic and political implications?
Really?
To whom exactly?

But let’s focus on the Russian corruption and not the sheer amount of corruption contained within the US?

Russia and Ukraine are corrupt. So is the US and the whole western world. Seems if you are FOR Ukraine you would be far more concerned about the corruption of Zelensky and his oligarchs.

I find this obsession with Russia very odd and suspect. Seems you would be glad if Russia was hurting Russia.

The only real money the Russians could make came from transportation to and from the Space Station. Now that SpaceX can transport people and cargo, we no longer have to depend on the Russians. Another win for free enterprise.

The leftists & the anti-Trump factions are both renowned for projecting their actions upon Trump or conservatives, depending upon whom they want to deflect onto at the time, and you fell for it again.

Meanwhile even ABC, or one of the other alphabet news sources, slipped and printed the truth that very same story-line regarding Ukraine, but then suddenly pulled it back.

You are such a gullible person, and that's using my kind take on you.

What has even more strategic and political ramifications, are the fact that pushing Russia further away, means that we are pushing them towards China, with China embracing them in return.

You apparently are very short-sighted when it comes to considering the strategic and geopolitical consequences of engaging in regional conflicts for which we really have no real national security concerns regarding said conflict.

To all of Russia’s neighbors, which it has been in the habit of threatening whenever they feel like it. Its been going on for years. And this applies to non-Euro non-Nato places like Azerbaijan and Kazakhstan also. Or even, perhaps, to Korea or Japan, should Russia offer to support North Korea again.

Ukrainian corruption matters only to Ukrainian military capability in this current war. If they are hampering themselves so, it is their problem.

Russia is a marginal player in “conventional” warfate, as has become clear in recent months, and better information as to the state of its social institutions, as in this case in re corruption, is also relevant as to whether it matters that the current Russian government is “pushed” into a Chinese axis.

From the Chinese point of view, planting my behind in Beijing, I am thinking that Russia looks like more of a white elephant than an asset. Worse, it has a very inconvenient potential of creating crises that may commit China when it would rather be left free to maneuver. This sort of thing goes both ways. I doubt that China really wants an alliance with what is, internationally, a psychopathic hobo.

Soros money is hard to resist.

18 posted on 08/14/2022 12:09:52 PM PDT by entropy12 (Trump pp& MAGA are the only way to keep USA viable.)
[ Post Reply | Private Reply | To 11 | View Replies]
To: buwaya
China has already stated, out loud, that they will side with Russia if Russia is attacked. China does benefit by knowing that Russia & the U.S. are both incompetent & led by weak leadership. China, for now, is content to play the two against each other with both depleting their military assets in useless exercises of futility adventurism. In addition, NATO and Europe are deleting their military assets as well.

That is why neither NATO nor the U.S. will get involved militarily, not that I am complaining about that. Just pointing out that fact. But financial assistance is all too readily provided.

The press, along with our leaders, in both parties, keep pushing the false narrative that Russia wants to reconstitute the U.S.S.R. Even you apparently see that narrative is nothing more than a lie. So, we are gaining nothing. We are losing assets along with spending copious amounts of monetary wealth, and the Ukrainian people are losing severely in every way imaginable. The sensible thing to do is work towards a solution, not continued carnage. The definition of insanity is to continue doing what you are doing after you have recognized that your actions are destroying you.

Therefore, the Chinese become the big winners, while their enemies/competitors are busy destroying themselves as they burden their future generations with even more debt before they can even walk or become adults.

It that what you really wish for your children & grandchildren? Because you are in no way helping the Ukrainian people whatsoever.

However, at some point in time they know they will have to engage with the U.S. militarily if they are ever to secure world domination.

What a piddling set of ribbons vs Milley.