Cornyn is a senior member of the Senate Judiciary Committee who negotiated with Sen. Chris Murphy (D-Conn.) last year on legislation to expand background checks for commercial sellers but without success.

Cornyn scored one of the few notable accomplishments on gun violence legislation in recent years when he coauthored and helped pass the Fix NICS Act in 2018. The legislation required federal agencies to produce plans for uploading all relevant information to the National Instant Criminal Background Checks System.

McConnell tapped Cornyn to lead the negotiations for Republicans shortly after a bipartisan group of senators met in Murphy’s basement to begin talks in hopes of finding a way to respond to the Buffalo and Uvalde shootings.

Cornyn has an A-plus rating from the NRA and McConnell has praised him for knowing more about gun-safety policy than anyone else in the Senate GOP conference.

McConnell showed his interest in passing a bill to respond to the violence in Buffalo and Uvalde when he tapped Cornyn to lead the negotiations with Democrats.

A Republican senator close to McConnell said the leader’s decision to task Cornyn with the job showed that he wanted to get a positive result.

McConnell later said as much when speaking to reporters this month.

“I am hopeful that we could come up with a bipartisan solution that’s directly related to the facts of this awful massacre,” he said in late May.

McConnell announced last week that he would support the gun-safety bill if it hewed to the bipartisan framework endorsed by 10 Republican and 10 Democratic senators on June 12.

McConnell also has an A-plus rating from the NRA.

Tillis made up the core negotiating group along with Cornyn and Democratic Sens. Chris Murphy (D-Conn.).

He was initially seen as skeptical toward gun-safety legislation when early on during the debate he raised concerns about red flag legislation but once Cornyn and McConnell brought him into the talks he turned out to be a valuable asset to the negotiations.

Tillis is viewed as a good political barometer of the Republican Party and his support for the framework likely encouraged other Republicans to sign on.

He has an A NRA rating.

Collins is one of the principal dealmakers in the Senate and she attended the first meeting in Murphy’s hideaway in late May. Collins was particularly active in the talks to combat illegal straw purchasing and firearms trafficking.

She introduced the Stop Illegal Trafficking in Firearms Act in April of last year.

Collins has a B rating from the NRA.

Graham cosponsored legislation with Sen. Richard Blumenthal (D-Conn.) in 2018 to amend the federal criminal code to authorize and establish procedures for a family member or law enforcement officer to request a court order to take away a firearm from someone judged to pose a risk to himself or others.

Graham attended the first meeting of the bipartisan group in Murphy’s hideaway and said afterward that he supported legislation to create incentives for states to administer red flag laws if they chose.

Graham has an A rating from the NRA.

Cassidy worked on the mental health component of the gun safety bill and participated in the first bipartisan discussion in Murphy’s office via telephone.

Cassidy is building a reputation for himself as a bipartisan dealmaker. He signed a statement last year endorsing a $1 trillion bipartisan infrastructure framework, which paved the way for the deal eventually passing.

Cassidy has an A rating from the NRA.

Blunt is the chairman of the Senate Republican Policy Committee and a close ally of McConnell’s.

He’s not as moderate as other Republicans who signed onto the bipartisan framework on gun-safety principles earlier this month.

McConnell’s desire to get a result on gun-safety legislation may have helped Blunt vote yes. He is retiring from Congress at the end of the year.

Blunt has an A rating from the NRA.

Burr is another McConnell loyalist who is retiring from Congress at the end of this year.

The prominent role that his home-state colleague Tillis played in the talks gave Burr more incentive to vote for proceeding to the bill.

He also signed onto the bipartisan framework of principles released on June 12.

He has an A-plus rating from the NRA.

Romney has emerged with Collins and Sen. Lisa Murkowski (R-Alaska) as the three most likely Republican swing votes in this Congress.

Romney kept his involvement in the discussions pretty low-profile but he signed the June bipartisan framework.

He played a prominent role in negotiating last year’s bipartisan infrastructure bill and earlier this bill hashed out a compromise with Senate Majority Leader Charles Schumer (D-N.Y.) on a $10 billion COVID relief package.

He is one of the biggest bipartisan dealmakers in the Senate and has an A rating from the NRA.

Portman was one of the 10 Republican senators who endorsed the June framework along with 10 Democrats.

He is an advisor to McConnell’s leadership team and will retire from Congress at the end of the year.

Portman was one of the lead negotiators on last year’s bipartisan infrastructure bill. More recently he has emerged as the Senate’s leading champion for supporting Ukraine’s fight against Russia’s invasion.

He has an A rating from the NRA.

Capito was one of the four surprise Republican votes for proceeding to the gun safety bill Tuesday evening.

Capito did not endorse the June framework and when asked about it said she would have to review the details of the legislative text before rendering an opinion on whether she would support or oppose the bill.

Capito is also an advisor to McConnell’s leadership team and her home-state colleague Sen. Joe Manchin (D-W.Va.) was an early participant in the bipartisan discussions on responding to the violence in Uvalde.

Capito has an A rating from the NRA.

Ernst didn’t endorse the bipartisan framework when it was first unveiled this month and also said she wanted to review the legislative text before making a decision.

Ernst is a member of McConnell’s leadership team as the vice chairwoman of the Senate Republican Conference.

She was seen as a possible yes vote after she signaled willingness to consider raising the minimum age for buying an AR-15-style rifle to 21.

She has an A rating from the NRA.

Murkowski was viewed as a mystery vote heading into floor consideration of the gun safety bill.

Murkowski deflected reporters’ questions about the various gun-safety proposals in recent weeks by saying she was focused on other issues.

She played a leading role in negotiating last year’s $1 trillion infrastructure bill and isn’t afraid to break with the majority of her conference on big votes.

Murkowski is up for re-election in November but she has a built a political base for herself in Alaska that includes many moderate Republicans, independents and Democrats.

She has an A rating from the NRA.

Young was one of the biggest surprises to emerge on Tuesday after he voted to proceed to the legislation. 0.

Young has a pragmatic streak and knows that showing independent voters and suburban women, two key electoral blocs, that Republicans know how to govern is good politics in general elections.

Young is a former Marine Corps intelligence officer and has an A-plus rating from the NRA.

Isn’t it amazing how this happens emotions rule over the Constitution.

And the notion that these folks should get our votes under any circumstances including General Elections should be rejected.

thanks once again uniparty. 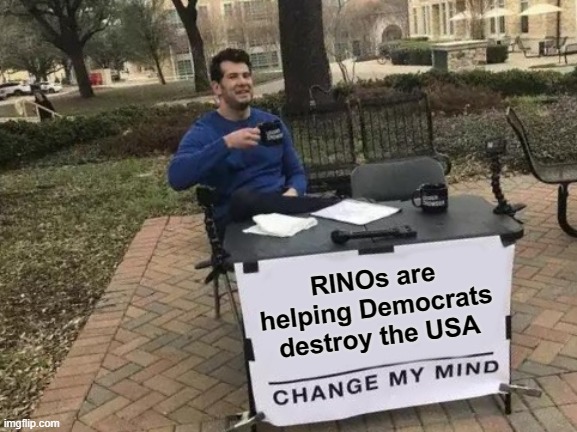 4 posted on 06/21/2022 8:52:41 PM PDT by Major Matt Mason (To solve the Democrat problem, the RINO problem must first be solved.)
[ Post Reply | Private Reply | To 1 | View Replies]
To: RandFan
Capito did not endorse the June framework and when asked about it said she would have to review the details of the legislative text before rendering an opinion on whether she would support or oppose the bill.

She has no principles; never did.

Cornyn should not be allowed back into the state of Texas.
There should be a warrant put out for his arrest and as soon as he sets foot on sovereign Texas soil, he should be immediately be arrested.

Lots of “A” ratings from the NRA in there.

Financial pirate Willard Romney goes out of his way to streak his inner Dem. And...

8 posted on 06/21/2022 8:57:00 PM PDT by Seaplaner (Never give in. Never give in. Never, never, never...in nothing, great or small...Winston Churchill)
[ Post Reply | Private Reply | To 1 | View Replies]
To: RandFan
I suppose it makes sense for linda to be a big supporter of this. Maybe those who voted for him last time will think twice in the future. I don’t think that “A” means what we think it does.

How ironic (idiotic): Everyone of these jokers has an A or A+ rating from the NRA save one, Collins, who got a B.

Most of the usual suspects.

Hawley was on Tucker last night talking about the people of Missouri this and that. While Blunt, his fellow senator, sold them out. Hawley didn’t mention that and I turned it off.

This illustrates that “ratings” and “endorsements”, whether from organizations or other politicians, are completely useless.

Yes, that means I don’t care who your favorite national politician endorsed in my state and local elections.

It’s not a “gun safety bill.” We shouldn’t let anyone get away with calling it that.

I’ve got some nastygrams to write.

They are NO LONGER afraid of whether we vote for them or not BECAUSE the whole damn system is rigged and a HUGE fraud on the American people there are no longer ANYONE standing for the constitution and after the last election it is in our face that if we don’t like it TO DAMN BAD!!!

Cornyn should not be allowed back into the state of Texas.

You got that right