Late last year, popular podcast host Joe Rogan invited onto his show Dr. Robert Malone, a world-class Covid denier and medical quack, who told Rogan’s millions of listeners that public health experts advocating for vaccines today are akin to Nazi’s in the 1930s. Getting vaccinated against a deadly virus was a sign of “mass formation psychosis,” and Malone suggested Biden was leading a hypnotized cult. It was a misinformation-fest that Rogan said at the time he hoped would go viral.

It did. Then the whole thing got banned by YouTube, where the Joe Rogan Experience gets uploaded, for violating the platform’s rules about trafficking in pandemic lies. It was the latest, reckless example of a once-libertarian podcast host with an eclectic past (actor, comedian, “cage-fighting commentator”), hitching his wagon to conservative lies and distortion, as he whips up distrust of the government and science.

As Rogan takes a hard turn to the right, you get the feeling he wants to be the new Rush Limbaugh — the source of GOP misinformation and conspiracies. More than any other daytime talker, it’s Rogan who could fill Limbaugh’s shoes after the GOP host passed away last year.

Like Limbaugh, Rogan preaches to a mostly male audience of roughly 10 million that wallows in victimhood while the host lashes out at imaginary forces trying to keep the White Man down in America. (“Straight white men are not allowed to talk.”) Like Limbaugh, Rogan faces no consequences for peddling ceaseless lies. Spotify, which has exclusive rights to Rogan’s show, refuses to acknowledge the torrent of misinformation that flow from his show, while at the same time pretending Spotify podcast hosts must adhere to company guidelines.

And like Limbaugh who landed a $100 million contract for the endless litany of smears he trafficked in for decades, Rogan last year penned a nine-figure deal.

The podcast host made political headlines in the winter of 2020 when he said he would support Sen. Bernie Sanders (I-VT) in the Democratic primary. Lots of progressives rushed to embrace the host, suggesting he reached an audience outside of the traditional Democratic base, even though Rogan appears to despise the Left.

Since then, Rogan has lurched to the far right, announcing last year he preferred Trump over Biden in the general election.

With the pandemic, the host has become aggressively and arrogantly dishonest. “I believe he’s become more emboldened to push baseless conspiracy theories and right-wing lies over the past year,” Media Matters researcher Alex Paterson recently told The Verge. “Just from listening to him every day, he’s by no means remitting conspiracy theories and false rhetoric on his show. If anything, he’s leaning into it more. He’s a darling of the conservative right in the United States. Joe Rogan has shown really clearly that he will use his podcast to spread conspiracy theories, right-wing lies, [and] racist rhetoric in order to sort of promote himself.”

Rogan gladly plays hosts to chronic GOP liars such as Ben Shapiro and Alex Jones, while remaining a huge supporter of Tucker Carlson.

There’s big money in right-wing hate and conspiracies, and Rogan’s leaning into all of it —“Nancy Pelosi is the head witch” of the Democratic Party — at the same time Limbaugh’s death created a hole in the far-right media landscape. When Rogan endorsed the baseless notion that the Clinton family was somehow connected to the 2016 murder of Seth Rich, a Democratic National Committee staff member, he sounded just like the deceased AM talker. Same with Rogan’s regular anti-trans rhetoric.

The similarities don’t end there. Just as Limbaugh in 2020 claimed Covid was “no worse than the common cold,” Rogan today lies without pause about a public health crisis that has claimed the lives of nearly one million Americans, going as far as claiming “actual microchips” are “being injected into your arm to see if you have COVID-19.” The show has become a cesspool of unhinged anti-vaccine rhetoric.

He endorsed the nonsensical lie that the government was monitoring private citizens’ text messages for anti-vaccine content. He urged young people not to get vaccinated because “exercising” would protect them. He said use of Ivermectin would effectively treat COVID-19, claimed Biden didn’t actually get his vaccine shot live on TV because they’re too dangerous, warned vaccine passports would move the country towards a “dictatorship,” and insisted immigrants crossing the Mexican border were driving a Covid surge.

It’s all indistinguishable from the bile that Limbaugh made his career spreading and amplifying. We’ll never know how many of Limbaugh's loyal, elderly listeners died from the virus, in part because he assured them the infection was essentially harmless. And we’ll never know how many of Rogan’s (younger) listeners got sick or died from Covid because of the host’s nonstop propaganda campaign against a miraculously effective, and free, vaccine.

TOPICS: Business/Economy; Chit/Chat; Reference; Sports
KEYWORDS: joerogan; limbaugh; rogan; rumble; rushlimbaugh; spotify Navigation: use the links below to view more comments.
first 1-20, 21-40, 41-60 next last
Rogan's received a lot of attention lately, chiefly for his interview with Dr. Malone and the attempt by about 270 no-names to get him fired from Spotify.

Contrary to the triggered article author, Rogan is not Limbaugh - he's a libertarian in favor of drug decriminilization, and his comments about Michelle Obama running for President may be a combination of like and analysis. His utterances are more nuanced in some cases and require thought. Some FReepers, candidly, will also join the left in canceling him because he's not 100% red meat.

That said, he is red-pilling millions of Millenials and GenZers, more so than any other person today. AND he's annoying the left at the same time..it's popcorn time.

He lets his guests speak freely and at length (Hannity could take a lesson from him) and let's his listeners make up their mind. He's going to Make Thinking Great Again.

If you want to understand why the left is working overtime to cancel Rogan, here's a small piece of evidence: 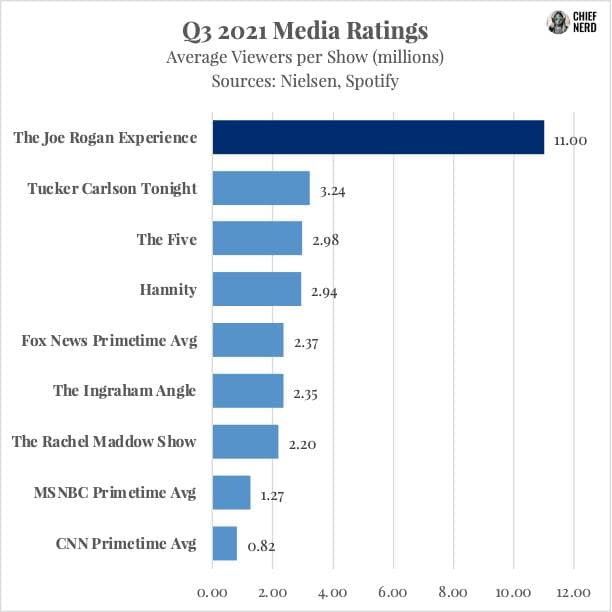 Joe Rogan is no Rush Limbaugh, not even close.

Author is a flat our left wing liar and a clown that really has not done much of anything for a better society.

I stopped reading after the first sentence

I agree with your post almost completely, regarding Hannity, I can’t watch him, he constantly is talking over guests and sets up his question by giving a dissertation before asking it, then talks over the response. My advice to him would be to cut back 50% on him talking and allow his guests to talk 50% more.

The other host that does that a lot is Steve Bannon on the War Room, he constantly interrupts and talks over his guests.

He thinks Big Mike is the Bees Knees.

I confess that I didn’t read the whole article, but it seemed like it was either saying hateful things or quoting others saying hateful things, and was extremely lacking in facts. And Dr. Robert Malone’s professional credentials are beyond question. “Covid denier” and “medical quack” accusations make the author look like a fraud.

Did Malone say that Covid doesn’t exist? That would be the definition of a “covid denier”, right?

His concerns are the long-term effects of the Covid vaccines. It’s a fair concern. Questioning his credentials is insanity.

His standup is lame but his UFC commentary is second to none. All other commenters pale in comparison and events without Joe may as well have the sound off.

Rogan is no Rush Limbaugh nor even remotely conservative in his politics, but he’s steering millions of younger people away from the Democrat Party, and probably turning many of them into independent voters. This guy is a threat to the Democrats so expect an all out assault from them to get him off the air!

Joe Rogan is no Rush Limbaugh, not even close.

Nor is he trying to be. His show format is totally his own. Rogan is not imitating anyone else. It is a unique, and really simple, show format.
* Bring on interesting people.
* Interview them for 3-hours with minimal interruption.
* Engage with the person being interviewed and ask questions.

A problem with that bad analysis, is that Limbaugh's listeners were chiefly aging Americans who listened in via 650 AM channels. Based on this pre-pandemic analysis

According to our survey respondent demos, Joe’s listenership is 71% male and evenly split between high school and post-secondary graduates. Fifty seven percent of his audience reports earning over $50k per year, with 19% making over $100k. The average age of his listeners was 24.

Further, many of Rush's fans will be repelled by Rogan's decriminalization and other positions.

Personally, I understood Limbaugh's appeal and he was good at times. Others were much better than him (Andrew Wikow and the late Irv Homer in Philadelphia come to mind) and Limbaugh wasn't on board with Trump early on (he joined the train when he realized he'd become like Levin and lose a bigly part of his audience by being a NeverTrumper).

And this is Rush.

Whenever the shrill volume is turned up to '11' as demonstrated by this author then you can bet that it's because the left is realizing that it was just nuked by a 20 megaton truth-bomb.

This term really has the left spooked because it horrifically apropos to describing the current situation, and they do not want the curious to look it up and perhaps questioning the poopy pants pied piper's motives.

“Limbaugh wasn’t on board with Trump early on (he joined the train when he realized he’d become like Levin and lose a bigly part of his audience by being a NeverTrumper).”

That is true. He called us “Trumpists” early on. Like most here, Rush started with Cruz and then drifted to Trump. Rush was on the back-end of that movement, but did get there in time to prevent serious damage to his reputation, as he understood that to weaken Trump was to strengthen Hillary, something Cruz (and Levin), our two great ‘Constitutional Scholars’ really struggled to figure out.

What did the left expect when they shut down any views but their own. Rush Limbaugh became popular because he was the only alternative voice available for most Americans.

The left seems to believe that only they have the right to speak and anyone else is to be given a label as an extremist as they attempt to shut them down.

The communist in the Soviet Union could not silence opposition to their one party rule and the left in this nation will not be able to do it either.

Agreed, that is like comparing the IQ of a 6th grade science student to Albert Einstein.