Like a spider eating her mate, we are now watching His Royal Redback get gobbled up alive...

Tell us about Megxit!’

It’s the question I am most asked when I open the floor for questions after giving a speech about Brexit and the state of Britain.

And my answer is a straight one: Meghan Markle has been an absolute disaster for the British monarchy. Like some gangster, she has committed a smash-and-grab on the Palace, snatching what can be easily sold, trashing anything of sentimental value.

Her latest stunt – pocketing an alleged $500K for ratting out her husband’s mental health issues in front of a crowd of deep-pocketed JP Morgan bankers – is proof of what many of us suspected from day one: that she was only ever in this for the publicity and the cash.

Markle saw an opportunity for stardom and she pounced on it, like a black widow spider eating her mate, the male redback, when she is done. In nature the male spider has a taste for sacrificial sex, flipping his bare abdomen into the hungry female’s mouth during mating. So too at the Palace, where the Prince-Formerly-Known-as-Harry has been consumed by the woman he was desperate to be loved by.

Harry was our favorite prince by far. (Although this may not come as a surprise when you consider he has Prince Andrew for competition, a man who makes Harry Weinstein looks like a charmer.)

Naughty little Harry could be relied on to turn up naked in a jacuzzi in Vegas surrounded by beautiful women in a similar state of undress. He flew helicopters for the army and was deployed in combat in Afghanistan. And later in life, Harry became something much more significant to wounded service personnel, for whom he founded and hosted the Invictus Games to give hope and physical ambition to those disabled by war.

But much more than that, Harry is our little boy. The image of the small child following his mother’s coffin through London with his big brother at his side is seared onto the memory of every Brit, and most Americans I know, too. In that moment every parent took that child to their heart and felt relief that his sensible older brother, William, was there to protect him through this cruelty.

Many wonder why a nation of ordinary people cares about this Royal family at all. To an outsider it makes no sense for a family to be afforded immense wealth, privilege and power simply by virtue of birth, living in palaces funded by the taxpayer, turning up only to smile and wave, to open this and show cursory interest in that.

But, you see, they are much more than the sum of these things. They are part of who we are, something reassuringly constant and enduring in times of endless change. Like a cup of tea, or a red bus, or bad teeth, they are intrinsic to our nation. We all grew up with the Royals. They are the reason my family will all be gathered in my front room at 3 p.m. on Christmas Day – because my mother likes us all to listen respectfully to The Queen’s Speech, just as her mother did, and her mother before her.

The Queen is the best of us, dedicating her life "whether it be short or long" to the service of this little island – a promise she has faithfully delivered for 68 years without pause. Whether serving as a mechanic during the war, or smiling through 14 British prime ministers from Churchill to Thatcher, each thinking they are the most important person in the room, she has been unflinching in her commitment to the British people.

Blue-collar Brits like our Royals are traditionally aloof. We want them to be untouchable. We love that the Queen never shares a political opinion and reins in her emotions so tightly, caught laughing only in unguarded moments when watching her horses race. We love that all her outfits match and that she has a special wave not involving the upper arm.

It is from this place that we judge Meghan Markle, with her over-easy relationship with the cameras and a personal history that is more tabloid than traditional princess. Her tawdry early photoshoots reek of desperation; her own father and sister say much the same. When she was trying to be famous she identified as Caucasian; now she says she is the most colored person in the room.

Lecturing Brits on climate change while boarding yet another private jet, preaching to us about kindness while ignoring her own father, taking a seat in the Royal Box at Wimbledon only to berate the public who tried to photograph her there, making a tour of South Africa only to conclude that the woman she felt most sorry for was herself…

None of us is perfect. But it is Meghan’s off-camera, private actions that set off my own alarm system. I have heard from agents to major stars that Meghan was perpetually stalking their talent in the hope of a moment in the spotlight. A source close to the Palace tells of how, for her first date with Prince Harry, Meghan researched, bought and wore the perfume Princess Diana used to wear. Spiders are cunning creatures and this one spun her web well.

When, after an "extended break" in Canada, Meghan and Harry returned to the UK to announce they were "stepping back" from the Royal Family and giving up their Royal titles and duties, many commentators decided this was a "brave" and "modern" move. "Meghan’s blackness defeats the Royal Family’s whiteness," one headline read, as if color were some kind of competition we didn’t even know we were in.

But the truth is far more ordinary. Meghan and Harry had a choice. They could have stepped back from Royal duties when they got engaged, before enjoying the wedding we paid for, which was watched by 1.9 billion people, and before taking the $2.5 million home we funded. But they did not.

Behind the scenes on their extended break they had been busy trademarking the Royal Sussex brand against products and business activities. Meghan spoke out against the President in defiance of the non-partisan protocol of the Royal family, and footage emerged of Prince Harry promoting Meghan for voiceover work to Disney’s CEO at the Premiere of The Lion King. Their shame comes in spade-loads.

For Meghan, marrying into the Royal family appears to have been a launch pad, a tactical move in a far bigger game plan. And decent Brits have every right to feel used.

I could be noble. I could say that I wish her well with her new celebrity life of excess in North America. But I do not. I rue the day Prince Harry fell into her trap and flinch as I watch His Royal Redback get gobbled up alive.

Baloney. She’s a hired hand for their recapture of the US!

Harry could have had a Rolls Royce, or a Ferrari, but instead chose a used up Buick.

She cucked the Prince, and he is so pu$$y whipped, he can’t tell shite from shinola.

The Royal family is an institution, Everyone must know and keep their place, and learn the proper manners.

Meghan Markle just was not up to the task, a hateful person.She lives by image rather than by action, which is why she hated President Trump and his accomplishment and now has turned to hatred of the Royal Family, which will long outlive her very short, self centered life .

No wife is she. She wants fame, fortune and attention, and will do virtually anything to secure it. Motherhood does not seem to suit her.

Harry will soon be toast, discarded after performing his breeder duties.If only he had married a real woman rather than a well disguised Hollywood witch.

If Harry really cared about the image of his family and country, he’d have avoided marrying the leftist American bitch.

>>The Royal family is an institution, Everyone must know and keep their place, and learn the proper manners<< 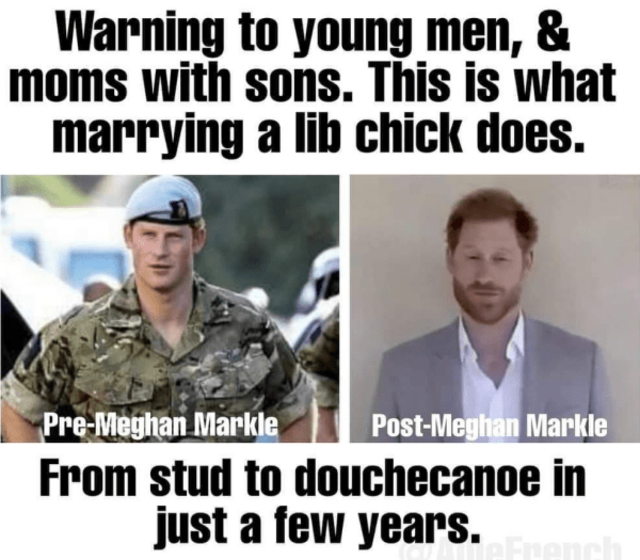 That’s going on all my social media pages.

MM is like Wallis Simpson before her....stripped a royal heir from the monarchy...MM is a high grade narcissist...Harry has rose colored narc glasses on and is blinded to reality...at some point he will be devalued and discarded like a used paper towel...

Harry went from looking like Pat Tillman to just... “Pat.”

Any truth to the rumor that playing the Rolling Stones song “Brown Sugar” within 500 meters of Windsor Castle will now subject you to arrest?

The first time that one kiss turned a Prince into a frog.

So clear, to the point and well-written. I’m rawthuh blown away, my bumbershoot shredded by the gentle force of her words.

The author has a keen eye and understanding of Human nature.

Bravo. I share her opinion of the Black Widow, the Mantis who preys on princes.

She has probably separated Harry from any of his honest friends so that they can't tell him this.