With the Nov. 3 election looming, hundreds of women marched downtown Saturday morning to make their case against electing President Donald Trump for a second term.

“This is the most crucial election of our lifetime,” organizer Gianna Gizzi told a crowd of several hundred who gathered at Federal Plaza in the yearly event meant to empower woman and encourage equality.

“We’re marching for the people here and those who can’t be here,” Gizzi said.

Though this year’s march paled in comparison to the 2017 gathering that drew tens of thousands, the rally also attracted first-timers, including Michele McGowan, who said she came with a friend to let politicians know the will of the people.

“This is something we should be fighting for. Our politicians shouldn’t be choosing our fate — we should,” she said.

Police cordoned the marchers to the sidewalk as they made their way down Dearborn Street to Daley Plaza.

Marchers held signs that said, “Vote for change “ and “I’m doing this now so my future daughter does not have to.”

Elementary school teacher Lillian Puicha told the crowd that electing Trump for a second term would imperil programs like Planned Parenthood and harm a woman’s right to choose an abortion.

“Women, we are at risk of losing so much this election,” said 24-year-old Puicha, of downstate Normal.

“Empowered women empower other women,” she said. “Our bodies are ours — that’s why we’re here.”

Organizers also rallied virtually with a Zoom rally hosted by the Women’s March Chicago chapter, which included an appearance from Mayor Lori Lightfoot. 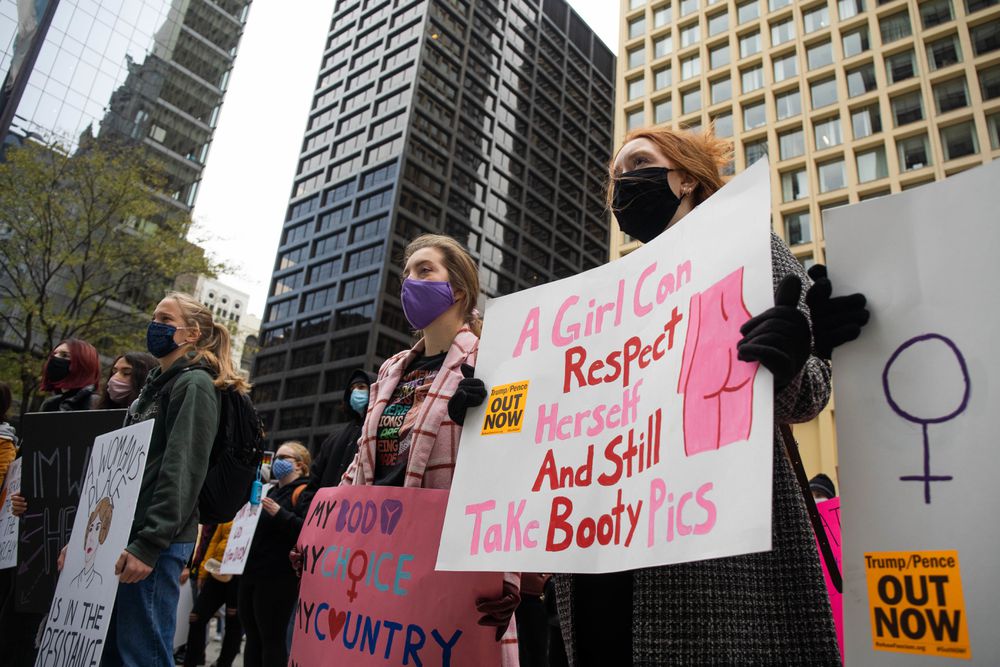 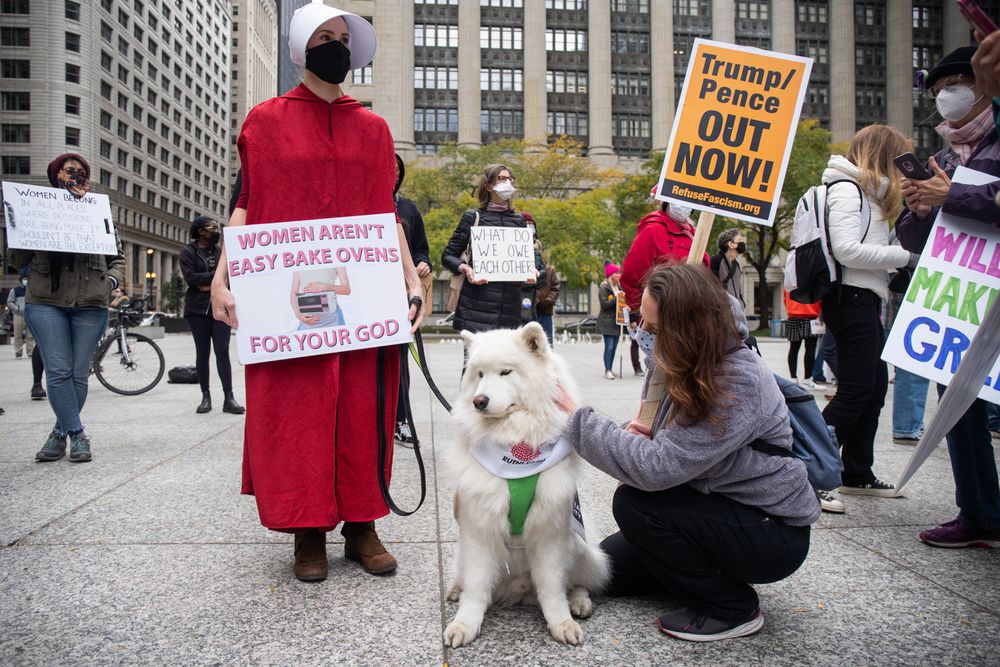 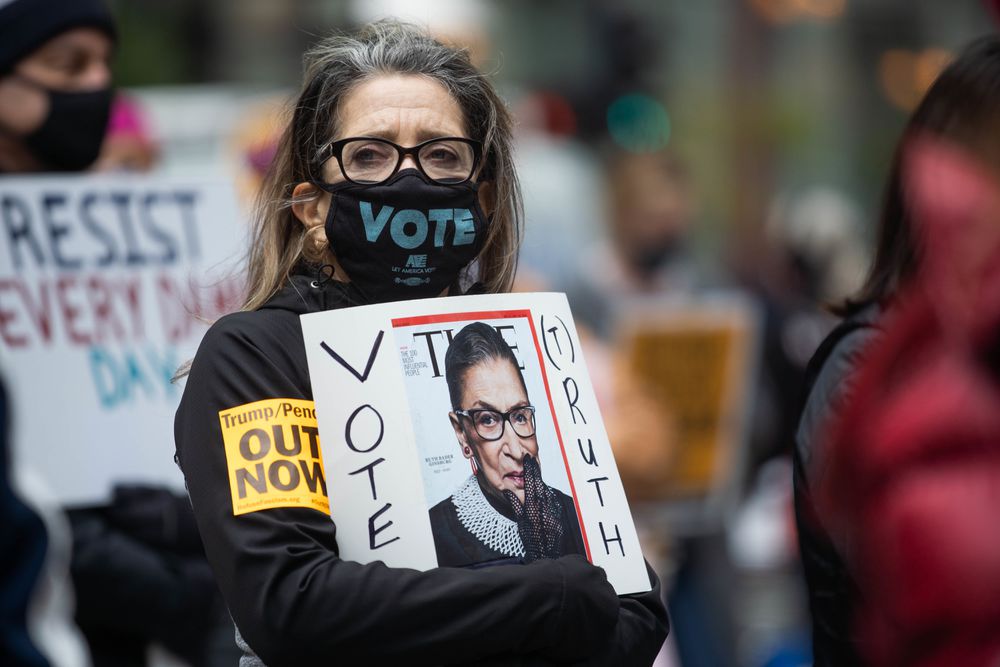 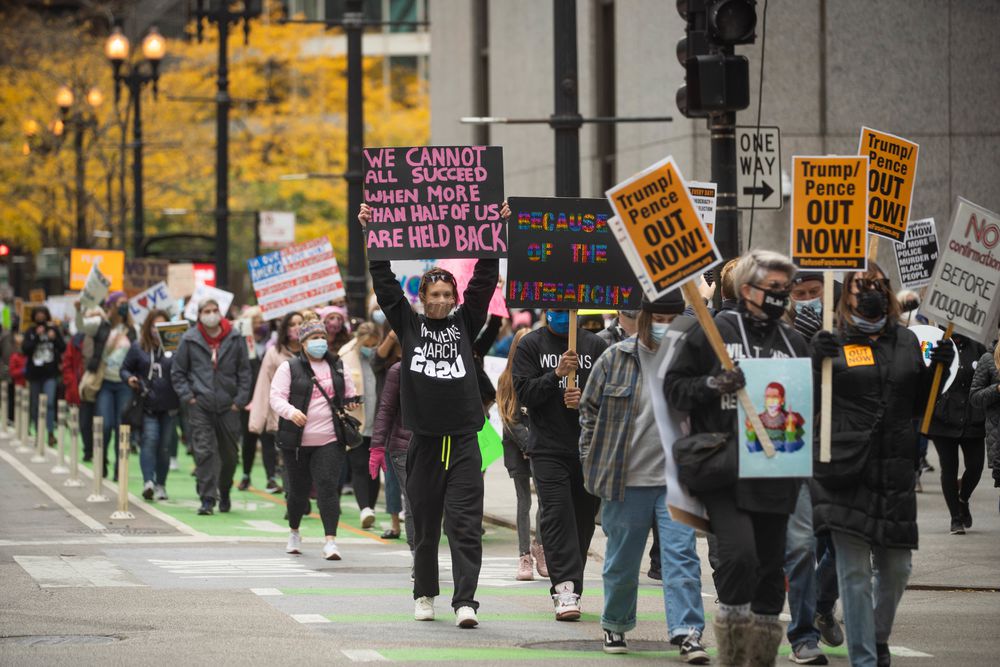 "Gianna primarily represents clients who have been the victims of police brutality and officer misconduct... Before joining Kulis Law, Gianna worked at a nonprofit organization, Equip for Equality, during her first and second years of law school. Specifically, Gianna worked on the nonprofit’s civil rights team, where her passion for advocating on behalf of underrepresented communities grew."

outside of the media there is about 200. so yea I guess “hundreds” qualifies.

“These people are sick!”

It’s a shame y’all missed it

Meanwhile, 20-thousand more people show up for a Trump rally than the venue can hold.

These women are so stupid. Even if Roe is struck down every state in the union allows abortion at some stage of the pregnancy.

It is a state’s issue. What goofballs.

Why are these women so concerned about abortion rights?
Birth control is not expensive. Many states hand out condoms for free. Do these women have no problem killing a live fetus destined to be born as a healthy human being?

Abortion of any fetus which is capable to survive outside of mother’s uterus is pre-meditated murder, period. Late term abortions are murder-1. I can compromise on violent rapes (all rapes are basically violent) and Incest. But no need to kill the fetus at all later on after 1st trimester.

FYI, I do NOT see a single PxxxY hat. -Could it be that even the RAD-FEMs figured out that NOBODY was pleased with their HATE, UTTER NONSENSE & VULGAR TALK??

I don’t think Gianna has to worry about God using her body as an Easy Bake Oven. No man with any amount of self-esteem would have sex with that.

Wasn’t the Women’s March supposed to be in January or February?

And then Harvey Weinstein couldn’t keep his pickle packaged.

And all of those women who’d been wronged by him and the liberal women who’d befriended him FINALLY had to say something because “Trump”.

If that Puritan-y looking woman doesn’t think women are Easy Bake Ovens for God, how does she think she got here?

Do these angry dykes realize that over 25,000,000 girls have been slaughtered in America by abortionists?

The buffoon in the White House just brokered two Middle East Peace Accords, something that 71 years of political intervention and endless war failed to produce.

The buffoon in the White House is the first president that has not engaged us in a foreign war since Eisenhower.

The buffoon in the White House has had the greatest impact on the economy, bringing jobs, and lowering unemployment to the Black and Latino population of ANY other president. Ever.

The buffoon in the White House has exposed the deep, widespread, and long-standing corruption in the FBI, the CIA, the NSA, and the Republican and Democratic parties.

The buffoon in the White House turned NATO around and had them start paying their dues.

The buffoon in the White House neutralized the North Koreans, stopped them from developing a further nuclear capability, sending missiles toward Japan , and threatening the West Coast of the US .

The Buffoon in the White House turned our relationship to the Chinese around, brought hundreds of business back to the US , and revived the economy. Hello.

The buffoon in the White House has accomplished the appointing of two Supreme Court Justices and close to 300 Federal Judges.

The buffoon in the White House lowered your taxes and caused your stock market to move to record levels over 100 times, positively impacting the retirements of tens of millions of citizens.

The buffoon in the White House fast-tracked the development of a COVID Vaccine - it will be available within weeks - we still don't have a vaccine for SARS, Bird Flu, Ebola, or a host of diseases that arose during previous administrations.

The buffoon in the White House rebuilt our military which the Obama administration had crippled and had fired 214 key generals and admirals in his first year of office.

The buffoon in the White House. Works for free and has lost well over 2 billion dollars of his own money in serving - and done all of this and much more in the face of relentless undermining and opposition from people who are threatened because they know they are going to be exposed as the criminals that they are if he is re-elected. I got it, you don't like him. How special of you. He is serving you and ALL the American people. What are you doing besides calling him names?"

“We’re marching for the people here and those who can’t be here,” Gizzi said.”

The people who couldn’t be there are the millions of murdered babies.
I don’t think these demons speak for them.

Not even after she upped her game from 2018.

I had the exact same thought. Thank God for small favors.