Navy SEAL Responds To Trump: I Killed The Real Bin Laden, Not A Body Double, Sir (in response to a tweet that alleges Biden and Obama had Seal Team 6 killed)
Hotair ^ | 10/14/2020 | AllahPundit 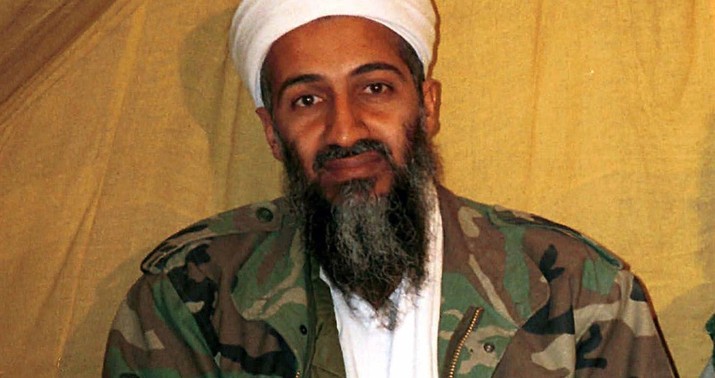 In the year of our lord 2020, the headline above doesn’t even qualify as the strangest one I’ve written this week.

There are two good arguments for Biden declining to hold any further debates with Trump. There’s the obvious one, that it’s foolish to give your opponent a chance to get back in the race when you’re up big. That’s a time to play it safe and run out the clock, not go into gladiator mode.

But the other is less appreciated. As we get closer to Election Day and Trump becomes more desperate for a gamechanger, he’s liable to say a-n-y-t-h-i-n-g to try to jolt the polls. Biden can’t stop him from doing that, of course; the president of the United States has free media available to him at a moment’s notice. But he can certainly deny him a forum to do so that’s apt to draw an audience of 80 million people.

As zany as he’s been since leaving Walter Reed, yesterday felt like the true start of the “say a-n-y-t-h-i-n-g” ending to the campaign.

The president retweeted an insane article alleging "Biden and Obama may have had Seal Team 6 killed" posted by a QAnon account and written by "an ex-Community Organizer and Homeschool Mom." pic.twitter.com/ydoCEFLkAt

Parrot claims that Biden cut a deal with Iran to set up Bin Laden’s 2011 death in Pakistan. But when Iran double-crossed the United States and switched in a Bin Laden body double, in Parrot’s telling, Biden and Clinton arranged for a Navy SEAL helicopter to be shot down to keep the truth about the raid from getting out— a reference to a real-world helicopter attack in Afghanistan that killed 38 people, including 25 Navy SEALs.

“Vice President Biden paid with the blood of Seal Team 6,” Parrot said in the video. “He spent their blood like currency.”

Later in the video, Noe claims that the Benghazi compound was attacked to cover up the fact that, supposedly, the missile used in the helicopter attack came from the United States.

Because we live in a bad television show now, one of the SEALs on the Bin Laden mission — who claims to have fired the fatal shot at OBL himself — was standing by to refute the latest garbage information being shoveled at the public by the commander-in-chief. Even weirder, that SEAL is well-known to MAGA types. It’s Robert O’Neill, who’s been on Fox News many times as a commentator since revealing that he participated in the Bin Laden raid. Trump is spraying so wildly at Biden now that even people who are sympathetic to him are being hit by the crossfire.

It’s true that members of SEAL Team 6 died tragically in a helicopter crash not long after the Bin Laden mission, but the particular soldiers who perished weren’t part of that operation, says O’Neill. And needless to say, it was the real Bin Laden who was killed, not an incredible facsimile.

Very brave men said goodby to their kids to go kill Osama bin Laden. We were given the order by President Obama. It was not a body double. Thank you Mr. President. Happy birthday @USNavy

Shit. I just found out that I killed Osama bin Johnson. Drinks are on me, I guess…

I know who I killed, homie. Every time. https://t.co/sGuf6ZMskw

Every SEAL from the UBL Mission is alive while you are reading this. https://t.co/6mvAh37Cep

The most newsworthy aspect of this episode is that it … wasn’t considered very newsworthy by major media. Even granting that it’s an unusually busy time between the election, COVID, the Barrett hearing, and the stimulus standoff, it’s not every day that the president casually endorses a theory that his opponent had American soldiers mass-murdered and then had several more Americans murdered, including an ambassador, to cover up the previous murders. Yet it barely registered anywhere. How come?

Because we expect it, of course. Trump tweeting conspiracy theories about the Bin Laden raid would have been headline news in 2016, when there was a still question of how he might behave in office if handed the presidency. In 2020, that’s called “Tuesday.” The cynical read on Americans shrugging at tweets like yesterday’s is that they’re now so inured to the head of state sounding like a YouTube crank that they no longer hold it against him or expect better. The more idealistic view, though, is that they’ve already resolved to toss him out next month precisely because there’s been far too much nonsense like this over the past four years and are now just patiently indulging him as they prepare for his departure.

“Honestly, all the moms I know, we are really nervous about our kids, what kind of future they’re going to have. And Trump is the one making us nervous,” Jessica Morschakov, a 38-year-old ballet studio owner, told me in the wealthy, ultra-conservative township of Brighton. “He’s just so angry all the time. I really believe that he brings out the worst in people, the worst in situations.”

It’s this sentiment, from this voting demographic, that’s echoing all across Michigan — especially in its rich white suburbs. Even voters who describe themselves as single-issue, pro-life Republicans, such as Karen Kudla, have said they’ve given up on Trump. “I cannot in good conscience vote to keep this man in the White House,” Kudla told me in Lake Orion.

It’s like having an erratic tenant whom you’re in the process of evicting. There’s going to be a certain amount of ranting and raving as the cops tell him it’s time to go. The easiest thing for everyone involved is to just let him yell while he’s packing up. Don’t make it worse by antagonizing him or challenging him on the nutty things he says. He is who he is. He’ll be gone soon. Take the path of least resistance.

What I’m really interested in seeing is whether the “say anything” finale to his campaign ultimately leads him into full-throated support for QAnon before November 3. He’s spoken warmly of Q-bots publicly but he hasn’t “confirmed” any of the particulars of the Q mythology. If he did, that *would* get media attention just because of how many members of that particular cult there are. It would do Trump no good electorally and plenty of harm if he took to flirting with QAnon, but as we saw yesterday with his needless spat with Fauci, he’s not thinking strategically, he’s simply reacting to things impulsively. If he feels the race slipping away, he might impulsively seek the embrace of a group that already treats him as a sort of messiah ridding the world of Satanic evil. We’ll see. Twenty days to go.

I’ll leave you with this. Loeffler’s not a crank, but she’s willing to pander to cranks for her own electoral ends. The party has a bright future.

Why is he responding to Trump, Trump never alleged that?

Because someone claims that Trump RETWEETED the article: 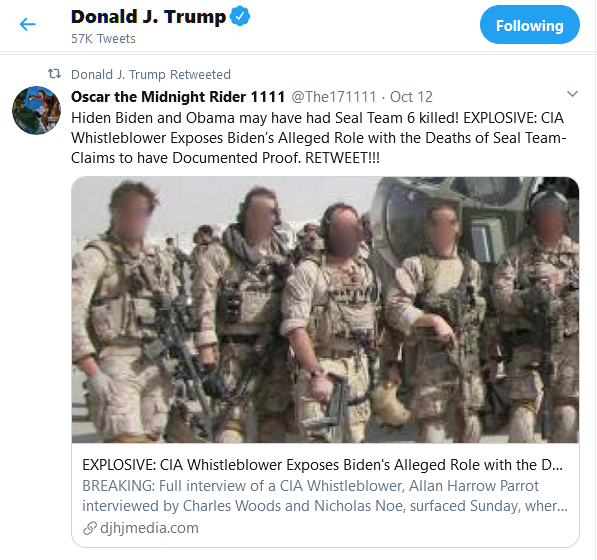 He is probably a bit shaky on his identification of OBL. He doesn’t know for sure whether it was BL he killed. He shot somebody that looked like a picture but that is all he knows. By hastily disposing of the body it is impossible for anyone outside of the medicals on board the ship who examined the body if the identification is correct, if the body was, indeed, examined. Whenever the body of the victim is disposed of so finally and hastily, I suspect strongly that there is chicanery afoot. For some reason it was deemed undesirable that there should be a positive ID of that body by uninvolved examiners.

I figured this was coming. Wonder if we’ll ever know the truth?

I was hoping Trump would not Tweet or Re-Tweet about this. Worst time to do it. Less than three weeks before election, and he does this? Just idiotic.

The laddie doth protest too much, methinks.

The story is, a CIA analyst did the ID of the deceased.

He’s his own worst enemy. He can’t help himself.

Trump may not have retweeted this, BUT there are still many glaring questions about that date that have never been fully answered. First question: Was that even OBL who was killed by the Seals? Separate question: Whose lifeless body was conveniently ‘Buried at Sea’ in the dark of night? Or was that simply a weighted coffin?

Why were there no pictures at all of “OBL”?
Why was security for that helicopter full of Seals so flawed?
Flawed enough for the entire aircraft to explode in flames.
Somebody found out exactly where those Seals were.

That’s what I was asking as I read it. Trump never said what O’Neill was saying he said.

I can imagine some fake news idiot told O’Neill that Trump said it and then took O’Neill’s response.

14 posted on 10/14/2020 7:58:20 PM PDT by Hostage (Article V)
[ Post Reply | Private Reply | To 2 | View Replies]
To: SeekAndFind
Everytime I've seen O'Neill, he has been a serious pompous dick. You may have wasted him, but where is the proof? This is the closest the White House ever released claiming they killed him

I've seen dead Che', Dead Mussollini, and dead Chauchesku. Why not show the dead Osama and put it to rest?

And this took place conveniently right after he released his photoshopped birth certificate that was being proven to be full of layers by graphics professionals.

Oh please...They had his DNA and certainly many additional kinds of identification.

Yeah sure sport. That’s why the American people never got a look at his body and it was quickly dumped into the ocean with no photos.

Mussolini, Hitler, Khaddafy, Saddam, Saddam’s sons, JFK, Al Baghdadi, etc etc... we got to see. But Osama, no dice. Sure, we believe you. /s

Somebody cover me. I'm going in.

I've always been just a liiiiiitle uncomfortable with the loose lippiness and self-aggrandizement of that guy talking about his involvement with a military outfit that shrouds itself in and prides itself on secrecy.