Republican lawmakers assailed Gov. Tom Wolf’s new restrictions on bars, restaurants and other businesses, saying they will kill some small businesses struggling to survive during the coronavirus pandemic.

Citing a spike in COVID-19 cases, Wolf announced a new executive order limiting bars and restaurants to 25-percent of occupancy limits - down from 50 percent. And he said restaurants and bars could only serve alcohol with meals or for takeout. Clubs and bars that don’t serve food won’t be allowed to open.

The governor also is directing businesses to allow employees to work remotely if all possible, unless work can only be done onsite. Wolf said the measures are necessary to try and avoid the surge seen in the spring and to ensure schools can open for in-person classes next month.

GOP lawmakers, who control both chambers of the General Assembly, denounced the Democratic governor and said he’s acting without consulting the legislative branch. They also said his actions could wipe out small businesses.

“The irreversible impact of his countless, confusing orders cannot be overstated,” Benninghoff said in a statement. “Gov. Wolf’s decision today will close the doors of some small businesses forever and devastate the livelihoods of so many Pennsylvanians who were just beginning to feel hopeful for the future.”

Sens. Ryan P. Aument and Scott Martin, both Lancaster County Republicans, issued a joint statement faulting the governor’s approach. Saying hospitalizations and infections have declined in Lancaster County, they said the governor should be focusing on the regions where cases are spiking instead of issuing statewide restrictions.

“Make no mistake, this will be the final blow for countless businesses in the hospitality industry, a hit from which they will not recover,” Aument and Martin said in their statement. “It will cause irreparable harm and permanently hamstring the communities these businesses serve.”

Pennsylvania has slowed the rate of infections since the early spring but cases have been rising in recent weeks. The state Department of Health reported 994 new COVID-19 cases Wednesday. The state has reported an average of 788 new daily infections over the last seven days. In mid-June, the state reported less than 500 cases per day, on average.

More than 97,000 people in Pennsylvania have contracted the coronavirus and more than 6,900 deaths have been tied to COVID-19, according to the state Department of Health.

State of coronavirus in Pennsylvania: Where do the counties rank?

Republican lawmakers said they want to protect public health but also ensure more businesses don’t fail. More than 2 million Pennsylvanians have lost their jobs during the pandemic, according to state figures.

State Sen. David Argall, a Schuylkill County Republican who represents part of Berks County, said Wolf is acting like “King Tom the First,” without the approval of lawmakers.

“The Governor doesn’t understand rural Pennsylvania,” Argall wrote on Facebook. “We heard it firsthand during my four Policy Committee hearings in the last few weeks: Rising numbers of COVID 19 cases in Pittsburgh and Philadelphia do not mean the Governor should hurt restaurant and bar employees in Sinking Spring, Womelsdorf and Shenandoah.”

The new rules “could be the final stake in the heart for many small business employers and thousands of employees in the small towns which I represent,” Argall said.

Gene Barr, president and CEO of the Pennsylvania Chamber of Business and Industry, issued a statement expressing his frustration that statewide measures are coming in response to localized outbreaks. He said businesses now must struggle to comply “with an order that has been handed down without notice, and which leaves them with more questions than they have answers.”

“We all want to control the spread of the virus while balancing the needs of Pennsylvanians to live productive lives,” Barr said in a statement. “Unfortunately, today’s order is a major setback in our collective efforts to bring Pennsylvania back.”

What do the colors mean? 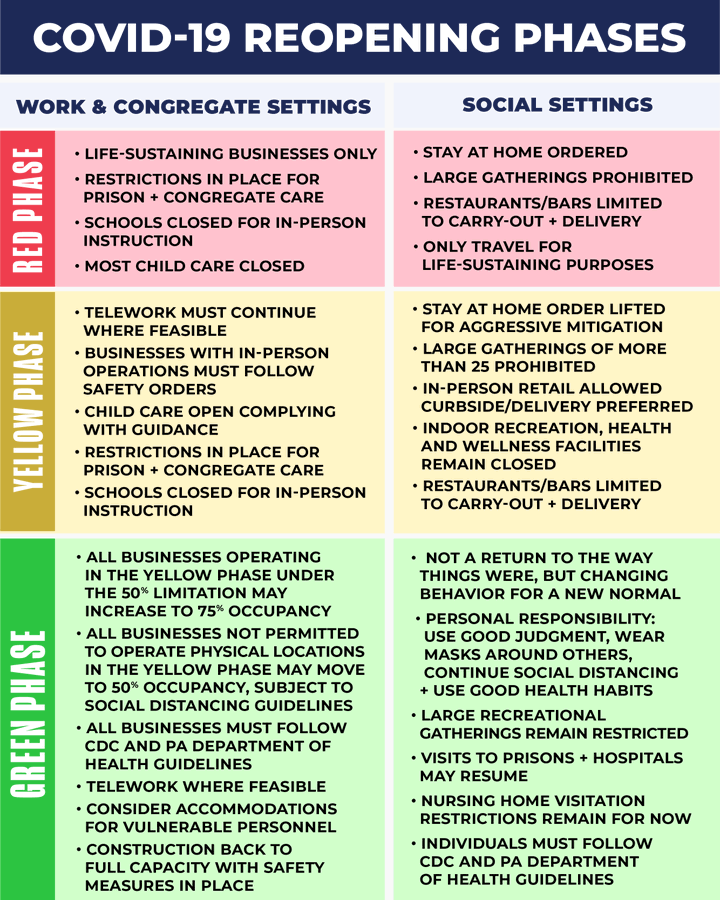 Question to Dem governors: More restrictions again. Governor, when will it end?

Answer: The day after Trump loses in November.

I heard these dirty Communist bastards on the radio today. I wish everyone would simply RESIST, but there are too many sheeple in PA.

Ask your friends and family if they like living in Pa. under the lockdown.

If they say no, ask them if they voted Demoncrat the last election.

Ask them if they are going to vote Demoncrat this fall.

We are close to Ohio. If I want to eat out I will probably just jump the boarder.

Still not good for Pa business.

Unfortunately, and as usual, Pittsburgh and Philadelphia are Demorat strongholds.... Wolf never looks further than those two cities.

And I wrote a stern letter to The Times. That’ll show ‘em.

Dem Govs all need to be tarred and feathered and then thrown into prison.

I prefer the 1618 Third Defenestration of Prague approach.

Why penalize the whole state because Tom Wold killed a bunch of seniors in nursing homes. They vote Republican so he doesn’t care.

‘I wish everyone would simply RESIST, but there are too many sheeple in PA.’

you could make a million high quality sweaters with the wool sheared from these damned cowards...fat lot of good having spineless republicans controlling the state assembly...

Well, at least they’re protesting and making themselves heard. Other places are accepting these restrictions without a complaint from the politicians...just from the business owners, who have already struggled to come back once and probably aren’t going to make it the second time around. But nobody cares about them.

doubt it; lots of people are good with all this crap...

The only problem is finding a manure pile

Hopefully , the pathetic anti-Free-America leftist malignancies are digging their own graves.

Bars and restaurants can’t just turn liquor liability insurance, which is quite expensive, on and off like putting a vehicle into storage.