Leo Terrell is furious at fellow Dems over riots: I’m a black voter and you have lost me if you don’t stand up to these criminals
bizpacreview ^

American civil rights attorney Leo Terrell called out Democrats who have not stepped up to publicly condemn crime in the wake of protests against the death of George Floyd.

The radio talk show host told Fox News’ Sean Hannity on Friday that so-called protesters are using the death of the Minneapolis man this week while under police custody as an excuse to go on crime sprees in American cities. And Democrats, fearful of losing the black vote in November, are staying silent.

“This is a tragedy,” Terrell said on “Hannity” Friday.

“There is universal acceptance that the murder of George Floyd was wrong. We agree with that,” he said, referring to the 46-year-old unarmed black man who was seen in a shocking video before he died as a white police officer pressed his knee against his neck. “I am disappointed, shocked that there has been no Democratic lawmaker in the last 72 hours who have focused on the criminal activities of these individuals who are not protesting,” he added.

“These are criminals and they are breaking the law using the guise of caring about George Floyd,” Terrell contended. “And, I encourage all you Democratic lawmakers, all you lawmakers, to stand up and criticize these criminals.”

Protests erupted earlier this week after a now-viral video showed the scene as Floyd called out to now-former officer Derek Chauvin, who was seen kneeling on Floyd’s neck for over eight minutes, that he could not breathe. The victim soon became unresponsive and was later pronounced dead. The four officers involved were fired the next day and Chauvin was arrested Friday.

But the cries against systemic racial injustice sparked heated demonstrations in Minneapolis that soon turned violent as opportunists blurred the message with widespread looting and arson. Multiple media reports seemed to confirm that police and even the National Guard seemed visibly absent as portions of the city were destroyed over several nights of protests.

Soon the demonstrations and marches began to emerge in other cities like New York and Atlanta. More than 170 businesses have been damaged or looted, according to police in St. Paul, Minn.

“I have tremendous credibility as a civil rights attorney. I agree with Sean Hannity. I thank the president for spending prompt action of getting the attorney general involved in this and the county district attorney for filing charges,” Terrell continued in speaking with Hannity.

“But, what cannot happen is this Democratic silence,” he added.”And, let me just tell the truth why: because these Democratic lawmakers do not want to alienate black voters.”

But Terrell had a message for Democrats.

“I’ve got news for you: you’re alienating me,” he said. “I’m a black voter and you have lost me if you don’t stand up and do something about these criminals.”

Former President Obama issued a statement about the unrest, urging Americans to “work together to create a new normal in which the legacy of bigotry and unequal treatment no longer infects our institutions or our hearts.” He did not, however, condemn the rioting and violence.

His former vice president and current 2020 Democratic candidate Joe Biden gave a speech on Friday in which he called for “justice for George Floyd” while also bashing the White House response. While he addressed the need for police reforms and racial reconciliation, Biden conspicuously said nothing of the violence.

Trump, meanwhile, called Floyd’s death “very sad and tragic” and asked the F.B.I. and Justice Department to investigate it.

“I understand the hurt. I understand the pain,” Trump said at a round table discussion with executives on Friday and also criticized the looters. He came under fire earlier from his critics who took issue with him calling out the rioters as “thugs.”

Twitter users seemed to not be surprised with Terrell’s view on why Democrats have not spoken out about the violence.

Don’t worry… I’m sure @JoeBiden will save us. He did nothing for 48 years… but here he comes!!

Finally!!! So proud of Leo for standing up to the Left’s garbage.

#LeoTerrell is SPOT on. Another way to say what he is saying? @DNC & every liberal lunatic is USELESS!

that was great & he was legit pissed off 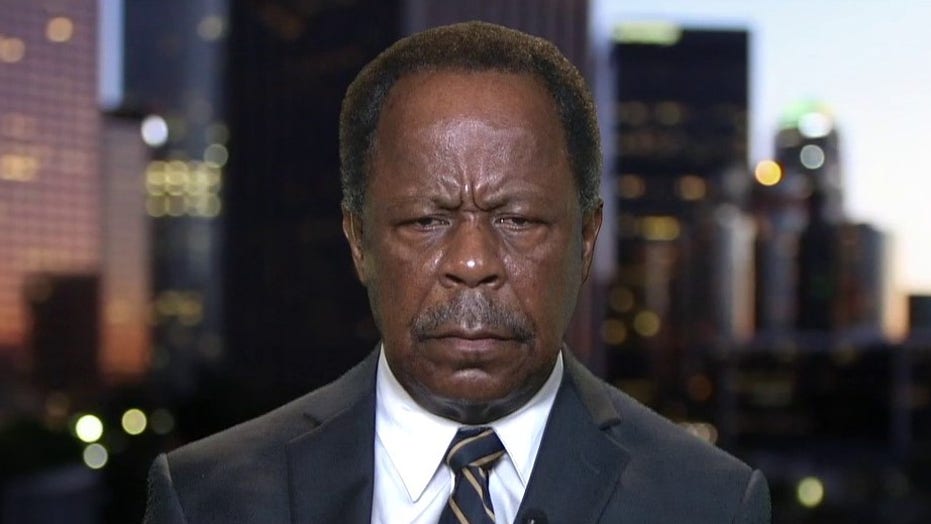 And God bless this man.

Hopefully the backlash against the Democrats begins in earnest. Nobody with common sense thinks this is the work of White supremacists!

If Leo Terrell is saying this, the Democrats better listen. I am shocked by his words. Never would have thought he would be a voice of reason in a time like this.

Cry me a river Terrell. This angry, race baiting puke has helped to foster this attitude in blacks for years.

6 posted on 05/30/2020 9:18:23 PM PDT by jmacusa (If we're all equal how is diversity our strength?)
[ Post Reply | Private Reply | To 2 | View Replies]
To: Conserv
“I am disappointed, shocked that there has been no Democratic lawmaker in the last 72 hours who have focused on the criminal activities of these individuals who are not protesting,”

Why would the RATs complain? ANTIFA is the militant wing of the RAT party. It would be attacking the very people they sent out to try and discredit the President. The talking point from day one is that the Trump White House is incompetent and chaotic.

Oh oh, now you did it Leo. They’ll be calling you an Uncle Tom, and tell you you’re not black enough.

He realizes attitudes have evolved and the citizens understand the differences between “protestors” and “rioters.”

Media should recognize the same.

Leo Terrell’s a liberal but he’s honest and holds both sides to the same standards.

The reason democrats aren’t condemning the criminals is they think all blacks are criminals. And they’re wrong. Lots of black citizens are fairly conservative. The biggest problem with the black community is too many of their self appointed ‘leaders’ ARE liberal thugs.

I rarely agree with Leo (like never). I am glad to hear him say this. I have wondered where the dem leadership voices have been. Apparently I’m not the only one

Very important. Arrests should lead to charges of a felony, and plea bargain them to a lesser felony that gives them probation, but . . . and this is the key, they must plead guilty to that lesser felony.

Instantly they are off the voter lists.

Like all the law-abiding Muslims after a terrorist attack: Mostly silence and when the few do condemn, there are a lot of “buts.”

Everything makes sense when one realizes Islam is a war plan.

One big thing that has changed since the Rodney King riots is that Hispanics have surpassed blacks as the largest minority group in the U.S. I’m sure a lot of these “civil rights leaders” see these black neighborhoods going up in flames and realize that they will only be rebuilt after the current residents have been displaced by Mexicans and Asians.

Very much so. This is the chicken's coming home to roost for Leo.