FWIW, Ezra has now scored a Wikipedia entry, which I don’t believe had been available before.

The wikipedia page confirms that Ezra IS WITH BARR! I did not know that for sure in the precious, 2nd posting of this material.

It is also interesting that his picture remains rare. Wikipedia does not post one on his page.

Here is another little bit of info from the wiki page:

We can only imagine what he witnessed/found out. He not only reportedly has the goods on the early spying on Trump, but also it appears it is imaginable that he may even have an assortment of goods and goodies on the Clintons! I realize I’m leaping here, but tell me honestly if you don’t think this is not in the realm of the possible!

“…It is alleged that Cohen-Watnick inadvertently identified reports suggesting that members of Trump’s campaign team had been subjected to incidental surveillance by the United States intelligence community, as part of an unrelated review of privacy procedures. This information was passed on to Chairman of the United States House Permanent Select Committee on Intelligence Devin Nunes by Assistant White House Counsel Michael Ellis. IN APRIL 2017 THE ASSOCIATED PRESS QUOTED A U.S. OFFICIAL AS SAYING THAT ALTHOUGH COHEN-WATNICK HAD ACCESS TO THOSE KINDS OF INTELLIGENCE MATERIALS, HE DID NOT PLAY A ROLE IN HELPING NUNES GAIN ACCESS TO THE DOCUMENTS. According to a U.S. official, Cohen-Watnick was not involved in showing the material to Nunes, did not clear Nunes onto the White House grounds, did not review the material with Nunes, and was not even aware that the material was going to be shared with Chairman Nunes….”

[[Interesting - so did he or did he not help Nunes with learning about certain info? I’m going with Q (from Part 6) and saying he did. But now I’m wondering why they are quoting a source saying he didn’t. ]]

“…His wife worked for Ketchum Inc., where as an intern she did public relations work for the Russian government....”

[[So what? She worked for PR….for the Russians….AS AN INTERN!!!! - who of course very likely had all kinds of autonomous ability to pick and choose the assignment she was given - NOT!

The DERPS are trying everything to keep RUSSIA! RUSSIA! RUSSIA !!! alive, aren’t they? I suspect they know, just as we do from Q, that her husband is VERY important… and they are trying to besmirch him and his wife any possible way they can to get out I’m front of what he can possibly reveal publicly about them. JMHO.]]

I found another link having some good summary info on him:

“…One official also told the Post that Cohen-Watnick is a hawk when it comes to Iran. He is “very big on how we can get more aggressive against Iran, and very dismissive that [Tehran] might escalate… Ezra is really a big fan of covert-y action stuff,” the official told the Post. The Post also reports that Cohen-Watnick doesn’t agree with CIA assessments that economic and diplomatic pressure is the way to go in Iran policy….”

[[I’m wondering if we actually are to believe this about his hawkishness. If he is good friends with Jared and Ivanka... and with POTUS, I am having trouble thinking he is an outright Hawk. But I could be completely in error here. ]]

Like Kushner, Cohen-Watnick is Jewish. His marriage to Rebecca Miller was listed on a newsletter from Ohr Kodesh Congregation, a Conservative synagogue located just outside Washington, D.C.…”

[[“OHR???” Hebrew word? Name of a family who sponsored the synagogue? If a family name, is there some connection to another Ohr who figures in our Q researches and story? Bruce Ohr is from California, middle name is Genesoke. It doesn’t seem likely that he has any ties to whoever/whatever the Ohr is in regards to that synagogue. What an interesting coincidence to run into that name in this context. ]]

“…Voter Records.com lists Cohen-Watnick as registered to vote in Florida as a member of the Republican Party….”

We definitely gotta watch out for news on Ezra Cohen-Watnick!]]

End of ADDENDUM[[S]] and this round of posts/commentary on Ezra Cohen-Watnick.

There was one drop about Manafort that really got my attention with “plants need water”.

I don’t know why and I wouldn’t know where to start trying to figure out what water means in that drop.

“Silence against evil is consent.”

I did stop being politely silent long ago, but this technique is one that can always be used.

At the very least we are definitely GMTA! LOL!

But I’m beginning to think we are getting to be in the Hive Mind!

He is advocate of regime change there.

Thank you for that insight! That makes a lot of sense to me!

LOL! Not everyone will get that one, but we had 5 kids.

These people are stupid.
Enjoy the show!
Q 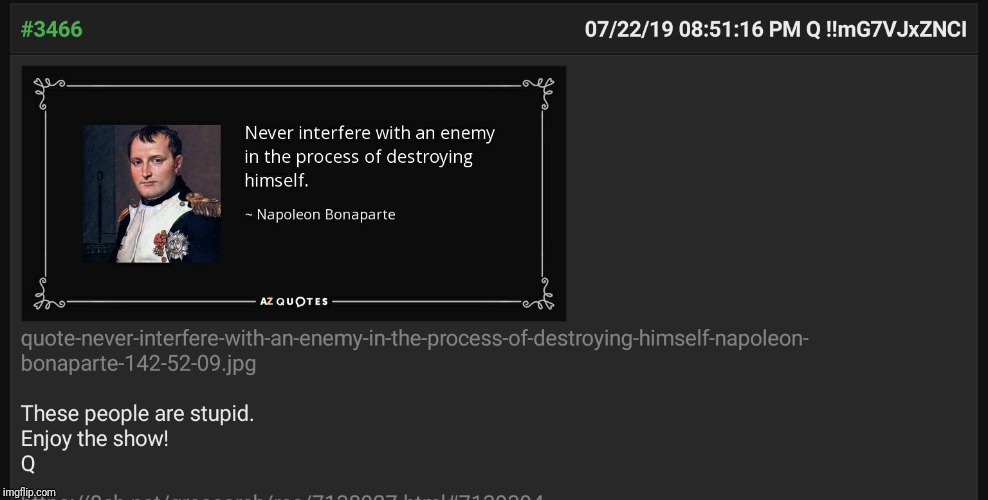 There was one drop about Manafort that really got my attention with “plants need water”.

Probably not right, but I thought it might mean money...if someone was planted in the campaign, they would probably be paid, so follow the money...?

Or it could refer to waterboarding.

From the Office of the Deputy AG to Robert Mueller, regarding upcoming testimony this week.

I believe you are correct, lj. That is my understanding too. 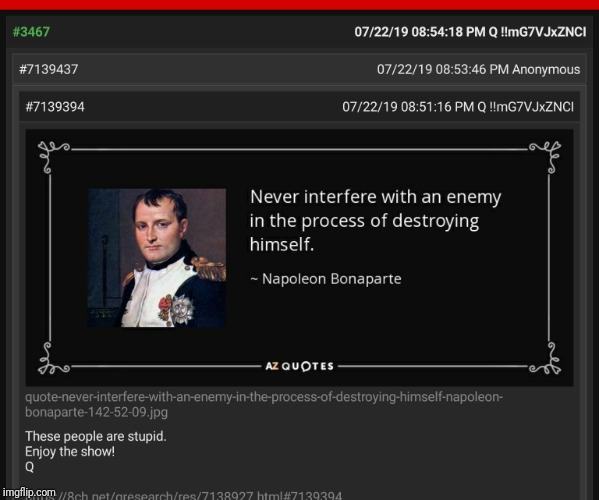 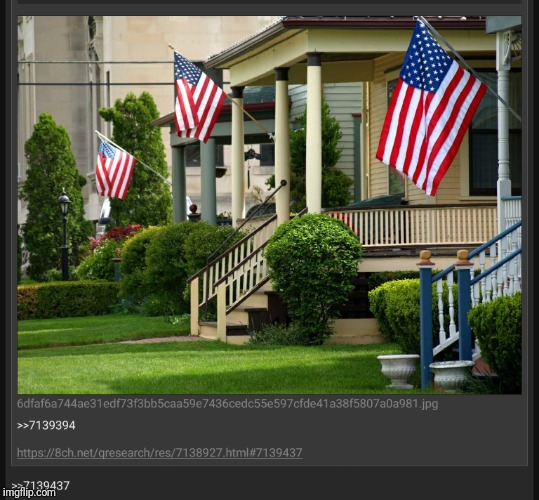 I thought of waterboarding too but didn’t want to say it.

LOL! There is so much to keep straight! I have a hard time remembering if his name is Ezra Watnik-Cohen, or Ezra Cohen-Watnik. Your citing of “ECW” has helped me lock that into place!...but I have it written incorrectly in several places in the series. *sigh*

On it, and thanks for the tutorial links very much!

Thanx for the heads up.

Time is tight for me to dig into a lotta these vids out there, but I think shipp is fo real

PS. I did save the link & will check in.

That is an excellent point!