Column: #MeToo is not a joke and Biden is accountable
Huntington News ^ | April 10, 2019 | Brittany Mendez, columnist

In light of Justice Brett Kavanaugh’s appointment to the highest court in this country, Dr. Christine Blasey Ford’s allegations and others’ must be taken seriously — their stories do have influence. Thus, it is even more important we evaluate what is defined as sexual violence.

On March 29, Lucy Flores published an article describing her encounter with Biden: “He proceeded to plant a big slow kiss on the back of my head.” In response to Flores’ piece, Tarana Burke, the founder of the #MeToo movement, tweeted that his actions were “disrespectful and inexcusable,” emphasizing that Flores’ experience was worth bringing forward — just as I believe Ford’s was. I completely agree with Burke, but it is important to make a distinction between Biden’s actions and acts of sexual violence.

According to the Center for Disease Control and Prevention, sexual violence “is sexual activity when consent is not obtained or not freely given.” As Amy Lappos, the second woman who came forward, pointed out in her experience, “It wasn’t sexual, but he did grab me by the head.”

In her testimony during Kavanaugh’s hearings, Ford claimed, “He began running his hands over my body and grinding his hips into me … Brett groped me and tried to take off my clothes … I believed he was going to rape me.” Ford’s graphic recollection describes an act of sexual violence that should be treated as such.

The homepage of the #MeToo website displays the tagline: “Support survivors and end sexual violence.” Both Biden’s and Kavanaugh’s actions merit the criticism any other predator receives in the #MeToo era, regardless of political affiliation. But what Biden is accused of should not be categorized as sexual violence, as that undermines the experiences of sexual violence survivors.

Translation: We at Huffpo demand a woman President!!!

#MeToo has weaponized and turned on it’s creators.

# = Pound. Why would Biden support a group that would Pound Women?

Whoops, I misread. It was not from Huffpo but might as well be written by those hags...

I got the perfect campaign song for Biden.

I think #metoo is a joke, but opinions certainly vary. Heck, I’ve talked to people recently that actually BELIEVE that Kavanaugh was running a sex slave ring at the college.

And for AOC, what else but “If I only had a brain”

I could while away the hours
Conferrin’ with the flowers,
Consulting with the rain;
And my head I’d be a scratchin’
While my thoughts are busy hatchin’
If I only had a brain. 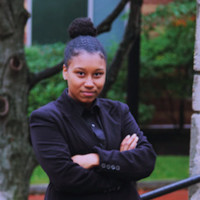 Brittany Mendez, You are a fake news journalist.

So they are conspiracy theorists then?

That’s what we are told about allegations of sex trafficking by the Left.

There I fixed it.

Oh boy, he looks like he has all sorts of natural girl powre smrts!

“Column: #MeToo is not a joke and Biden is accountable”

Why only just NOW, Brittany?

If I had one question to ask Brittany it would be:

If she came back with all women are to be believed, I would respond with All women should be heard, the evidence is what should be believed.

So much bull flop. The dhimmicrats are the biggest sexual exploiters on the planet and then decided to invent then use the ‘ #(pound) me too’ movement to get their Marxist agenda put forth. It is backfiring on them big time.

Biden is a touchy creepy guy….like so many politicians . I love watching the leftists melt down and attack each other.

But we are human beings. Men still chase women. Woman still present themselves in a way that suggests they want to be chased. The game is afoot since the dawn of time

The communist scum are trying to put a wrench in the spokes and are flipping themselves off the bike and landing on their own heads.

I once sat on an ethics board for a large Realtor association with thousands of members. We judged and punished people who were found to have used unethical business practices. I thought the punishments being handed out were too lenient and asked the attorney who represented the board about that.

He said, “We aren’t focused on punishment, we are focused on changing behavior. It’s very rare to see people show up with a second offense, which means we are having our desired effect.”

With that idea in mind, is #Metoo about punishment, revenge or changing behavior, or all three?