When the Hubble Space Telescope took a photo of distant galaxy cluster SDSS J0146-0929, it was able to capture an immensely massive blanket of hundreds of galaxies caught in each other's gravitational pulls.

In the photo, they look no more than inconsequential space dust: tiny, motionless, and remote.

But in fact, the combined mass of these galaxies is so great that it causes a distortion in the fabric of space and time. That is represented by a glowing ring in the center of the image, which is actually a phenomenon called gravitational lensing. The circle of light, called the "Einstein ring," occurs when light from a background galaxy is diverted and distorted around the massive intervening cluster, which makes it seem that a galaxy is in multiple places at once.

Like the many enigmatic occurrences in our universe, gravitational lensing sounds complicated, but it's actually pretty simple to explain. What happens is that when light passes through a dense object with a massive gravitational pull, that object is able to distort the path of light. Because the light is forced to take a path other than a straight line, it circles around the galaxy as it's influenced by massive gravitational forces, creating the Einstein ring seen in the photo above.

"The mass of this galaxy cluster is large enough to severely distort the spacetime around it, creating the odd, looping curves that almost encircle the cluster," reads the Hubble Telescope's press accompanying post.

Bear in mind that the galaxy pictured above isn't really in multiple places at one — it just seems that way because of the light being altered and distorted by massive forces. As such, the Einstein ring looks somewhat like a ring with multiple copies of a galaxy around it.

Gravitational lensing can also sometimes magnify faraway objects in the universe, letting scientists and astronomers get more up-close views at space phenomena such as stars and galaxies, especially the more distant ones.

Gravitational lensing is rooted in Einstein's Theory of General Relativity, hence why the resulting light effect is named after him.

"Hubble's sensitivity and high resolution allow it to see faint and distant gravitational lenses that cannot be detected with ground-based telescopes whose images are blurred by the Earth's atmosphere," according to the Hubble Space Telescope's website. "The gravitational lensing results in multiple images of the original galaxy each with a characteristically distorted banana-like shape or even into rings."

Well now, calling it an “Einstein” certainly gives it a ring of authority. The implications are astronomical.

distortion in the fabric of space and time..you mean moons?

I think the ‘rings’ are caused by the limit of our technology. 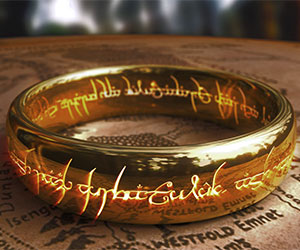 Calling it ‘a ring’ will only make this the fondest dream of any soon to be bride.

That Einstein guy was pretty darn smart if he birthed this hypothesis.

The mysteries of space are awesome indeed.

Didn't I just read that all the galaxies are moving away from each other? Now they aren't ?

...in a relativistic universe, time cannot be separated from the three dimensions of space. This is because the observed rate at which time passes depends on an object’s velocity relative to the observer. Also, the strength of any gravitational field slows the passage of time for an object as seen by an observer outside the field.

Regardless of where you are in the universe, the time is always now.

15 posted on 04/09/2018 7:35:15 AM PDT by Phlap (REDNECK@LIBARTS.EDU)
[ Post Reply | Private Reply | To 14 | View Replies]
To: Simon Green
I'd always heard that an "Einstein ring" is when you put black ink on the end of the eye-piece of a telescope so that the next guy who uses ends up with a black circle around his dominant eye.

That guy was such a practical joker

Time distortion is not only possible, it’s necessary. Space and time are interlinked at the cosmological level, and distortion of one distorts the other. At very high speeds, time distorts significantly (passes slower). At high spatial distortions, the same thing happens, such as at the event horizon of a black hole.

https://ancient-code.com/teslas-time-travel-experiment-i-could-see-the-past-present-and-future-all-at-the-same-time/
Tesla’s Time Travel Experiment: I could see the past, present and future all at the same time’

I’m pretty sure that you’re thinking of the “Galileo Ring”, which failed to lighten the mood of the Roman Catholic Inquisitors.

No, you didn't just read that all galaxies are moving away from each other - unless you were perusing a "dumbed-down" article about it in "Ladies Home Journal" (or even "Tech Times").

[...] hundreds of galaxies caught in each other's gravitational pulls.

That statement is itself an overgeneralized, popularized, dumbed-down version of the actual astronomical truth.