BATTLE GROUND, Wash. —Tonya Harding’s name isn’t Tonya Harding anymore. “My name is Tonya Price,” she said, when she saw me taking notes. In 2010, she had just returned home to Washington from Los Angeles,(snip) She was having drinks with a friend when she spotted one Joe Price, a heating and air-conditioning worker, on the karaoke stage. He was singing “Great Balls of Fire.”

“I’m going, damn, he’s got beautiful eyes,” she said. “I mean the eyes are the center to your soul, O.K.? You might have a nice butt, but I want to see the eyes.” Within weeks she proposed to him. (snip)

“I, TONYA,” which is based on hours of interviews with Ms. Harding and her ex-husband, honors its feisty subject by showing not just the abuse she endured, but how she fought back.

For the record, Ms. Harding loved the movie. “Magnificent,” was her word, especially after she’d seen it a few times. You have to remember, that was her life. That those beatings were very specifically hers, not composite beatings. And that they weren’t even shown in full: “People don’t understand that what you guys see in the movie is nothing,” she said. “That was the smallest little bits and pieces. I mean, my face was bruised. My face was put through a mirror, not just broken onto it. Through it. I was shot. That was true.” (snip) She said her mother threw a knife at her. (Her mother has also denied allegations made by Ms. Harding.) But “that’s all true,” she said.(snip)

Which is not to say that the movie is totally accurate. As I said, there are some things she would like to clear up. Such as:

“”””””I have to suck it up everytime OJ Simpson comes up in conversation - because he did not kill her. Courts and jury adjourned.””””””

Of course OJ killed the two people. No doubt about it.

He was not found innocent, he was found not guilty. Major difference.

I been on juries before. Some of the most ignorant people I have ever met. One in particular, a cardiologist, said he had experience with law enforcement techniques because he once had his bicycle stolen out of his garage. 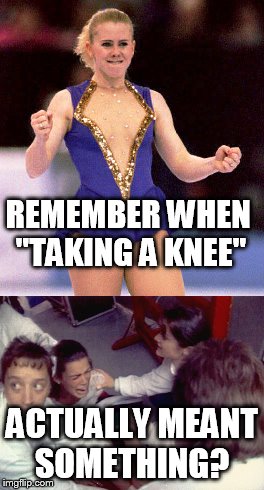 She and her husband would spend hours hunting together, just as she used to do with her beloved father — Mr. Price with a muzzleloader and Ms. Harding with a bow and arrow because she wanted “to give the animal a 50-50 chance to make it interesting and fair” (and also because felons aren’t technically supposed to possess guns in Washington State).

I find it amusing when the truth is divulged.

Now they can knee cap anyone who gets in their way..together.
Awe..

I think this marriage has already gone about 7 years. Her previous two marriages lasted about a year.

Yeah, USOC put a lot of effort into keeping Harding out, including putting in a lot of weird “anti-poverty” rules for qualifying tournaments like no homemade costumes. Admittedly Harding’s life even before the kneecapping was pure Jerry Springer, psycho mom, abusive ex-husband, and more and more. And getting that story on TV for the usual “human interest” crap would have been... unsightly. But she was a great skater and they probably should have found a better way to “contain” her story rather than weakening the team to keep her out.

Better than Gillooly, I guess. .

It’s ridic if they don’t allow you touch a gun but you can traipse around with a crossbow all day. Them things are scary.

You’re all missing my point.

It doesn’t matter what we think. The courts ruled. We follow the courts in a world of laws.

I don’t think he’s innocent. But the courts do and if I ignore them, then I’m ignoring rule of law. I hate it when people do that crap.

Even in the transgender thing.. I call lots of these idiots by their original name and gender pronoun. But I know that Isabella Bennett from Steampowered Giraffe is a woman named Isabella because the courts declared so.

The rule of law was followed. I can’t ask for anymore. If anyone of us don’t like it, there is a process we can all do that takes our contention up the ladder to Congress and the Supreme Court.

America is great that way.

Harding always gave off that “trailer trash vibe” and always will. Heck, she’s still hanging out in bars. She had the perfect chance to turn her story into a rags to riches but didn’t.

Kerrigan was smarter and played her role (not too convincingly but well enough) as little miss sweet and innocent which got her fame as a skating princess.

Then the drunk-driving chick from Ukraine beat them both.

You might consider the possibility you are wrong about this.

34 posted on 01/10/2018 8:35:05 AM PST by Tom in SFCA
[ Post Reply | Private Reply | To 7 | View Replies]
To: ClearCase_guy
But the Olympics are a sleazy business. Kerrigan was not really a great skater. But she was pretty and telegenic. Harding was a very good skater, but gave off a poor white trash vibe and so she wasn’t going to be a TV star and she wasn’t going to get a medal. Because the Olympics are about selling stuff. Kerrigan was saleable.

She could get together with Monica Lewinsky and do some kind of a The Princess and the Pauper thing.

For me, the whole thing high-lighted the beauty pageant aspect of figure skating.

Skating? Sure, skill is involved. But the judges give the medals to the people they like. Trailer trash don’t get medals. Sweet and innocent gets the medals.

Figure skating is an athletic endeavor in which prizes are awarded in a highly subjective manner.

Yes, they did. The court found him liable for her wrongful death, and entered a $33 million judgment against him.

But I know that Isabella Bennett from Steampowered Giraffe is a woman named Isabella because the courts declared so.

Some things are outside the jurisdiction of the courts. Biology is one of them. Bruce Jenner is a mutilated man. No court has the authority or power to declare him otherwise.

I have. I don’t buy into the hagiography. But I’ll keep it in mind.

By the way, I did not mean that to sound snarky, but in re-reading it, it did. Didn’t mean that if it came across that way.

I have actually considered it, and I think her part in it was damning enough for me.