Many kids' cereals pack more sugar than Twinkies and cookies 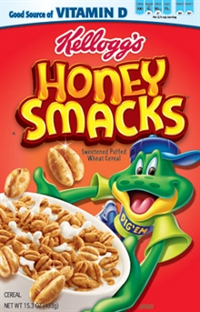 Parents have good reason to worry about the sugar content of children’s breakfast cereals, according to an Environmental Working Group review of 84 popular brands.

Some cereals are better than others. Nutrition expert Marion Nestle recommends:

Among the best simple-to-prepare breakfasts for children are fresh fruit and high-fiber, lower-sugar cereals. Better yet, pair fruit with homemade oatmeal.

In response to the exploding childhood obesity epidemic and aggressive food company advertising pitches to kids, Congress formed the federal Interagency Working Group on Food Marketed to Children to propose standards to Congress to curb marketing of kids’ foods with too much sugar, salt and fat.

But EWG has found that only one in four children’s cereals meets the government panel’s voluntary proposed guidelines, which recommend no more than 26 percent added sugar by weight. EWG has been calling for an even lower cap on the maximum amount of sugar in children’s cereals.

“When I went to medical school in the 1960s, the consensus view was sugar provided ‘empty calories’ devoid of vitamins, minerals or fiber,” said health expert Dr. Andrew Weil. “Aside from that, it was not deemed harmful. But 50 years of nutrition research has confirmed that sugar is actually the single most health-destructive component of the standard American diet. The fact that a children's breakfast cereal is 56 percent sugar by weight – and many others are not far behind – should cause national outrage.”

“Cereal companies have spent fortunes on convincing parents that a kid’s breakfast means cereal, and that sugary cereals are fun, benign, and all kids will eat,” said noted NYU nutrition professor Marion Nestle. “The cereals on the EWG highest-sugar list are among the most profitable for their makers, who back up their investment with advertising budgets of $20 million a year or more. No public health agency has anywhere near the education budget equivalent to that spent on a single cereal. Kids should not be eating sugar for breakfast. They should be eating real food.”

“As a mom of two, I was stunned to discover just how much sugar comes in a box of children’s cereal,” said Jane Houlihan, EWG’s Senior Vice President of Research. “The bottom line: most parents would never serve dessert for breakfast, but many children’s cereals have just as much sugar, or more.”

Studies suggest that children who eat breakfasts that are high in sugar have more problems at school. They become more frustrated and have a harder time working independently than kids who eat lower-sugar breakfasts. By lunchtime they have less energy, are hungrier, show attention deficits and make more mistakes on their work.

About one in five American children is obese, according to the federal Centers for Disease Control and Prevention, which has reported that childhood obesity has tripled over the past 30 years.

“It has been said that exploding rates of obesity and type 2 diabetes in today's children will lead them to be the first in American history to have shorter lifespans than their parents,” Weil said. “That tragedy strikes me as a real possibility unless parents make some dramatic changes in their children's lives.”

“Nearly 20 percent of our children and one-third of adults in this country are obese. Our children face a future of declining health, and may be the first generation to have a shorter lifespan than their parents. We must provide consumers with the information they need to make healthier choices and prevent misleading claims about the nutritional contents of food,” said Congresswoman Rosa DeLauro (D-CT). “Cereal is a prime example of this—we know that children do better in school if they have breakfast. But we also know that the type of breakfast matters. And yet, as the Environment Working Group’s report shows, many children’s cereals have sugar content levels that are above 40 percent by weight. Our children deserve better, and it is critical that we take action to combat America’s obesity epidemic.” Congresswoman DeLauro serves on the appropriations subcommittee responsible for the Food and Drug Administration and agriculture, where she oversees drug and food safety.

Do we ever need or need to be insulted by: Any of the these Never Trumpster losers like Kellogg’s, ESPN, Macy’s, ”The Cast of the Hamilton/Broadway liberals, the ABCNNBCBS, New York Slimes, Compost, Starbucks, Alec Baldwin/SNL,, Penzey’s Spices-owner Bill Penzey, MGYN Kelly, Garrison Keillor, The Washington ComPost Not News Service, Michael Shannon/ “Nocturnal Animals” the BushCo thugs, Compost, Grub Hub, Pepsi-Co, Hollywood, the lying pollsters, faux phoney news, all the left wing mediots/fish wraps, and other Never Trumpsters, listed below in our lives like Cleveland Cavaliers forward LeBron James/?

Companies/people we can consider buying from:

***Coke has had a cozy relationship with the Criminal Clintoons, go to the link below:

I really don’t care about this.

Once upon a time, the names were more honest - Sugar Smacks, and (Super) Sugar Crisp. They’ve been playing that game for a few years. I looked at their products and the only thing of theirs I eat once in a while is the keebler crackers in the green box. And I know those are horrible for me so I like having an incentive to stop eating them.

It actually used to be a lot worse when it used to be called sugar smacks.

Even if Kellogg were a good company, their products kill people and screw others up. They pack that processed crap in sugar and add anti bloating agents into those lucky charms.
Frosted Flakes are not great. When it floats in milk it resembles industrial waste.

My advise, if ya eat that garbage, do it in moderation using extreme care.

Yep I remember. They used to be called Sugar Smacks not Honey Smacks.

What they now call Corn Pops used to be Sugar Pops.

Somehow they decided that sugar was a bad word in the name of a cereal. But they didn’t reduce the sugar content of the cereals. They just changed the name.

Yup. I remember that too! Sugar Smacks, as they were called then, were one of my favorite cereals as a kid. They dropped the word sugar from their name because it wasn't a selling point anymore, but kept all the sugar in regardless. Corn Pops, another favorite of mine then, were known as Sugar Pops.

Why is it that it’s progressives that push such toxic food on the masses?

Cook a healthy breakfast instead: Eggs, bacon, toast, the liver of your enemies. And wash it down with leftist tears.

The pervert who wants to wear women’s clothing is

Sugar can be addressed by exercise.
Excess sodium is harder to get rid off, it can increase blood pressure, making heart work harder and ruin kidneys.

Honey is supposed to be good for you, it has a lot of things besides sugar.

Eat whatever you want!

I wish the federal government would get out of the business of recommending food or diets of any kind no one thought much of it or fretting over obesity.

We used to have apple pie for breakfast a lot, like our colonial ancestors, who would no doubt be surprised to find we tolerate a government that tells us what our kids should eat.