Archaeologists have discovered the remains of a fortified settlement that could be Libnah, part of the Kingdom of Judah in ancient Israel, and a place where the Israelites stopped during the Exodus...

Libnah was also the site of a revolt during the reign of King Jehoram of Judah (mentioned in 2 Chronicles 21:10) when the king had forsaken "the God of his fathers".

Another biblical account states 185,000 Assyrian soldiers under King Sennacherib were killed by an angel of God while they were encamped near Libnah, which prevented them from advancing on Jerusalem from Lachish (2 Kings 19:35)...

Tel Burna is located in the rolling plains of the Shephelah region in south-central Israel, which served as a strategic borderland between the Philistines to the west, and the kingdom of Judah and the Kingdom of Israel (northern kingdom) to the east.

It is surrounded by lots of ancient sites that have been excavated in the past and although the team have only been working on this site for several years, they have already found important clues that identify it within the context of biblical history...

"... to date, there are other candidates for the location of ancient Libnah, including nearby Tel Zayit..."

So far, the archaeologists have discovered a fortification system around the site dating back to the 7th century BC, and have so far exposed several metres of the walls.

They have also discovered artefacts dating back to the 7th and 8th centuries BC, including pottery handles and pillar figurines stamped with rosettes, and other objects marked with a Lamed-Mem-Lamed-Kaf (LMLK) – a seal impression meaning the items were state property belonging to King Hezekiah (circa 700 BC).

Map showing the Kingdoms of Israel (blue) and Judah (orange), ancient Southern Levant borders and ancient cities such as Urmomium and Jerash. The map shows the region in the 9th century BCE. 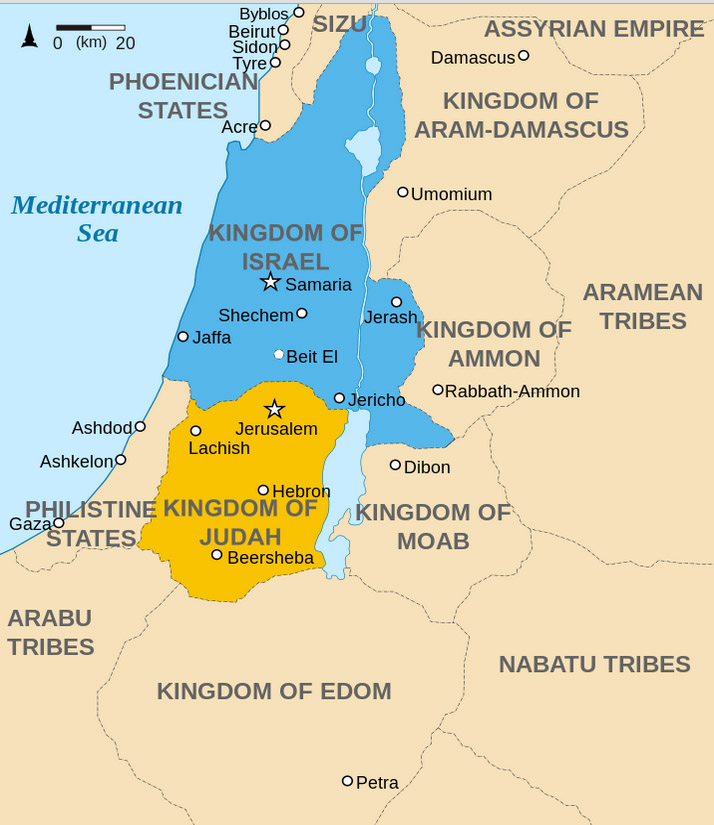 Archaeologists as well as dunces and charlatans have searched all over for the remains of Noah’s Ark, or the ruins of Sodom and Gomorrah, or the lost army of the Pharaoh of the Exodus, and have found either nothing, or tried to pull off hoax after hoax.

Archaeology has turned up almost nothing at all from the Bible, but the Bible has been tapped for names of things and in the process undermined the facts on the ground on the historical annals aspect of the texts, and as a consequence undermined the believability of the whole work.

The name of an otherwise unremarkable and unattested group, the Hittites, was pulled out of the OT and assigned to some then-new discoveries in Anatolia. There’s nothing much about the Hittites in the OT, and the Anatolian group was a major power, but left no trace at all in the OT.

Wow! Every spade of dirt confirms the Biblical account.

This ironworks is ancient, but still exists. Where are the mormonic ironworks claimed to be in America that supported a population that stretched from one sea to another? Heck, where are the foundations of their homes or their bones?

The actual weight of "almost nothing at all" can be debated until the cows come home, but there haven't been any (publicized) archeologiical finds disproving the Bible as historical document.