ARLINGTON, Va. — “It all started with an early [canoe ride] up the Zambezi River,” said Cpl. Justin Trinidad, a Marine security guard with Detachment Harare, Zimbabwe, Marine Corps Embassy Security Group. The day that began with a simple tour ended with Trinidad saving the life of another man on the safari after the group was attacked by a hippopotamus March 14.

Trinidad, a Fort Lauderdale, Fla., native, and his girlfriend, Kaylynn Hankey, were enjoying a guided trip up the Zambezi River when one of the guides began shouting that there was a hippo in the water and everyone needed to paddle to shore, said Trinidad. Three of the boats did just that, but Javier and Patricia Franco didn’t hear the warnings until the hippo approached them.

“All I saw was the couple being launched a few meters in the air,” said Trinidad.

The wife landed a safe distance from the animal, but the husband landed right on top of it, said Hankey. The hippo went back underwater, and no one wanted to move.

“We were still freaked out because we didn’t know where the hippo was,” said Trinidad.

Trinidad realized something had to be done when he noticed that Patricia was struggling inside her oversized life jacket and heard Javier complaining about his leg, both still in the water.

Trinidad said he thought to himself, “God, please watch over me, because I’m about to do something stupid.”

He instructed Hankey to help him get to the couple, rowing over where the hippo was last seen. Hankey said she wanted to turn back, but Trinidad encouraged her to keep going.

As they approached the couple in the water, Trinidad realized that Javier required immediate medical attention. They steered the canoe close enough for the couple to grab on to the side of the boat before it was swept away by the river’s strong current.

As they rode the current, Patricia managed to let go of the boat in shallower waters and wade to the riverbank as the rest of the group continued to be taken downriver by the current. Hankey, who remained in the boat, grabbed on to an overhanging tree in an attempt to stop the canoe, but fell out instead. She held on to the branch until one of the guides could help her to shore.

Trinidad managed to steer the canoe to a rock in a shallow part of the river as the injured man held on. After helping Javier into the boat and pulling it to shore, the Marine began to assess the situation.

“That’s when I noticed that his foot was hanging by a piece of skin,” said Trinidad.

One of the guides came out of the brush and was overwhelmed by the extent of Javier’s injury. Trinidad calmed him down and tried several options for a tourniquet, eventually using a neck strap from a pair of binoculars. With the bleeding under control, Trinidad and the guides tried to figure out how to get the man to a hospital.

A family on a fishing trip pulled up in an all-terrain vehicle an hour later. Trinidad helped load the injured man into the back of the car using a deflated canoe as a stretcher. More than four hours and a car and plane ride later, Javier was in stable condition at a hospital in Johannesburg, South Africa.

Although Trinidad could not save the man’s foot, he said he was pleased when he heard how happy the Franco’s children were to be reunited with their parents.

“My dad died when I was little, so I was glad I could save [their] dad,” said Trinidad.

He doesn’t acknowledge his actions as a big deal. Trinidad said he saw worse things during his three deployments to Iraq as a field radio operator. But for those who witnessed the ordeal, including the Franco children, his actions were nothing short of heroic.

“My first instinct was to jump out of the boat,” said Hankey. “I was emotional, but Justin [Trinidad] stayed strong and helped us all. Honestly, if Justin wasn’t there, Javier would have died.”

TOPICS: Military/Veterans; Outdoors; Pets/Animals
KEYWORDS: hippo; jpb; marine Navigation: use the links below to view more comments.
first 1-20, 21-36 next last
Cpl. Justin Trinidad, a Marine security guard with Detachment Harare, Zimbabwe, Marine Corps Embassy Security Group, and his girlfriend, Kaylynn Hankey, enjoy the view from their canoe during a safari trip on the Zambezi River in Zimbabwe on March 14. About 20 minutes later, Trinidad saved the life of another man on the trip when a hippopotamus attacked the group.
1 posted on 05/12/2010 9:40:28 AM PDT by JoeProBono
[ Post Reply | Private Reply | View Replies]
To: JoeProBono

Hippos will flat out “F” you up!

I am repeatedly told that attacks like these are rare ;-)

Why anyone would want a hippopotamus for Christmas is beyond me.

No doubt a conservative. You’d never catch a sissy ass lib trying to help anyone. Especially if their life was at stake.

You have to be one squared away Marine to get Embassy Duty. Trust me.

Hippos are the true King of the Jungle.

NOBODY messes with the Hippo. Not lions, not crocodiles, not humans. What a great Marine. Able to recognize the situation for what it is, and still act in the face of clear danger.

They don’t let the guides on Disney’s Jungle Cruise ride shoot at the hippos any more. 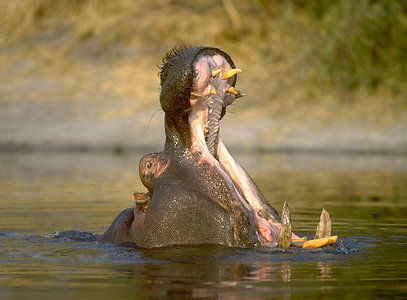 OoooRah...that’s a hard charging Devildog. Weather it’s charging into the teeth of some Jihadi ambush, or taking on a raging Hippo, you can always count on my Marines to get the job done :-)