This article appeared in the Post & Email awhile ago. It pertains to Obama's mulitiple records of Selective Service registration. http://www.thepostemail.com/2010/03/08/are-there-multiple-records-of-obamas-selective-service-registration

The Selective Service Registration records indicate that Obama received a 1H Classification. Class 1-H means "Registrant is Not Subject to Processing for Induction."

Typically, registrants are given a 1-A Classification, which mean "Available for unrestricted military"

If Obama received ANY other type of classification other than 1-A, he would have had to applied for it, which means that there is an additional file on him.

you will see that when someone registers for the Selective Service, in order to get a Classification that is NOT 1-A, the person registering has to request it.

(see. § 1633.2 Claim for other than Class 1-A.) THAT PERSON WILL HAVE TO PROVIDE SUPPORTING EVIDENCE TO THE LOCAL SELECTIVE SERVICE BOARD.

And, that evidence is kept in a separate file.

I really didn't understand the Selective Service Classifications until I performed some research.

During my research, I came across this "obscure" thread regarding Karl Rove. The thread appeared under a post titled Karl Rove's special Draft Classification. http://community.comcast.net/comcastportal/board/message?board.id=news&thread.id=775094

The thread, pertaining to Karl Rove's Classification, indicates that Class 1H NEVER gets drafted. I have yet to find an explanation why. But, essentially, this Classification is a "get out of war free card."

Again, it is my understanding that in order for Obama to be given this type of classification, he MUST have provided evidence as to WHY he felt that he qualified for a 1H Classification.

Could it be because he said he was MUSLIM? Did the Military make special exceptions for MUSLIMS at that time or was it because he was NOT A US CITIZEN?

Here's some info about MUSLIMS and the Selective Service. I'm not sure if this pertains to Obama, but it is quite interesting.

In any case, according to the law, Obama was required to register for the Selective Service and he had to present Identification, which he DID NOT. You will see from the form that the "No ID" box is check marked.

Therefore, Obama DID NOT comply with the law, which is as follows: http://www.archives.gov/federal-register/codification/proclamations/04771.html

1-301. Persons who are required to be registered shall comply with the registration procedures and other rules and regulations prescribed by the Director of Selective Service.

Obama's lack of ID, as indicated on the Selective Service Registration Form makes me wonder what type of ID Obama had at the time he actually registered for the Selective Service. Did he have a driver's license? If he did, what documentation, e.g. birth certificate, social security card, etc., did he present to get his Driver's license? I know my DMV marks down what type of Identification I bring in to verify my identity. Could the DMV be another avenue to obtain information on Obama?

I don't know whether or not the Selective Service Registration Form is a Forgery. It appears that Obama registered the date/month/year he was suppose to register. The SS Proclamation outlines the requirements for males born in 1960 and 1961 and it appears that Obama did comply.

However, Obama DID NOT comply with "each person SHALL present for inspection reasonable evidence of his identity." SHALL means MUST!

Could Obama's non-compliance make him INELIGIBLE to hold public office (see http://en.wikipedia.org/wiki/Selective_Service_System). If this is the case, then the birth certificate and/or dual citizenship may not even matter. Obama would have NEVER been eligible to hold ANY public office.

So the real question is, DID Obama WILLFULLY withhold documentation that would verify his identity?

I just have a "nagging gut feeling" that there is something more to this and no one has bothered to investigate. Looking into it just might yield some valuable information. 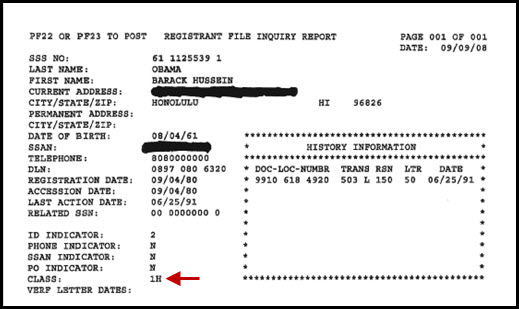 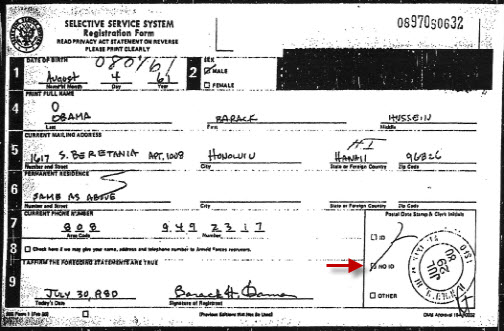 sorry if already posted, links are clickable at the webpage. Hat-tip to Attone for this one.

all of these are guesses

But more importantly the 1A etc classification system also ended in 1976 and all young men registering after July 21 1980 were classified 1H...

1-H
Administrative “holding” classification for people whose age group is not being currently called, or whose lottery number is above the announced ceiling.

I’m an Aussie, don’t understand your SS system, thank you for your comments.

I was born in May of 1955.
When my draft classification came up, My draft card read “1H”.
I had never done anything to affect my classification, I had no relatives or contacts who could have done so for me.

I had no idea what 1H meant, none of my friends had gotten that classification.

I actually called the draft board for an explanation.
I can still visualize the sergeant who answered the phones crew cut, he had a deep command voice, with a hint of a drawl.

His reply was as follows -

“Well son, we believe this war is about over, it is not expected that your service will be required, your classification is 1 Holding”.
“If the situation changes, you WILL be notified”.

So from my experience, “1H” is just luck of the draw, too young to be caught in the Nam’ draft, then the draft was ended.

thanks, that appears to answer the questions asked in the article.

It is an old, political non system ‘system’. It goes back to the Civil War. To an extent, it is a draft of men by county. It is very locally administered, from the days of when it was thought that the local authorities would know who were the ‘free’ men that could be drafted.

There is a notion that better educated men were to be given ‘deferments’, while working stiffs with out too many children could be rounded up.

Really, just gussied uped, not much different than press gangs, with the exceptions of the elite that wanted to could game the ‘system’.

“On January 1, 1839, Secretary of Defense Melvin R. Laird announced the creation of an all-volunteer armed forces, negating the need for the military draft.”

He looked younger on t.v.

I’m wondering why they don’t stay consistent. For Health Care, they’ve got Death Panels for the “old people,” now for the young, there is the Younger Set’s “death panel” with Selective Service. Seems like they should do this for seniors and kill 3 birds with one stone. 1. Save the Children, 2. Install Selective Service 3. but for OLD PEOPLE so money could be saved on health care by having them shot up in some war for the elederly among the mountains and poppies. (... and I’m an “old people” /s)

11 posted on 04/28/2010 5:57:49 AM PDT by ThePatriotsFlag (http://www.thepatriotsflag.com - The Patriot's Flag)
[ Post Reply | Private Reply | To 1 | View Replies]
To: Fred Nerks
The Selective Service Registration records indicate that Obama received a 1H Classification. Class 1-H means "Registrant is Not Subject to Processing for Induction."

Every single person who has registered for the draft since it was restarted during the Carter years has been classifies 1H. There is no conscription going on so nobody is subjec to processing for induction.

. . . . Well, facts in the article are important since an alinsky S.P. (site pest) is on the thread, and denying information already.

IMHO Barak did not volunteer to serve because he is gay, a closet queer, and submissive to men who look to Obama like they could give his butt hole a severe reaming.

Thats why Obama is grovelled and bowed to the King of Saud and the Emporer of Japan.His a$$ was likely in a severe state of pucker and thats the problem. Obama cannot represent.

Obama is not patriotic. He is treasonous.

Thats the whole point about Obama's lack of Service.

He is not qualified to be president. OTOH Sarah Palin is so qualified as a patriot. Her conduct proves it. Obama's does not.

A 1H Classifucation? Why would the skinny little queerio president want to hide behind that. He could have volunteered! LOL!

Conscientous objecter would include muslim also. If he smoked heavily he could that. Just run around the block a few times and come in huffing and puffing for his physical.

1-H Registrant Not Subject to Processing for Induction.

Registrant is not subject to processing for induction until a draft is enacted. All current registrants are classified 1-H until they reach the age of exemption. They then receive the classification of 5-A.