More than a year after his historic election, requests for President Obama's birth certificate continue to pour into the state's understaffed Health Department from people on the Mainland who refuse to believe he was born in Honolulu in 1961.

In an attempt to stem the flow of requests, the agency recently set up a special page on its Web site devoted to the issue of Obama's birth certificate and who is eligible to get the records.

But the requests for the president's birth certificate keeping coming at a rate of 40 to 50 a month, according to Health Department spokeswoman Janice Okubo, who has been handling the requests since Obama became a serious presidential candidate in 2008.

"They're spurred on by these 'birther' blogs who direct them to bombard the Health Department even though they have no legi..... 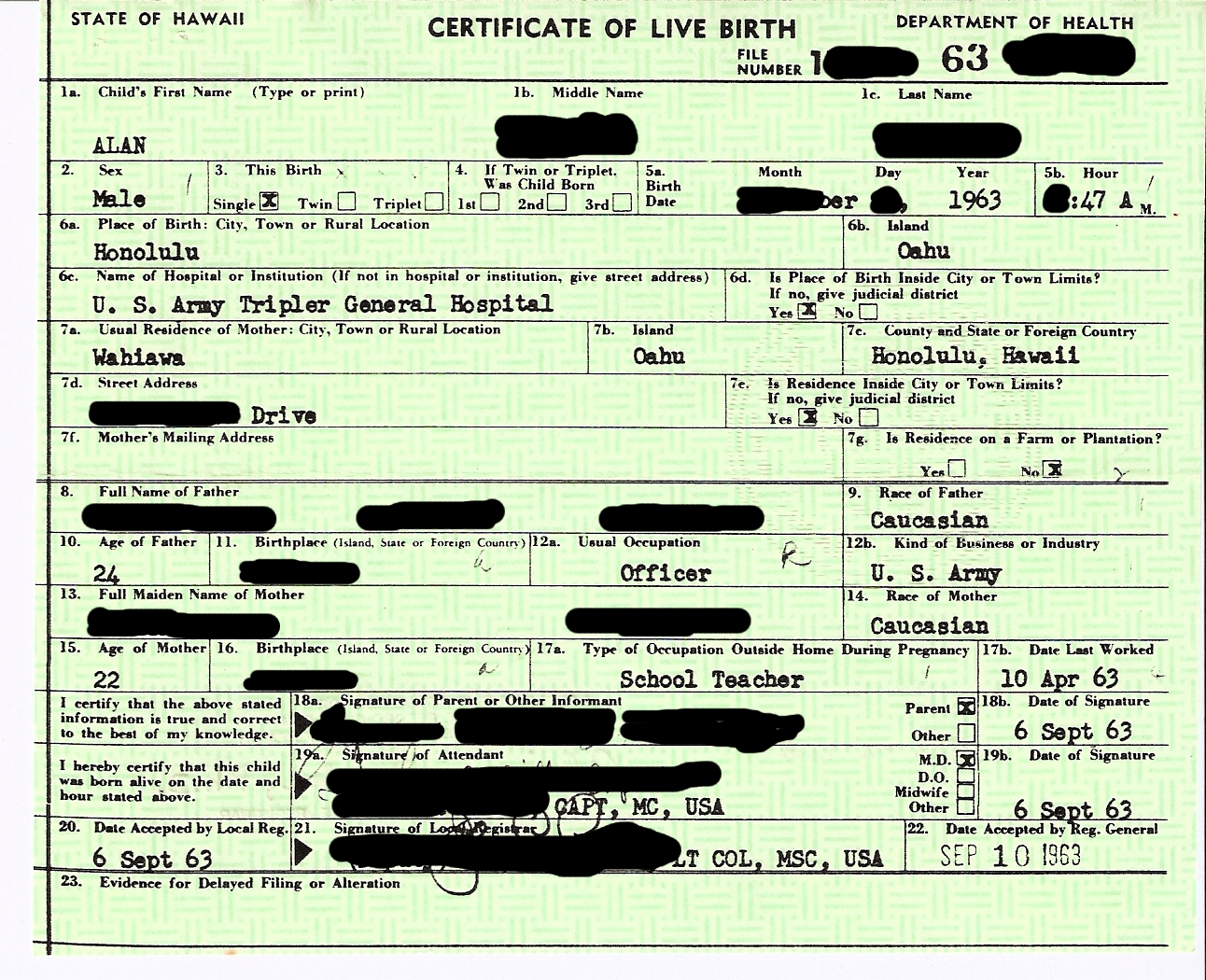 When you’re elected to a position where the facts of your birth determine if you are qualified for the job, your birth certificate should be public information.

Very impressive - has the name of the hospital, the doctor and the parents.

Looks like little Joe was born on September 4th to a US Marine and his wife.

When you’re elected to a position where the facts of your birth determine if you are qualified for the job, your birth certificate should be public information.

Make it a state law (like I've been saying since after the election) and it will be ... :-)

I've said from back then that the various states (or even one or two or three of them; that's fine, too...) should make it a law that a candidate cannot be on the ballot in that state unless he (or she) produces their birth certificate.

There have already been about four states that started that legal process (but it hasn't passed yet).

knock yourself out. I said what should be. I am not an activist.

The Hawaii DOH Administrative Rules agree with you. If only Chiyome Fukino hadn’t hid them until a year after the election, any secretary of state might have known they could ask for and receive a certified copy of his original birth certificate and saved a lot of trouble.

Fukino illegally hid those rules until it was too late for the SOS’s to ask for a certified copy.

I think it’s time that law enforcement investigated why she did that.

There is another thread about this subject, from earlier, if anybody’s interested. Do a search of “Espero” in the thread titles and it’ll take you to it.

Good grief. They’re complaining about “40 or 50 requests a month,” and they’re whining that they’re overworked. That adds up to 1 or 2 a day. Gee whiz.

They asked for it. They should be getting thousands of requests every day.

Here’s the text of the bill Espero introduced.
http://www.capitol.hawaii.gov/session2010/bills/SB2937_.pdf

First read it and laugh. And then realize they seriously want to do this, and weep.

I said what should be.

Absolutely! When that office is President, every record should be made public. I don’t understand why the American people at large are not more outraged over this.

I recently read a post on another forum that quoted an Indonesian classmate from Obama’s grade school days that said he remembers Barry saying that he was going to be President of the United States. This from a child not even living in this country. It adds credence to those who believe that, given his Communist influence from both his family and every close association, he was groomed as a Communist Plant to undermine our country. Whether he is a Plant or not, he certainly has promoted and continues to push policies harmful to us. He is the most anti- American person to ever hold the Office.

13 posted on 02/20/2010 5:07:32 PM PST by conservativejoy
[ Post Reply | Private Reply | To 3 | View Replies]
To: muawiyah; LucyT; Fred Nerks; STARWISE; onyx
You'd think, that by this late date, that there'd be one or two second or third cousins of BHO, found at online genealogy forums boasting about their relation to the Prez, and that one of them, A RELATIVE OF OBAMA descending from the same gg OR ggg OR gggg grandparent could legally order and receive a copy of his BC.

Incidentally, do you by any chance have any idea why the Hawaii DOH is complaining about the receipt of a mere 60 requests per MONTH for the BC --- primarily all those folks have to do is send back a form letter stating Sorry.You.Aint.Eligible.To.Find.Out.If.He.Is.Or.NOT

I mean... that certainly doesn't sound very difficult, much less time consuming. WHAT are they complaining about?

I suppose Obama counts this as one job “saved or created”.

16 posted on 02/20/2010 6:41:53 PM PST by OrangeHoof ("Barack Obama" is Swahili for "Bend over suckahs".)
[ Post Reply | Private Reply | To 3 | View Replies]
To: hennie pennie
I believe that Obama wrote a letter to Kapi'olani Hospital acknowledging it as his birth hospital.

I know that birth announcements were printed in local newspapers and since have been reproduced all over the world. No hospital name was mentioned.

"We can't confirm or deny it – even though all the information out there says he was born at Kapi'olani Hospital," said hospital spokeswoman Claire Tong. "Our hands are tied."

That don't make a lick of sense.

Births, deaths, etc, are exempted from the HIPAA privacy regulation, I thought.

17 posted on 02/20/2010 6:54:45 PM PST by WilliamofCarmichael (If modern America's Man on Horseback is out there, Get on the damn horse already!)
[ Post Reply | Private Reply | To 1 | View Replies]
To: hennie pennie
Who is Obama's birth doctor? Is that such a hard question for the President of the United States to answer?

1. Right now, I would just be satisfied with Obama coming out and announcing to all the world the name of his 1961 birth doctor so that the good doctor and his family can rightfully enjoy all the public glory and public rewards that a doctor who delivered a president of the united States should receive.

2. But surprisingly, dear old Obama has been conspicuously silent when it comes to publicly giving us his 1961 birth doctor's name.

3. Why is dear old Obama denying his 1961 birth doctor and his family all the public praise and rewards that a doctor who delivered the sitting President of the United States should be entitled to?

4. For instance, the doctor and his family could appear all over the television on such shows as Larry King, Hannity, O'Reilly, and Beck and become RICH AND FAMOUS.

5. The good doctor could write a best-selling book about his experiences as a doctor at Kapiolani Hospital, the hospital where Obama says that he was born.

6. The good doctor could have a TV-movie made of his life, and he and his family could become rich and famous from books and movies.

7. The good doctor's family could have members who are important or not so important people today, people who could use the financial rewards and publicity that would come to them when Obama publicly announced the name of his 1961 Hawaii birth doctor.

8. But poor Obama, he is so silent about the name of his birth doctor.

10. Could this be the reason: There is NO doctor name or hospital name on Obama's 1961 long form birth certificate?

The majority of the people who e-mail or send letters to Okubo asking for Obama’s birth certificate do not challenge her response once she tells them they have no legal right to the information, she said.

But about a dozen people continue to hammer Okubo with follow-up requests.

“They want all of the organizational charts for our Office of Health Status Monitoring that handles vital records and for our health informations systems, our IT office,” Okubo said. “They request from me every single communication or every single document or request every record available related to President Obama’s vital records.”

Okubo readily acknowledges that she hasn’t always been able to reply to a request within 10 working days as required under Hawai’i’s Uniform Information Practices Act, the state’s version of the federal Freedom of Information Act.

But she adamantly disagrees with the “birthers’ “ interpretation of Hawai’i law.

“They usually say that by not giving out his birth certificate we’re breaking the law,” Okubo said.

“But we would be breaking the law by giving out a birth certificate to someone who does not have a right to it.”

When Okubo told one writer they did not have a right to Obama’s birth certificate because they were not related to the president, the person wrote back saying they, indeed, had a common ancestor.

“They said they have a tangible right to his birth certificate because they’re descended from Adam,” Okubo said, referring to the biblical figure. “We told them they need to provide some type of legal documentation.”