The first thing is to misstate the facts with a bit of incredulous drama. Let’s begin with the first sentence, “The Shroud of Turin carbon dates to the 1360s.” In fact, the results of carbon dating undertaken in 1988 estimated the date of the cloth between 1260 and 1390 C.E. This was reported in Nature, a peer-reviewed scientific journal.

If we focus on peer-reviewed scientific journals, which is appropriate, we discover that those carbon dating tests have been roundly discredited. One need only refer to Thermochimica Acta (Volume 425, Issues 1-2 , 20 January 2005, Pages 189-194) and Chemistry Today (July/August 2008) to understand why. Robert Villarreal who led a team of nine scientists at the prestigious Los Alamos National Laboratory, using some of the most advanced methods and spectra tools, confirmed the findings in those journal accounts. He stated that the sample area was significantly unlike the rest of the shroud. In other words it is almost certain that the shroud itself was not carbon dated.

Christopher Ramsey, the current head of the Oxford Radiocarbon Accelerator Unit, a lab that participated in the original carbon 14 dating of the Shroud, states on the Oxford website (posted in March of 2008) that because of new information “further research is certainly needed.” He went on to say:

It is equally important that experts assess and reinterpret some of the other evidence. Only by doing this will people be able to arrive at a coherent history of the Shroud which takes into account and explains all of the available scientific and historical information.

Atheists are quick to point out, correctly so, that many Christians ignore scientific and historical evidence, particularly when it comes to evolution. Yet, some Atheists do exactly this themselves. It is fine to believe that the shroud is not the real thing, but do so with facts that are correct. Draw conclusions from those facts. Make a good case. Don’t be a fundamentalist. We don’t know in certain terms the age of the shroud or its provenance. To assert that it is fake in the absence of real evidence takes a leap of faith no less than it does to assert that it is real.

Let’s look at some other points from the posting:

Shroud research needs skeptics who will engage the science and the history of this unsolved mystery. That ultimately is the best way for Christians and Atheists alike to resolve the truth about this cloth.

Scientifically, we don't know the age of the Shroud of Turin. However, we do know it is at least twice as old as the now discredited carbon 14 date. As for the images, we have no idea how they are formed. But they were not made by any known artistic method.

The Atheist, the skeptic, the rationalist must accept the scientific facts just as any Christian should. To deny that the shroud is authentic requires a leap of faith. So does affirmation. But the evidence suggests that it is a late-Second Temple era burial shroud of a crucifixion victim. From that, much can be inferred.

I suspect this blog is run by Shroudie... but I don't know for sure.

That’s because some Atheists are Fundamentally against G-d.

Why would being resurrected make an image on the shroud anyway?

Thanx for the ping. Keep an eye out for more for us.

6 posted on 10/12/2008 5:59:04 AM PDT by pyrless (If you're gonna burn our flag, make sure you wrap yourself in it first!)
[ Post Reply | Private Reply | To 1 | View Replies]
To: Salman
Not by anything other than happenstance: the image is (as best as we can tell so far) the result of Maillard reactions between coating left on the linen shroud, and various gases emanating from a corpse (putrescine, cadaverine, etc.).

What the Resurrection did is twofold:

1) interrupt the process, so that any further degradation of the body which *would* have happened (together with any effects this would have on the shroud) was arrested. This meant that we had a snapshot in time of the chemical reactions between the body and the shroud.

2) leave an empty shroud around with an image on it, so that people might happen to notice.

It is important to note that we don't knwo the exact conditions under which the image was formed: temperature, humditiy, any spices or such used to prepare the body; the exact duration between time of death and burial; and the condition of the body when placed in the shroud (e.g. beating, possible dehydration, crucifixion, etc.) -- all of which might have effects on the condition of the body. (Bruising and rupturing of cells will leak the contents of the cells outside of the cell walls) -- which might affect the rate of decay or the relative composition of any decay prodcuts initially.)

It is also important to note that if the shroud is really of a crucified man, theft of the body (as alleged in atheist schlock book "The Passover Plot") would interrupt the process as surely as a Resurrection.

So accepting a 1st-century provenance for the shroud, and even accepting that the man whose image is on the shroud was crucified, does not disqualify any other suggestions about the shroud due to "superstitious nonsense about the Resurrection."

“the image is (as best as we can tell so far) the result of Maillard reactions between coating left on the linen shroud, and various gases emanating from a corpse (putrescine, cadaverine, etc.).”

I don’t put much into this theory. The shroud image shows evidence of bone and dental structure, which doesn’t fit with a putrification theory. 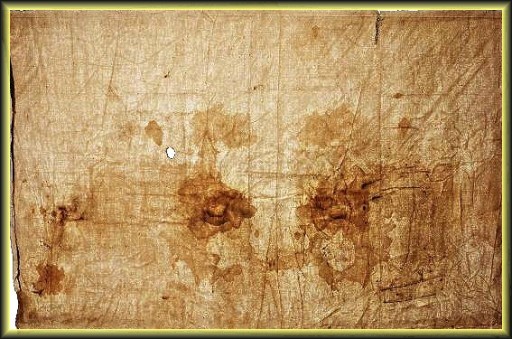 But the reaction of the coating of the linen is present in the image regions of the Shroud; it has been verified microscopically and its thickness and composition has been characterized. So it is not "merely a theory".

The mechanism of formation of all features of the image remain unknown -- this is not the same as "must be a fraud" or "must be a miracle". I place it in the "hey, cool!" category.

11 posted on 10/12/2008 9:16:06 AM PDT by grey_whiskers (The opinions are solely those of the author and are subject to change without notice.)
[ Post Reply | Private Reply | To 8 | View Replies]
To: Kirkwood; grey_whiskers
I don’t put much into this theory. The shroud image shows evidence of bone and dental structure, which doesn’t fit with a putrification theory.

We now KNOW what the image is composed of... and the fine coating of a caramel like substance on the fibers of the image area CAN be created by a Maillard reaction. However, we really don't know that a Maillard reaction was all that was required to created the image. For example, Maillard reactions will occur over time but are usually very slow at normal environmental temperatures. Adding heat, as we do in cooking, will accelerate those reactions. We use this accleration to our benefit, converting sugars into tasty caramels.

Outgassing of such gasses as putrescine and cadaverine would have to follow the laws of gasses which would tend to cause the gasses to dissipate and expand into the atmosphere. The image on the Shroud, however, shows that whatever caused the formation of the image acted in a vertically collimated manner in seeming violation of those gas laws.

It is intriguing that it seemed to have worked only, and equally well, in both vertical vectors, up and down, with absolutely no horizontal vector at all. Gasses don't rise and also fall at the same time at the same temperature, and they certainly don't remain in a column both up and down. Perhaps, putrescine falls and cadaverine rises, or vice verse? I don't know if anyone has done any experiments to determine this.

Perhaps something that radiated from within the body, collimated vertically, and partially shadowed by the internal bony structure, acted as an accelerant to the Maillard reaction only in its direction of action, thereby leaving the imprint of those bones, the metacarpals in the hands and the frontal teeth, in the image. Whatever it was, had to have acted cohesively (almost like a laser) both upward and downward but not with any appreciable amount or angle in any other vector, otherwise the resolution of the image would have suffered and blurred out.

Another problem is that whatever caused the image imprint, effected both living and dead tissue such as the hair and also caused the creation of images of herbs placed around the body (which possibly supported the Shroud over the body, thereby presenting a more flattened receiver).

Whatever it was, had to have acted cohesively (almost like a laser) both upward and downward but not with any appreciable amount or angle in any other vector, otherwise the resolution of the image would have suffered and blurred out.

What is intriguing about this, is that there does not seem to be any *diffusion* of the gases, so that the image remains sharp, with no information being propagated horizontally; secondly, as pointed out, what is it that caused skeletal details, shadows of plants, etc. to show up?