Last week’s Supreme Court oral arguments sparked a glimmer of hope on left, with the hope being to use a possible overturning of Roe v. Wade as a wedge issue in 2022 to drive turnout. But while signs are certainly pointing toward the “right” to abortion being gutted, would such an event really represent a reset for the coming election?

Color me extremely skeptical that the electorate is that malleable at this point, and I’m apparently not the only one throwing cold water on the idea. Politico spoke to several Democrat strategists who not only think the abortion issue isn’t a winner for them, but that they should actually avoid it altogether. Of course, that realization isn’t a happy one for them.

Shorter Politico: Democrats realize they’ve got no out for 2022. 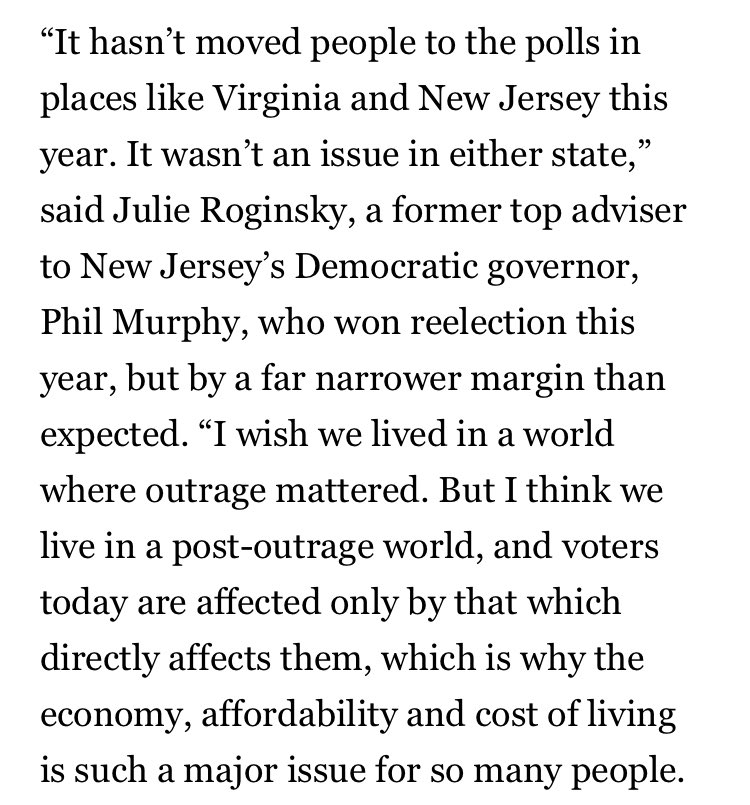 I’m not so sure we live in a “post outrage world.” That seems more like an excuse for why people aren’t buying what the left is selling. People can certainly still get outraged, on and off the internet, but the idea that a curtailing of the right to kill a baby in the womb was going to cause a massive shift in the electorate never made much sense.

That’s primarily because the electorate is already fairly set when it comes to the issue of abortion. Those who are militantly pro-choice already vote Democrat and show up at the polls. Demographically, we are talking about single, college-educated women. But your average swing-voter is voting on economic issues, not rabid support for abortion. And though the article tries to make it seem like such a position lacks virtue, I don’t see that at all. It is perfectly acceptable to vote based on what actually affects you.

The fact is that the vast majority of Americans support greater restrictions on abortion. That doesn’t make them all pro-life, but it does mean that the Democrat position of completely unfettered abortion is extreme and unpalatable for most. It’s certainly not one that’s going to mobilize an army of new voters to somehow hold off the probable coming red wave in 2022.

There’s just nowhere for Democrats to really go from here. They can keep leaning into January 6th talk and hoping for another visible event to obsess over, but I think that’s actually become a net negative issue for them because people see it as prioritizing meaningless grandstanding over kitchen table issues. The economy doesn’t look to improve dramatically enough to make a difference in their prospects either.

Meanwhile, the glimmer of hope that the Supreme Court would become an ace in the hole has already died out. It’s just not going to be an issue that changes the outcome of next year’s election. Certainly not with how big of a hole the Democrats are already in, both of their own digging and historically.

The Dems have yet to play what has always been their most powerful card: getting the GOP to do something stupid and snatch defeat from the jaws of victory.

Even if the gop wins, they’ll spend a couple of years “reaching across the aisle” to assist their good friends, the democrats. Then they’ll lose again and go back to where the want to be. Not in a position of leadership, perish the thought, but as the loyal opposition that mouths platitudes and does nothing. So long as they get their share of the spoils, the gop will be happy.

LAUGH BREAK Who knew we were out of oil?

But our dipstick is located in the White House!

But 2024? After another two years of GOP majorities conspiring with the minority to destroy the nation, and no alternative on the ballot?

THEN it’s time to worry.

It’s all about turnout. Who’s mad enough to vote. I promise the Democrats will make up any shortfalls with vote fraud as long as it’s close enough. They can NEVER let 2016 happen again and they will do whatever they must, knowing the media will protect them and the DOJ will look the other way.

The Republic is hanging by a thread.

The Left's (Progressives, both Democrat and Republican) ability to shape the narrative dwindles daily.

They had their chance with Biden; but a senile old pedophile just doesn't cut it as the leader of a cult of personality, which is needed for a successful Coup.

The Coup of 2020 is faltering. Opposition is building.

The power to control events is dwindling for the Biden Administration.

The difference is that the Left will commit crimes to see that 2016 never happens again. The Right will just throw fits over 2020.

How exactly is that going to drive turnout? All the hype around this is manufactured by the media and a handful of special interest groups and public protesters.

I am curious about how many rat voters don’t favor abortion, but keep their mouth shut to remain rats in good standing.