It would be humorous if it weren’t so tiresomely predictable at this point. – This might be hard for you to believe, but there are still millions of Americans out there who believe the New York Times is still a “news” organization. That hasn’t been the case since at the least the 1930s, when the Times served as an apologist platform for Adolph Hitler, just as it today serves as little more than an apologist platform for the national Democrat Party.

One of my favorite comedies is “So I Married an Axe Murderer,” starring Mike Meyers in multiple roles. He plays the lead character, and also the lead character’s father. The father is a crusty old first generation immigrant from Scotland who walks around in his underwear passing wind and hurling insults, and who believes that Colonel Sanders is the head of a worldwide conspiracy.

In one of that film’s funniest scenes involves not the father, but the also-Scottish, long-suffering mother, who at one point asks her son “Charlie, hand me the paper,” pointing to a copy of the old supermarket tabloid The Weekly World News.

“Mom,” Charlie replies, “I find it interesting that you call The Weekly World News ‘the paper.’ A paper contains facts.”

Well, if the New York Times in any guide, not anymore.

Over the weekend, the Democrat activists who make up the Times’ editorial board published one of the most outrageous op/ed pieces in U.S. newspaper history, one that crusty old long-time reporter and anchor Brit Hume referred to on Twitter Sunday as being “Beyond parody.” It truly is an amazing case of a stunning lack of self-awareness, highly-predictable hypocrisy and just plain old bad faith to the public interest that the free press is supposed to dutifully protect.

The piece begins with a summary of Tara Reade’s accusations of sexual harassment, sexual assault and what the hypocritical #MeToo movement would characterize as “rape” if Biden were anyone other than the presumptive presidential nominee of its favorite political party. But then the editorial board lurches into this paragraph:

In 2018, this board advocated strongly for a vigorous inquiry into accusations of sexual misconduct raised against Brett Kavanaugh when he was nominated to a seat on the Supreme Court.

Why yes, yes it did. It actually advocated for an investigation not by congress or some disinterested 3rd party, but by the FBI, which, thanks to the media uproar at the time, ended up taking place. And remember, the wild accusations hurled by the obvious liar Christine Blasey Ford had none of the true contemporaneous supporting attestations and evidence that support Ms. Reade’s claims.

In its very next three sentences, the Times then says the following:

Mr. Biden’s pursuit of the presidency requires no less. His campaign, and his party, have a duty to assure the public that the accusations are being taken seriously. The Democratic National Committee should move to investigate the matter swiftly and thoroughly, with the full cooperation of the Biden campaign.

You read that right: Where the Times called for a freaking FBI investigation into a guy who wanted to become one of nine Supreme Court justices, it wants the guy seeking to become the one and only holder of the highest and most powerful office in the land to be investigated by his own political party. If this were 1955, this same editorial board would no doubt advocate that famous mob boss Frank Costello be investigated by a committee of the Five Families.

It’s maybe the most absurd thing ever printed in a U.S. newspaper, but it only gets worse from there. Here’s the very next paragraph, in which the Times literally lays out the DNC talking points on Ms. Reade:

Ms. Reade’s account has some apparent inconsistencies. Last year, she was one of several women who came forward with complaints of Mr. Biden hugging or touching them in ways that made them uncomfortable, but she did not raise the assault accusation until this March. She says she tried to share her story with the media earlier, only to get “shut down.”

First, the #MeToo people have told us thousands of times over the past 2 years that it is entirely common for a woman who has been sexually assaulted to be reluctant to come forward with her full accusations, largely due to paragraphs just like this one printed in the newspapers. This paragraph is a literal outrage in the context of women who have suffered sexual abuse.

And that last sentence, which attempts to lead readers to believe Ms. Reade is not being honest about being shut down by the media earler? On Sunday, the Associated Press admitted to having an interview with Ms. Reade months ago on this subject, only to decide to kill the story.

Think this editorial cannot possibly get any worse? Boy are you in for a disappointment. Several more paragraphs down, we get this little gem:

While understandable, this concern is not prohibitive — and Mr. Biden’s word is insufficient to dispel the cloud. Any inventory should be strictly limited to information about Ms. Reade and conducted by an unbiased, apolitical panel, put together by the D.N.C. and chosen to foster as much trust in its findings as possible. Admittedly, this would be a major undertaking. Mr. Biden served 36 years in the Senate. He turned over nearly 2,000 boxes and more than 400 gigabytes of data to the University of Delaware; most of it has not been cataloged. But the question at hand is no less than Mr. Biden’s fitness for the presidency. No relevant memo should be left unexamined.

You read that right: As its’ justification for failing to call for an FBI investigation as it did in the Kavanaugh case, the Times asks its readers to believe that the DNC – by definition a political entity, and in practice one of the most despicably and aggressively hyper-political entities on the face of the earth – is capable of conducting an “apolitical” investigation of its own nominee.

The suggestion is absurd on its face: Who exactly would the Times suggest placing on such an “apolitical panel”? In this society in which literally everything and everyone has been politicized, it is frankly impossible that such a panel could be assembled by anyone, no matter how well-meaning, and DNC Chairman Tom Perez is certainly not well-meaning.

As for the University of Delaware records, they’ve already been scrubbed, and the Times editorial board knows it. The Biden campaign admits that several of its operatives spent days scouring those records weeks ago. Whatever documents Ms. Reade’s allegations that may have once been there are now safely long-gone and likely burned.

The Times, again as predictable as the sun rising in the West, closes its cynical appeal to the DNC to be “apolitical” with this hyper-partisan final paragraph:

Mr. Biden has set higher standards for himself. That has been central to his appeal. His campaign is founded on the promise of restoring sanity, civility and decency to the presidency. Even if certainty isn’t possible in this matter, the American people deserve at least the confidence that he, and the Democratic Party, have made every effort to bring the truth to light.

You knew there was no way this collection of Democrat activists could get through 500 words without at least one attempt to smear President Trump, right? Of course you did.

The notion that Joe Biden has set “higher standards for himself” is laugh-out-loud ridiculous. This is a guy who, on the campaign trail, has continued his habit of fondling children and women, holding them too close, sniffing them and rubbing them with his spindly fingers. He is a guy who has on multiple occasions this year challenged attendees at his own rallies to go outside for a fight. This is civility? This is decency?

And as for “sanity,” well, let’s also be honest and recognize that Biden is also a guy who has repeatedly and clearly demonstrated that he often has no idea where he is, often is incapable of reading from a teleprompter, needs to have his despicable wife sitting next to him to keep him on message and has only a sporadic acquaintance with reality.

Joe Biden is not capable of handling the office of the presidency, and the Times editorial board knows this. But they just keep lying to their readers on behalf of the Democrat Party nevertheless.

Beyond parody, indeed. Beyond decency, in fact.

The Babylon Bee does better reporting

Maybe the DNC will pick the non-partial team of Brennen, Clapper and Comey.

NY Times operating on pure manipulation regardless of absurdity. It’s like the denials by the the Rosenbergs and Alger Hiss. They know it laughably false, but that is not the point, and they don’t care if you know it.

NY Times operating on pure manipulation regardless of absurdity. It’s like the denials by the the Rosenbergs and Alger Hiss. They know it laughably false, but that is not the point, and they don’t care if you know it.

This could not have been written by someone at that great paper the NYT could it? It was probably accidentally transposed from the 0nion or the Babylon Bee. Surely so. Has to be. NYT doesn't make jokes! Really??

Since we totally made up a bunch of phony charges - with ZERO proof - against Brett Kavanaugh to try to keep him off the Supreme Court and to ruin his life and his family's life in the process, and this later came back to bite us in the form of Tara Reade's totally believable charges, which are bolstered by contemporaneous witnesses, including ACTUAL VIDEO, we the Left should get 24 mulligans with the charges against Trump that failed spectacularly in 2016.

Biden himself said that the FBI should investigate such allegations - when it was Kavanaugh. 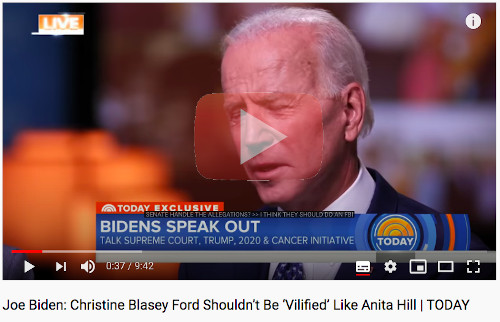 I have to wonder if Blackmon wrote this after watching the opening few minutes of Mark Levin’s Sunday night show with guest Joe Concha... if so, he should have given credit to Mark. 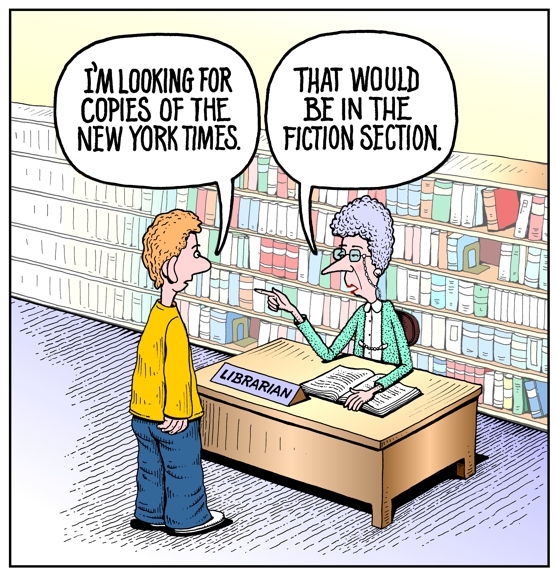 The Times asks its readers to believe that the DNC is capable of conducting an “apolitical” investigation of its own nominee.

#MeToo is officially dead. As with most of the lies on the Left, the lie of protecting women turns out to be another false front for Leftist Activists who have only one advocacy - Power.

The #FingerMeToo is really the last nail in that coffin.

If I remember correctly didn’t the NY Times, in the 40s, when rumors of Hitler’s genocide began to trickle out of Europe, suggest a non-partisan investigation by leadership of the Nazi party?

Okay, I made that up. But still - you’ve got to admit - the logical parallel is spot on.