Joe Biden: An Empty Vessel Waiting to be Filled by the Ideas of Others
DB Daily Update ^ | David Blackmon

And now, a word from Joe Biden’s basement. – Some would call this ‘mixed messaging.’ Others would call it vacant eyes and an inability to form words into coherent sentences. But the Democrat Party wants you to believe it’s all just totally normal.

Trump War Room - Text TRUMP to 88022 ✔ @TrumpWarRoom Joe Biden: “We cannot let this, we’ve never allowed any crisis from the Civil War straight through to the pandemic of 17, all the way around, 16, we have never, never let our democracy sakes second fiddle, way they, we can both have a democracy and ... correct the public health.”

This was why President Donald Trump was right when, in Saturday’s Coronavirus Task Force presser, he had the following exchange with a corrupt reporter:

Reporter: “Joe Biden just attacked you in a tweet… Did you see it?”

Trump: “He didn’t write it. He wished he did. A democrat operative wrote it. He’s not even watching right now and even if he is, he doesn’t understand what he’s watching.”

In all seriousness, can you imagine a debate between the President and Joe Biden? It would be absolutely brutal. Trump would torment Biden in the same way my cat Max torments a lizard for an hour in my backyard before finally deciding to either let it go or eat it. Most often the lizard becomes a kitty snack, but either way, he’s not having any fun or scoring any points.

The President is absolutely correct when he states that Joe Biden does not write his own tweets. Hell, it’s doubtful Biden even reads his own tweets, much less writes them. He probably doesn’t even know what Twitter is at any given moment in time. You know how you can tell Biden doesn’t write the tweets? Because the tweets are made up of coherent, properly punctuated sentences that read nothing like Biden’s actual voice and speaking pattern.

The hilarious part of them in recent days is that the tweets from Biden’s account mainly provide advice to President Trump to do things related to the Wuhan Virus outbreak that the President and his administration already did weeks before. Here’s a great example from over the weekend:

Joe Biden ✔ @JoeBiden Every day that Donald Trump refuses to use the full power of the Defense Production Act further threatens American lives.

69.2K 3:00 PM - Apr 5, 2020 Twitter Ads info and privacy 18.3K people are talking about this Of course, the truth is that the President activated the Defense Production Act three weeks ago. Since that time, he has used it as a hammer to encourage U.S. companies to convert their facilities to produce millions of items of PPE and thousands of ventilators, among other things. When encouragement didn’t work, he invoked its provisions against 3M to do so. It is very likely he is using the DPA right now to encourage Saudi Arabia – which is 100% owner of the Motiva Refinery in Port Arthur, Texas – to re-engage with Russia to cut oil production in an effort to settle the oil markets down.

And yet, there’s Biden’s tin ear staff tweeting as if nothing has been done. It’s not only dishonest, it’s demented, which is totally in keeping with the state of the candidate himself.

Joe Biden is not a credible candidate for the presidency – it really is that simple. This is a man whose political prime came and went during the Carter and Reagan administrations. No one who is being honest with themselves believes he is capable of handling the intense pressures of the highest office in the land. The truth about him is that he never really was capable of doing that.

But the Democrat Party is stuck with him, and they did that to themselves voluntarily. They have given themselves a little more running room with their needless postponement of their nominating convention from July until August, but that just puts off the inevitable reckoning to come.

The truth about Joe Biden is that he has never been anything more than an empty vessel waiting to be filled by the ideas of others. Sadly for him – and potentially for America – the others who are currently doing the filling are no brighter than he is.

I heard that Joe is down in his basement sitting on the tv watching the couch.

He is a senile, corrupt, clueless has-been with a collection of influence-peddling associates, both family and enemies-of-state customers So vast he should have been tried many times over the suggestion that he is legitimate is absurd

I cannot see anything more anyone could have to say about him.

Somewhat reminiscent of 1996 when the Republicans ran Bob Dole. Dole was far more intelligent, competent and honest than Biden but he represented the last hurrah of an era that most Americans did not know. Sadly the vile Clinton won easily.

Joe Biden if elected will just be a cardboard cut-out facade for the Valerie Jarrett administration.

Which is to say he would indeed be Barack Obama’s 3rd term.

The Democrats are in a corner.

They rejected Bernie and went all-in with Biden. People have been saying for months that Biden has mental problems, but the Democrats turn a deaf ear and basically say “No he doesn’t! No he doesn’t!”

The day will come when Joe has to bow out. And then the Democrats will say, “Everybody knew he had a problem. It’s old news. Can’t we just move on?”

People want transparency. Democrats cannot provide that. One of the great things with President Trump is that people understand who he is and where he’s coming from. What you see is what you get and people like that.

When he loses in November you can bet that the libtards are going to blame it on the Coronavirus. Bank on it!

With a hole in the bottom...wont hold water.

Anyone who votes against Biden is Dementiaphobic.

The lights are on but nobody is home.

The press sounds more and more like high schoolers.

"OMG, did you hear what Becky said about you?!"

Which explains why Biden already has 47% of the vote locked in. In a sane world, there is no chance Biden could win, but we do not live in a sane world. No one should underestimate Biden. He absolutely could win. Much is riding on who his VP will be.

He'd be a figurehead just like Barack Obama, their ideal President.

The hidden cabal that runs the Democrat Party and controls the left would control the Presidency again.

They might even succeed this time is seizing control of the entire USA, with all its vast wealth and power, and subverting it all to their own benefit, which has long been the Democrat Dream!

Along the lines of Communist China or North Korea.

They could dress Biden up like they did Obama, create the illusion in the minds of the Sheep that he's another Messiah, a Greattt and Brillianttt Mannnn--just like Obama.

That's the sort of thing they do.

In Lower Slobovia, they'll love him--shower Biden and the Democrats with rose petals--and money--and love the slavery into which they're thrown!

That's why they hate Trump so venomously! He sees it all and is determined to prevent it--to save the USA.

Trump blocked their nefarious plans! That's why they hate him!

Big problem for the Dems - so far in the Primaries, Clueless Joe has over 10 million votes. How are the Dem party Boses going to tell those 10 million that their vote didn’t count?

Joe Biden’s candidacy is a personification of the children’s story about the emperor with no clothes. Except this time it is being told over and over by and for alleged adult Democrats. 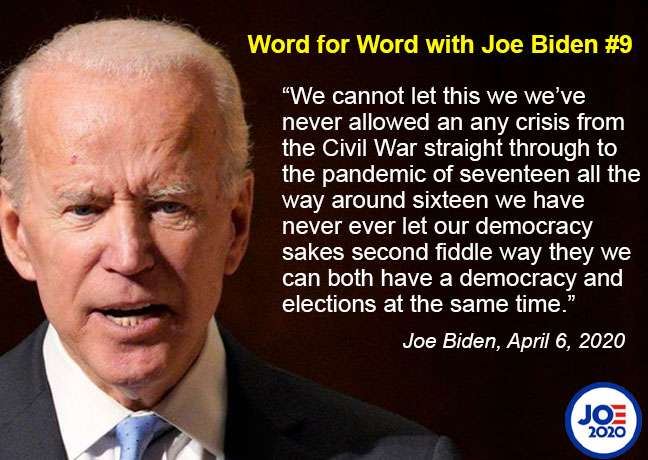