Excellent! We have our first Cruz Birther Suit.

We all remember the questions regarding Big Guyâ€™s eligibility as a natural born citizen and some of us still wonder what his real birth certificate said. 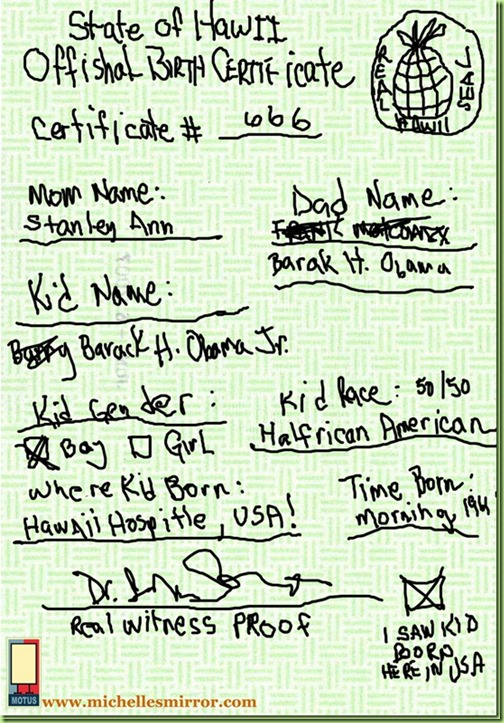 Although much was written about the rumor that BHO was born in Kenya rather than Hawaii, that was never the real issue. Since Barryâ€™s father was clearly not American the real question - while nowhere near as sexy â€“ was whether his American born mother was actually old enough to confer natural citizenship on her son, regardless of where he was born.

The statutes in effect at the time (the same statutes in effect when Ted Cruz was born in 1970) required that the American citizen parent had to have resided in the U.S. for ten years, including five years after the age of fourteen. Ted Cruzâ€™ mother clearly met that requirement, whereas BHOâ€™s mother, having given birth at the tender age of 18, simply wasnâ€™t old enough to have confered that status on her son.

Under the law in effect when Cruz was born in 1970 (i.e., statutes applying to people born between 1952 and 1986), the requirement was that, at the time of birth, the American citizen parent had to have resided in the U.S. for ten years, including five years after the age of fourteen. Cruzâ€™s mother, Eleanor, easily met that requirement: she was in her mid-thirties when Ted was born and had spent most of her life in the U.S., including graduating from Rice University with a math degree that led to employment in Houston as a computer programmer at Shell Oil. - Ted Cruz, Natural Born Citizen

According to Andrew C. McCarthy:

The founding fathers did explain what they meant by (natural citizenship), and there are several statutes that explain it further. The point being: a natural born citizen is anyone born of an American parent, providing that the parent spent a certain amount of years in the United States as an adult.

Ted Cruz is a natural born U.S. citizen in accordance with (a) the original understanding of that term, (b) the first Congressâ€™s more demanding standard that took both parents into account, and (c) the more lax statutory standard that actually applied when he was born, under which birthright citizenship is derived from a single American-citizen parent.

Butt we all know nothing is that easy. So Iâ€™m conducting my own poll to see who we think is eligible to be President. NOTE: you can disqualify candidates for any reason i.e. candidate is a future felon. However, if you choose to go that route you will need to provide sustainable evidence of said offense and/or original Constitutional language and/or subsequent statutes supporting your position. WARNING:  poll may also contain trick questions.

Choose wisely, as Iâ€™ve been forced to change polling services and Chicago rules no longer apply (unless you feel like clearing your cookies in order to vote again, in which case have at it, butt without my approval of course).

Note the reference to Natural Law in the first sentence of our Declaration of Independence.

It is crystal clear that the Founding Fathers used the Natural Law definition of 'natural born Citizen' when they wrote Article II. By invoking "The Laws of Nature and Nature's God" the 56 signers of the Declaration incorporated a legal standard of freedom into the forms of government that would follow.

President John Quincy Adams, writing in 1839, looked back at the founding period and recognized the true meaning of the Declaration's reliance on the "Laws of Nature and of Nature's God." He observed that the American people's "charter was the Declaration of Independence. Their rights, the natural rights of mankind. Their government, such as should be instituted by the people, under the solemn mutual pledges of perpetual union, founded on the self-evident truth's proclaimed in the Declaration."

The Constitution, Vattel, and “Natural Born Citizen”: What Our Framers Knew

The Laws of Nature and of Nature's God: The True Foundation of American Law

The Supreme Court of the United States has never applied the term “natural born citizen” to any other category than “those born in the country of parents who are citizens thereof”.

MINOR V. HAPPERSETT IS BINDING PRECEDENT AS TO THE CONSTITUTIONAL DEFINITION OF A NATURAL BORN CITIZEN.

"The citizenship of no man could be previous to the declaration of independence, and, as a natural right, belongs to none but those who have been born of citizens since the 4th of July, 1776."....David Ramsay, 1789.

A Dissertation on Manner of Acquiring Character & Privileges of Citizen of U.S.-by David Ramsay-1789

The Law of Nations or the Principles of Natural Law (1758)

The Laws of Nature and of Nature's God: The True Foundation of American Law

Publications of the Colonial Society of Massachusetts, Volume 20 - Use of The Law of Nations by the Constitutional Convention

Precedent Obama has rendered that clause moot.
Under the current definition of simply being born a citizen, if even only on one’s mother’s side, makes every anchor baby and Winston Churchill eligible. (his mother was an American)

I went to school in the 1960’s and was taught that natural born citizen was a subset of citizen and required only for the office of President. Must be born here to citizen parents. Reading the writings of the people who wrote the Constitution confirms this. They wanted no divided allegiance. If you could be anything other than a U.S. citizen, you can’t be a natural born citizen. No foreign births, no foreign parents.

Many people wanted the definition changed for various reasons. The Republicans had many more ineligible people coming up than the Democrats so they gave Obama a pass.

Having an usurper in office has not been good for the country, has it?

Mr. Sincerity himself, Alan Grayson, threatened to file suit in November 2015, and is going after this “birther” thing hammer and tongs. This particular suit was filed by another Texan, a Houston lawyer, Newton B. Schwartz Sr.

The reason that none of the suits against the Current Occupant were allowed to go anywhere was that none of the challengers “had standing” to file, i.e., they were not harmed by the fact that the Current Occupant’s birth data impacted them in any way. Technically, the only person “having standing” might have bee no less than Herself, in 2008, who was “harmed” by the aggressive pursuit of the Democrat nomination by no less than Barack Hussein Obama. And if Herself would not pursue it then, what grounds would Herself or anyone working on the behalf of Herself have to bring it up today?

So far, nobody “has standing” to bring this particular suit, not even if that person is another lawyer.

The earliest laws on the subject passed by Congress have at least 2 additional provisions that must be met for the child born overseas to be considered as a US citizen.

Wonder why F Grayson didn’t go after Obama’s BC issue. After all, Obama wrote a book, stating he was born on Kenya, his mother was 16, when she got pregnant, so she was 17 when she delivered, not 18. She was NOT of age to confer citizenship. Grayson is going after Cruz because he fears his conservatism. We should all be signing a petition for the judge to drop the suit. Obama is actually not a valid citizen, having become a citizen of Indonesia and holding that passport. He came to Occidental as a foreign student. If the rules don’t apply to Obama then the Constitution has already been breached.

Wonder why Grayson didn’t go after Obama’s BC issue. After all, Obama wrote a book, stating he was born on Kenya, his mother was 16, when she got pregnant, so she was 17 when she delivered, not 18. She was NOT of age to confer citizenship. Grayson is going after Cruz because he fears his conservatism. We should all be signing a petition for the judge to drop the suit. Obama is actually not a valid citizen, having become a citizen of Indonesia and holding that passport. He came to Occidental as a foreign student. If the rules don’t apply to Obama then the Constitution has already been breached.