It’s Sunday and I guess there’s nothing else happening in the world other than the Super Bowl. Before our big party begins today, Big Guy’s having another sit down with Bill O’Reilly; which is rather odd as everyone knows how he feels about the Fox News Network. 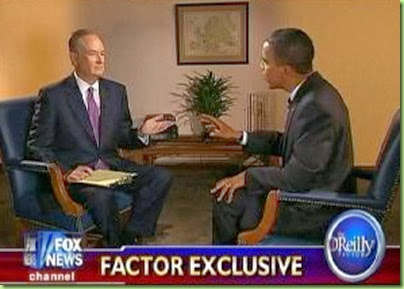 Last fall BO accused Fox of lying about the increased costs of Obamacare, and just last week he complained that Fox and Rush have prevented him (the greatest orator of all time!) from getting his message out:

"... the issue has been the inability of my message to penetrate the Republican base so that they feel persuaded that I’m not the caricature that you see on Fox News or Rush Limbaugh, but I’m somebody who is interested in solving problems (with my pen and my phone)"

To which Charles Krauthammer (Fox News contributor) responded that it was "rather unseemly" for the President of the formerly free world to be "so whiny."

"You've got NBC, ABC, CBS, PBS, CNN, of course MSNBC. You've got Hollywood that's sympathetic, you've got the television entertainment side. You've got the major newspapers, The Times, The Washington Post. It's what Lenin would call 'the commanding heights of the culture' are all on one side. All of them. And what do you have on the other side? Fox News and talk radio. And you've got a President of the United States complaining that that explains the failures of his administration,"

I hope Bill is polite to Big Guy because otherwise…well, BO does have that pen; and he knows how to use it: 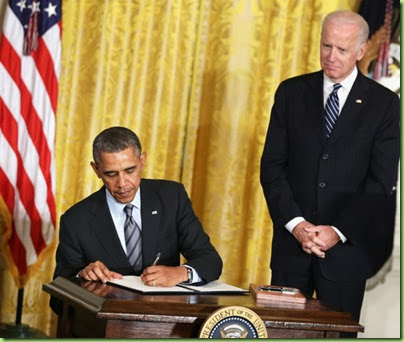 Joey, witnessing the signing of a memorandum directing the federal government not to discriminate against long-term unemployed job seekers. 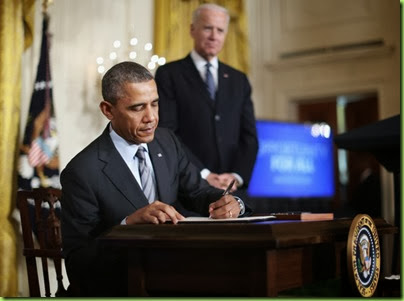 Joey, witnessing the signing of a memorandum directing the federal government not to renew Fox News Network’s broadcasting license.

So if he’s not real careful about how he handles Big Guy, Bill’s next book might not be a New York Times best seller. 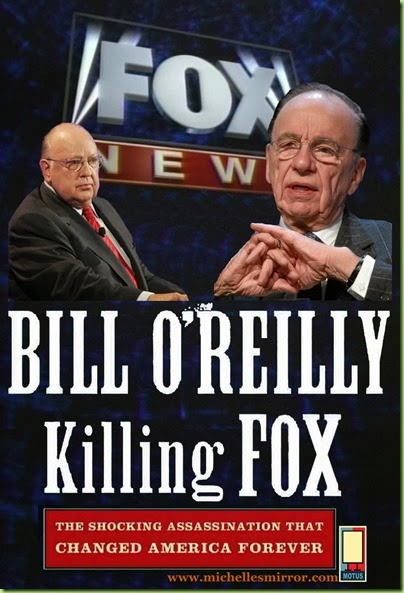 So I’d say, watch your tails, Fox! The Redcoats are coming! 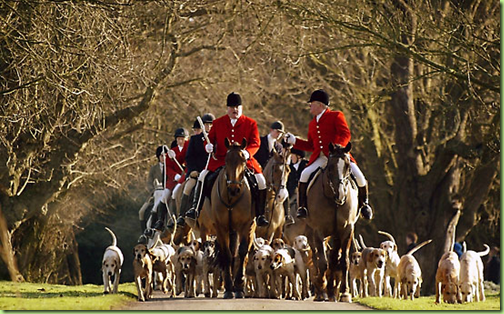 Although I have heard that some of Fox are armed and dangerous. 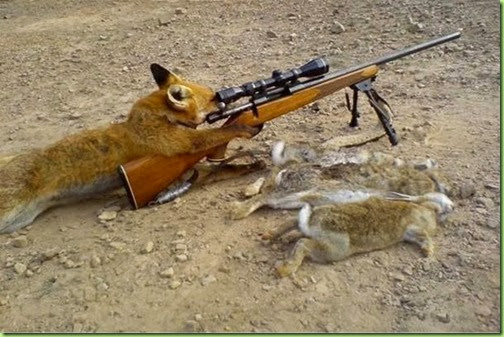 So here’s my prediction: Both Bill and BO will be on their best behavior, which is to say boring. And the game? Does anyone really care who wins? We’ve already seen all the really good commercials and halftime won’t be anywhere near as good as the Grammies. So I say turn the game on in the background, listen for cheers at which point you can back up the DVR and watch the touchdowns.Meanwhile, enjoy your favorite healthy snacks and beverages while reading a good book. 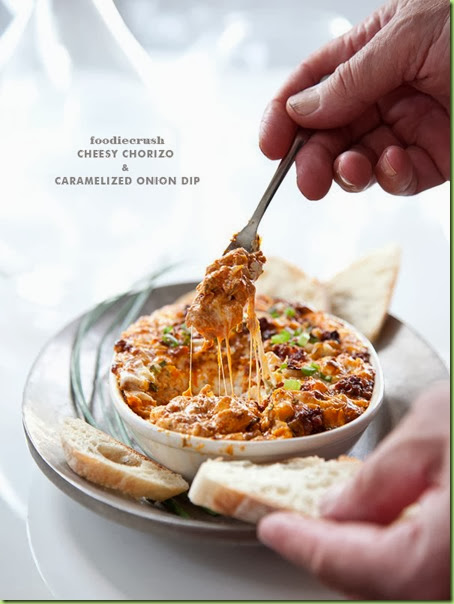 1. Remove chorizo from casing and cook in a medium skillet over medium high heat for about 10 minutes, chopping with spoon and stirring occasionally. Set aside. If greasy remove excess grease.

2. In another skillet, melt butter over medium heat and add onion. Add thyme, season with kosher salt and lower heat to medium-low and cook onion for about 20 minutes until onions become soft and caramelized.

4. Place on a baking sheet and bake at 350 degree F for 12-15 minutes or until dip is golden and bubbly. Garnish with additional green onion and serve with baguette slices or tortilla chips.

And remember, he may be wily, butt the Fox will be looking out for you. 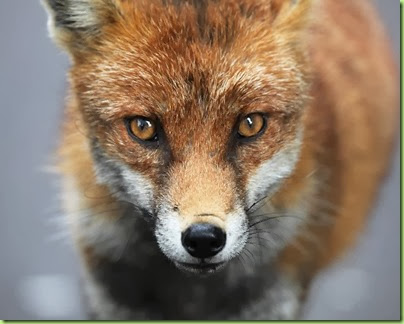 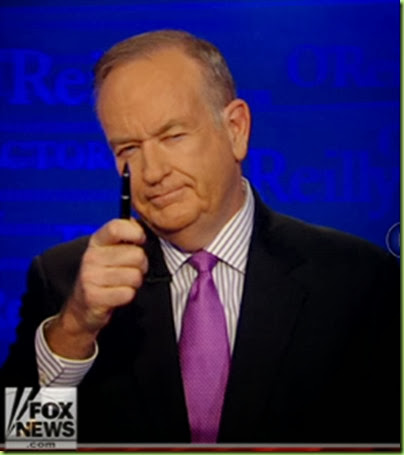 No matter who asks the questions, obama is NOT going to answer anything with the truth. He’ll just give his old song & dance & steer the interview to the way he wants. So nothing will be gained here.

The BOR wont ask any hard questions. He don’t want to crash the gravy train.
If Obama had real guts, he would appear with Rush.

O’Reilly said that this is two Alpha males going at it. When I got done laughing,I needed a bathroom break!

"How am I doing so far? Do you think I'm being fair, Mr. President? Are you sufficiently impressed with my penetrating questions and intense demeanor?"

6 posted on 02/02/2014 10:38:27 AM PST by Caipirabob (Communists... Socialists... Democrats...Traitors... Who can tell the difference?)
[ Post Reply | Private Reply | To 1 | View Replies]
To: NOBO2012
Politics and football don't mix, but communists must indoctrinate the masses at the most opportune times. Politicizing the Super Bowl is WRONG. People watch this game TO GET AWAY FROM LIFE'S DAILY GRIND, not to be subjected to MORE OF IT!

I think Obama AND O'Reilly are both jealous there's a football game that gets more attention than THEY do. They're like two little boys trying to photobomb a wedding picture.

No, this is one narcissist refraining from asking ANYTHING which might jeopardize a future interview with another narcissist.

The Superbowl should be an OBAMAFREE ZONE.

and if the POS leads with his chin on any answer, bet that BOR will not ask a follow up question to put him farther into the box. No, one softball after another. I bet just to be sure, BOR has been given a list of areas to stay away from and or he has provided all the questions in advance for clearance. No way this is a free flowing interview going out on live TV with no bounds on the content. I hope someone gets a shot of the teleprompter with the answers spelled out for the joker.

I am going to make sure the batteries in my channel changer are fresh so I can turn that crap to a different station.

Sometimes MUTE is just not enough.

Bill does good talking points memos and can be a very aggressive, focused interviewer.

But he goes off to the nutty farm too often, as when he endorsed a raise in the minimum wage.

O’Reilly will go all Miley Cyrus on him and start twerking on national TV.

Will anybody really watch this charade? O’Reilly is already defending himself against all the charges of being an ass-kisser, because he knows that’s what he’ll be.

BOR is just insufferable. He has been bragging about this all week. The other talking heads on FOX have been touting it all day and all week. BOR will talk about it all next week and the week after to talk about how great he was and what a “fair man” he is in order to defend his softball interview with the won. I can’t stand either one of them. Pompous asses both of them. Why anyone would want to watch this is beyond me.

While the world is engrossed in football, the two ZERO’s will be playing softball.

BOR is a boot licking ass kisser, and so is Fox.

Why do demonrats think O’Pukey is a conservative? I think his parfy affiliation is somewhere between giant douche and turd sandwich.