The photo of this billboard, inviting illegals to move to Los Angeles, looks Photochopped. It came to me via email, but my virus protection sent off warning signals so I found another copy elsewhere. If anyone in Arizona has seen it, please let me know. 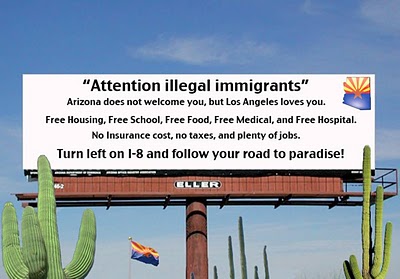 Its fake (from someone who obviously doesn’t have a map either).

I love my state but this stuff is so far out of control I don't know if we can ever turn it around. :(

I just got this picture in an email from a friend. It is absolutely wonderful I hope all these illegals do go to Los Angeles. I don’t think there is a more deserving group anywhere in the world than the group that lives in Southern California. My wife and I left San Diego 8 years ago for the Northwest, we’ve never been back and have no plans to ever visit.

Nice touch to add the cactus and the state flag too!

It is an obvious photoshop.

Mayor Blooming-idiot of NY invited all Arizona’s illegals to come to New York. Good housing and good health care too.

Talk about an idiot. Guess he feels the people actually paying taxes in NYC would welcome another burden.

Might be fake, but there’s nothing stopping a private individual from doing this. Free speech, etc.

A billboard costs what, a couple thousand bucks for a few weeks? Somebody out there can afford it.

Might be worth it just to see the reaction in LA.

To be consistent LA should pay to put up these signs. But do NOT hold your breath.

Illegals can’t read anyway. It should be in Spanish. Fodder for the gringos! Photoshopped to.

Hey, swing by Utah; we LOVE them here too.

For example, did you know that if you are Illegal, you don’t have to count your family income for Food Stamps? So, take 2 families - Say the Jones and the Gonzales families. Both married couples with 2 kids.

The Gonzales family has 1 anchor baby, so they qualify for Food stamps. In Utah, the state does NOT consider income from illegal aliens - so their family income is $0/wk.

Meanwhile, the hardworking and taxpaying Jones family has to declare $1,250/wk as their family income.

The State of Utah then gives the Gonzales family (who pay NO taxes) the maximum Food Stamp benefit; while the Jones family with a pre-tax weekly income of $1,250/wk little, or no benefit at all.

So, come here ... bankrupt us ... we are so stupid, we deserve every bit of misery we can get.

I am lousy at PhotoShop, and could likely do better.

Well maybe just no worse than that.

Nah, let 'em use I-8 out of Tuscon. San Diego has essentially become just as liberal as Los Angelas. SD is now just a mere suburb of LA.

Funny but if it were real it would be in Spanish.

The reflectivity of the white background is uniform. It never happens. Even in bright sunlight some parts would appear brighter than others.

The selection marks on the cacti are so obvious.

Cactus AND an Arizona flag in the same frame.. yes , yes we understand you are telling us it was taken in Arizona, but don’t overdo it.

I-8 west will take you to San Diego, not LA. I drove there a few weeks back.