Not much action coming out of the AG BARR news conference.

If those people are as weak as they sound, we are all of us in trouble. They seem incapable of doing what’s required.

Bringing this over from another thread, food for thought.

Probably the nastiest comment on his twitter was from the fellow African American, who sneered at him: “Moved from the field to The house, huh?”
@@@@@@@@@@

This statement tells it all. Heard a Smithsonian speaker on the way slaves were chosen to be in “the house” vs “the field”. His theory was those chosen for the house were those that “seemed more intelligent and docile in manner”.

His theory based on records showed that slaves from Eastern Africa ( think Ethiopian Christians) we’re familiar with biblical names, stories, and early hymns and therefore were therefore more easily assimilated into life in the house. We have two people groups with a common religious background although two totally different languages.

He contrasted this with slaves from north and west Africa who were tribal in nature with a multitude of beliefs, many different languages as well as grouped with enemies on the ships. Much more violence, these were free and independent people groups unwilling to be enslaved.

Again contrast this with the Christian slaves who knew that God works all for good according to His purpose and the example of the 400 years of slavery of the children of Israel. How could they know their current circumstances were not part of Gods plan for them.

This background also helps one see the 180 out actions between the peaceful citizens that seek positive change for actual or perceived wrongs in America vs those that seek violent overthrow of a system they see that is stacked against them systematically.

Perhaps the issue is simply one of a Christian Worldview vs a Hedonistic Worldview. Perhaps the real answer for our time is prayer and revival in our land.

Just food for thought for a thinking people.

Fox cut off the feed even before Wray was finished?

Some people are going to hate this. So be it. I am merely presenting, and remain a fence sitter but to me black/white hat doesn’t matter; it’s leverage. Looks like a sting, to me. I realize a lot of people here do not like Brian Cates but a wise person will pick up gold from a gutter and accept useful info even from a source which is not always right.

How bad was Rosenstein’s testimony for the FBI yesterday?

The DOJ supervisor of the Russia investigations testified under oath that the SpyGate plotters managed to convince him to appoint a Special Counsel & keep going with their fraud by hiding a ton of evidence from him.
Senate questioners got Rosenstein to discuss at length just how much exculpatory evidence the FBI’s Crossfire Hurricane team didn’t show him.

As with the FISA Court, the plot could only advance by proffering fake evidence while hiding the real evidence.

The Hill@thehill
Rosenstein says, in retrospect, he would not have signed Page warrant application http://hill.cm/Wj1rr4s

While stating some whoppers himself (such as claiming not to have known Steele was a paid flack for the DNC/Clinton campaign) Rosenstein told a story about coming late to the party & being hoodwinked by the people he was supervising at the FBI.
Among other things, Rosenstein discussed how the FBI

1. Hid from him that the informant who’s info was used in the warrant to place Carter Page under suspicion of being a Russian agent was a paid political operative of the DNC &the Clinton campaign
2. Hid from him that when the Page warrant was up for it’s first renewal in January 2017, the source Steele used for the warrant allegations completely disavowed them during an interview with FBI agents.
3. Hid from him the full recordings of undercover informants who got Papadopoulos on tape making several explicit exculpatory statements, such as how accepting Russian government help would be treason, and he had no knowledge of anyone in the campaign accepting Russian help.
4. Hid from him the FBI’s plan to continue to investigate General Michael Flynn, Trump’s incoming NSA, even though months of spying on him by January of 2017 had failed to turn up any evidence against him.
5. They also hid from Rosenstein how they had plotted to set Flynn up to ‘find’ a crime to accuse him of in order to get him fired.
Comey testified that Steele’s information, information he was paid by the Democratic Party to invent, was “salacious and unverified “.

How, then, with supposedly rigorous protocols in place to protect the civil liberties of US citizens, was unverified info used to spy?
If the rules, laws and protocols for FISA warrants had been followed, the Carter Page warrant using unverified info never gets submitted to the FISC in the first place, never mind getting renewed three times.
Rosenstein eagerly pointed out the bogus warrant had been granted by the FISC in October 2016, then renewed twice in January and April 2017 before he got there as DAG on April 25.
So his story is he’s an administrator being handed finished work product from people he’s supervising and this warrant has already passed muster three times, through the granting of it and two earlier renewals.
So he’s being asked why he agreed to renew and sign off on a warrant like no other warrant before it, one that started out allowing allowed legal surveillance of a presidential campaign that had morphed into spying of a sitting President’s administration & he says...
“I trusted these people”.

Pretty much, that’s the story.

He didn’t say “I didn’t trust those lying creeps at the FBI at all, so I went over this warrant exhaustively!”
Now it’s plausible deniability here.

We do find in Horowitz’s FISA Abuse Report how Crossfire Hurricane team members had this exceedingly nasty habit of not volunteering key information to superiors.

My favorite example of this is how 1 agent tried to bamboozle Stuart Evans.
Stephen Somma is “Case Agent 1” in the Horowitz report.

Evans is the head of the FBI’s Office of Intelligence (OI).

It’s early October 2016, the Crossfire Hurricane team is furiously trying to get the Page warrant approved ahead of the election.
Evans seems to be about the only person trying to follow the protocols and do due diligence on this warrant.

So he has a question asked of the CH team.
“Does Steele, the informant who’s info you are making use of in this warrant application, have any ties to any political campaign or group?

Somma, the CH agent handling the FISA for the team, gives an evasive answer.
Somma answers that Steele is a UK foreign national and therefore cannot donate to US political campaigns.

Immediately noticing that the answer to his question wasn’t “Why no, of course not!”, Evans asks it a second time.
An increasingly nervous Somma gives the same answer back. Steele is a foreign national, he can’t donate to US politicians.

Evans then has the question asked for a THIRD TIME.

Somma finally realizing he’s not getting out of this, coughs up the truth.
Evans is stunned to discover the CH team is taking allegations from someone working for the Hillary Clinton campaign & using it to get a surveillance warrant in the Donald Trump campaign.
But even AFTER this admission is made, the warrant sails through.

Too many people on the FBI’s 7th floor wanted this done.

So even when someone followed the protocols & discovered the truth, Comey & Co. kept it moving forward.
So if it’s clear from the evidence that the FBI Crossfire Hurricane team members weren’t volunteering key facts to their own coworkers at the FBI who were trying to follow the rules, it’s not a stretch they hid a lot thing from Rosenstein.
It’s now looking as if the story is going to be hapless Rosenstein, trusting the FBI people he was supervising, got hoodwinked by these SpyGate plotters and he’s only too eager to say so under oath again at their trials.
Having said this under oath on national television, it’s now clear what Rosenstein’s story at the trials will be:

“They managed to proceed with their illegal investigations of Trump & his associates (which is really a coup attempt) only by deceiving me.”
This is why both McCabe & Lisa Page quickly responded to attempt to impeach Rosenstein as a witness against them in the courtroom.

“Why, that guy’s lying! We didn’t hide anything from him! We did nothing wrong, this is just Rod endorsing Trump’s stupid conspiracy theory!”
So the SpyGate plotters are going to make two key claims to attempt to impeach Rosenstein’s testimony against them:

1. This guy is lying about us “hiding” anything from him

2. We did NOTHING WRONG, our investigation of Trump was by the book!

#1 is debatable. #2 is a lie.
There was an illegal investigation that involved spying. There was a coup attempt.

Rosenstein will testify to it and thereby hand Barr & the DOJ all the major SpyGate plotters. Comey, McCabe, Strzok, Lisa Page, Somma, Baker, Pientka, Ohr, Yates & several others.
How far up the chain they go, we’ll see.

It’s interesting to read the comments going from “nobody’s going to be indicted!” to “We don’t get Rosenstein too? All we get are a dozen other people, Comey, McCabe, Strzok, etc.!?!?! I don’t care any more!”
The role Rosenstein plays at the trials changed. I thought it would be “I played along, I let them hang themselves”.

Instead, he’ll still be a witness for the prosecution, but he’ll be testifying “These lying pr**ks tricked me!”

68 posted on 06/04/2020 10:00:58 AM PDT by little jeremiah (Courage is not simply one of the virtues, but the form of every virtue at the testing point.)
[ Post Reply | Private Reply | To 47 | View Replies]
To: Gulf War One
If those people are as weak as they sound, we are all of us in trouble. They seem incapable of doing what’s required.

Totally boring so far. And fawning over the Floyd stuff.
But needed for public consumption.

Thanks, MQD, for the new thread.

I think this lockdown must have really affected some people’s attitudes. I was booking a flight the other day, to visit my Dad in August for his 100th birthday, and the airline woman on the phone seemed a tad short with me. All I did was tell her I’d like a center seat or aisle and she barked back “or you’ll what?”

Not sure where summer is today.. it’s 66’ outside! And I’m in So Cal where the sun shines most of the time :D.

If those people are as weak as they sound, we are all of us in trouble. They seem incapable of doing what’s required.

Necessary for public consumption. The ATF acting head has good info. THey are boring speakers and Barr is not usually boring. This is the first public info about what the feds are doing. It is the velvet glove. 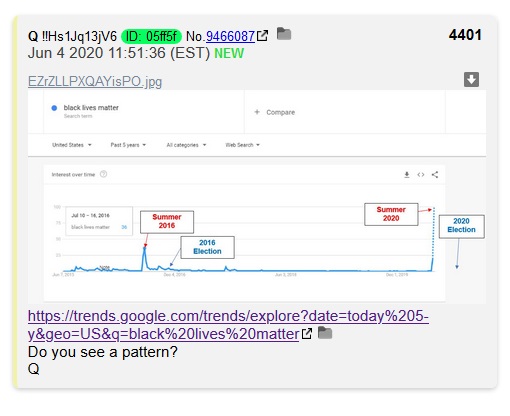 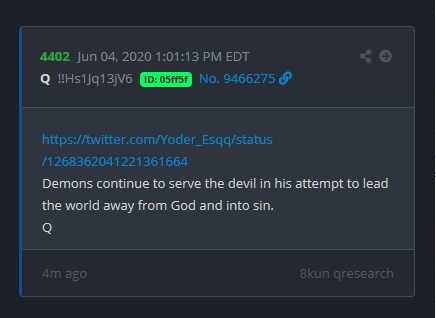 It’s a large club in DC and we aren’t in it. (We are required to finance it thou)

When will we start chanting NO JUSTICE NO PEACE !